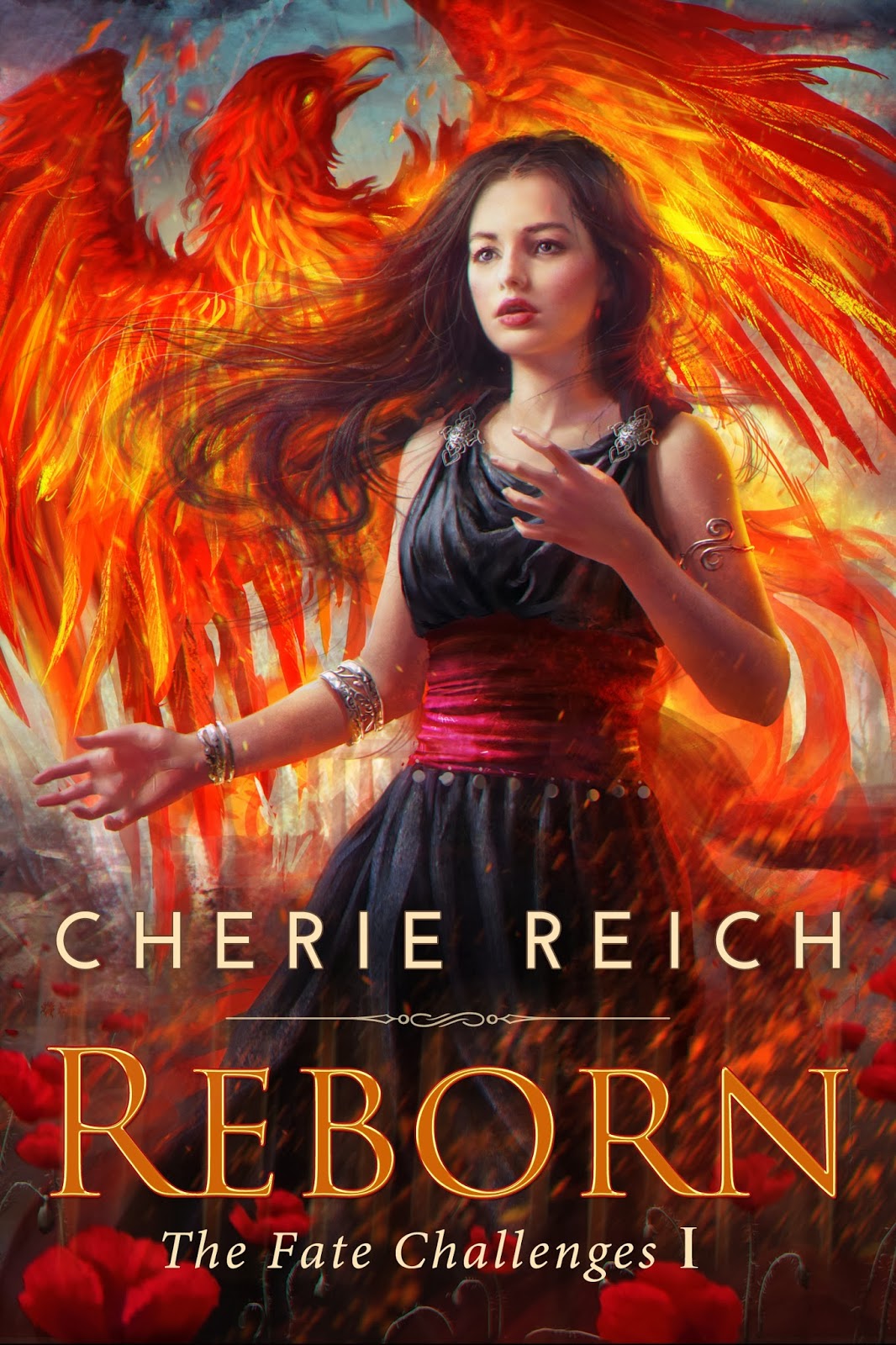 Book Description: To save a kingdom, a prophetess must challenge Fate.

On the day of Yssa’s death and rebirth, the god Apenth chose her as the Phoenix Prophetess.

Sea serpents and gods endanger the young prophetess’s journey and sour the omens. Yssa is cursed instead of blessed, and her duties at the Temple of Apenth prove it. She spends her days reading dusty scrolls, which does nothing to help her forget Tym, the boy back home. But the annoying yet gorgeous ferryman’s son Liam proves to be a distraction she can’t predict, even though he rarely leaves her alone for two sand grains.

Her boring temple life screeches to a halt when visions of her parents’ murders consume her. Yssa races across an ocean to stop the future. If she can’t change Fate, she’ll refuse to be the Phoenix Prophetess any longer. Fate, however, has other plans for her and the kingdom.

Yssa must either accept her destiny or fight to change Fate. 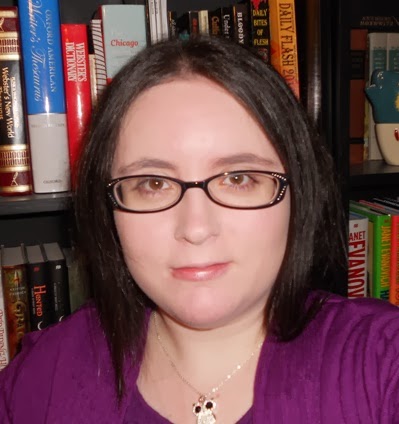 Author Bio: A self-proclaimed bookworm, Cherie Reich is a speculative fiction writer, freelance editor, book blogger, and library assistant living in Virginia. Her short stories have appeared in magazines and anthologies, and her ebooks include the horror series Nightmare, a space fantasy trilogy titled Gravity, and a fantasy series The Foxwick Chronicles. She is Vice President of Valley Writers and a member of the Virginia Writers Club and Untethered Realms.

Her debut YA Epic Fantasy novel Reborn, book one in The Fate Challenges, will be released on May 23, 2014.

The infant lay limp upon the table, a thin cloth separating her from the wood. Her dark hair was matted down, and a smudge of birthing fluids tainted her pale flesh. The midwife had rushed to wipe off the baby after birth and deposited her in the nursery away from the child’s parents. Apenth, the God of Prophecy, Wisdom, and whatever else mortals had labeled him with this day and age, believed the little girl was perfect, except for one tiny thing.

Apenth had waited five hundred years for this child’s birth. Breath flowed from his nostrils and rustled her hair. He straightened as the wails from the other room clamored for her death not to be so. The small crib sat discarded in a corner. A doll, sewn by an expecting mother’s steady hand, peered at Apenth with coal-black eyes. Her parents didn’t know a god was here, watching, waiting for an opportunity to save their child. His hand hovered over the baby’s heart.

One touch would change everything.

“Stop, my son.” A wrinkled and liver-spotted hand seized his wrist.

He cursed his lack of foresight. Shouldn’t he have known Postera, the Goddess of Future and Foresight, would try to stop him? He was the God of Prophecy, after all! Her bony fingers gripped tighter with a strength he didn’t know she possessed. With a sigh, he lifted his head and focused upon her clear blue eyes, so like his own.

“Mother, she’s the one. I have to continue Amora’s prophecy.” He gently pried her aged fingers from his wrist.

“No, you cannot go against the Fates again. The gods are displeased.” Clothed in the threads of life, she ran her fingers along the thrumming red yarn—each strand symbolized one life and weaved together to create her dress. All threads emerged from a ruby gemstone belted over her navel. The closer to death a person was, the more the yarn would change from bright to dark red. She reached into her dress folds and revealed the severed darkening strand of this baby’s lifeline. “It is too late. Fate has forfeited her life, and her soul shall reside in Hupogaia’s realm.”

His heart sank. The detached thread swayed back and forth from her fingers. Was it too late to revive the child? His body curled closer to the baby girl. Her chance for life was slipping through his fingers with each passing grain of sand in an hourglass.

This girl had to be the sixth prophetess.

“You know what will happen if I don’t do this.” He jerked away from his mother. His eyes flicked between the blackened thread and the baby. If he didn’t save the child, who would stop Fate? His Phoenix Prophetesses were more than normal seers. They had the power to take his prophecies and change what was to come, despite the other gods and Fate’s claims he shouldn’t interfere. Her future was fading into the dark depths of the Underworld, and he wouldn’t allow her to be one of Hupogaia’s eternal children. He owed it to his deceased love, Amora, and the kingdom she had created and ruled.

“I know what may come. Who taught you prophecy? I did.” Postera exhaled through her nose. “You cannot keep meddling. Do you not see my wrinkles, my white hair? Kisa will curse you like she has me. Have you forgotten how Hupogaia protested against you last time in front of the High Council. They blinded your prophetess and said grave consequences will come if you save another one.”

He couldn’t forget the council’s words or how they’d cursed his fifth Phoenix Prophetess. But visions of the Kingdom of Amora in flames flashed through his mind. He could taste the ashes, like burnt charcoal, and hear her people’s screams. The prophecy of the kingdom’s destruction leaked sour bile into his mouth. The other gods, including Kisa, the Queen of the Gods, might be willing to turn their backs on their loyal people for Fate, but he wasn’t.

There was also this infant in front of him. She reminded him of his daughter. His mortal family resided in the Underworld, but he couldn’t let this child.

“Think of the consequences, my son.”

He had. They both knew the gods would find a way to curse him and this innocent child, but the price was worth saving the kingdom.

Ignoring his mother’s shrieks, Apenth leaned over the lifeless baby again. His lips pressed against her ashen forehead, so cold to the touch. Postera clawed at his arms, but he shoved away her hands. Nothing would stop him from completing Amora’s prophecy, protecting the city named after his love.

“You are mine, little one.” His hand pressed over her heart. Electric heat flowed from his glowing fingertips. They tingled, nearly burning his flesh, but his hand remained steady. Luminosity brightened around the child and him, further blocking out Postera’s pleas. The room filled with the blinding white light.

“No!” Postera screamed as the child’s life-thread ripped from his mother’s hand and joined the pulsing jewel on her belt. The piece sizzled, reattaching to the gemstone, and transformed to blood red.

The light imploded into the child. Her flesh glowed for a moment before the room’s shadows returned. A tiny strawberry-colored birthmark in the shape of a phoenix blossomed upon the flesh over her heart. The baby’s lungs filled with air, and a cry broke from her lips.

The Phoenix Prophetess was reborn. 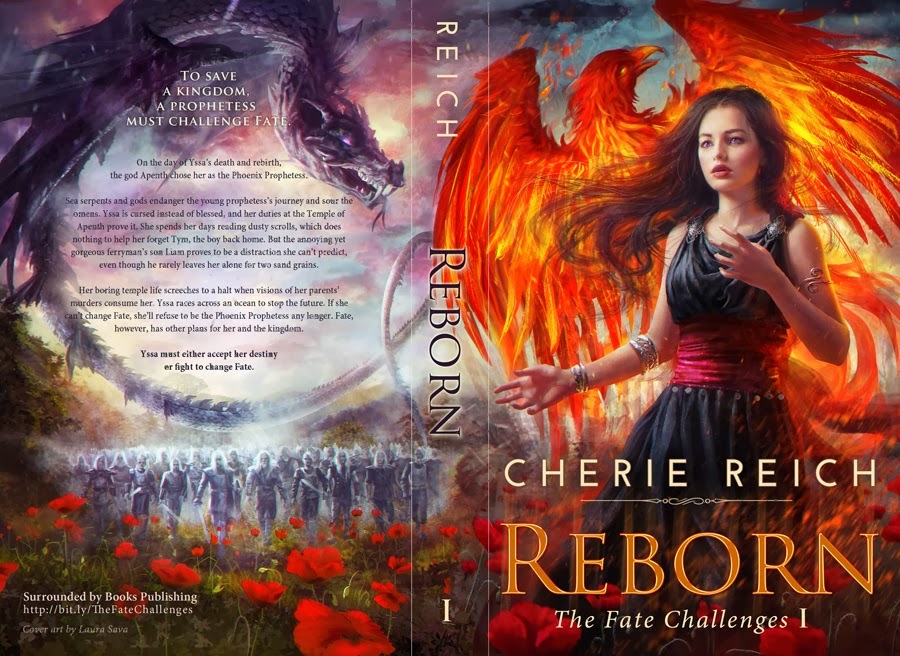 Congrats to Cherie on a beautiful cover!

Thank you so much for helping with my cover reveal, Aubrie. :D