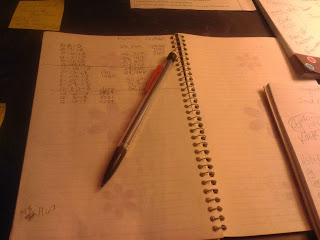 I had a very busy flute season this fall, so I've been behind on my writing. This month (With only 2 concerts left with the Monadnock Chorus) I'm picking up the pace. *Go, go, go me!* My word count goal for December is around 50k-70k, which is doable because I do have a lot of time off coming up after the 23rd.

The sequel to Pan's Conquest is due in January, so I'm focusing on that book next. It's tentatively titled "Ares's Temptation." It's going to feature a character from Pan's Conquest- Syrinx's clumsy yet brainy best friend, Kaye. She's going to fall in love with Ares, the God of War. Do to a curse, she gains Ares's powers, and for the first time in her life can do athletic things! It's going to be very funny.  I'm using the tropes: Handsome Devil, Ugly Duckling, and one more which I haven't figured out yet.

I'm also trying to finish Earth: Population 2. This book has dragged on since August, so I really need to wrap that up as well.

I'm still waiting on THE BIG CONTRACT, so I'll let you know once it is signed and ready to go.

Good luck with your writing!

Have a blast writing!