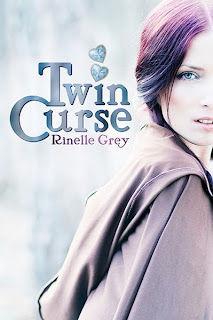 Born together, wed together…

The ancient law is a curse to Brianna, whose twin sister has fallen in love with a man Brianna can’t bring herself to marry. To avoid disappointing her family, she fakes her death and escapes Eryvale to hide in the dazzling city of Bymere…but the city doesn’t live up to its promise.

Lonely and homesick, Brianna regrets her decision until she meets Lyall, a handsome mage. Their instant bond grows deeper, and despite knowing she can never marry him, Brianna accepts Lyall’s offer to leave Bymere before travellers from her village discover she’s still alive. Journeying to the exciting Isla de Magi, Brianna makes plans for a new life and is shocked to find she possesses mage magic as well.

However, when a chilling dream warns of an impending threat to her village, Brianna must leave the Isle and rush home to help her sister. Soon Lyall follows, chasing after the same threat and longing to reunite with Brianna. But can the two work together to stop the danger? Or will Brianna be forced to choose between her love for Lyall and the safety and happiness of her sister?

Brianna threw another pitchfork full of spoilt hay into the wheelbarrow, then glanced over her shoulder. The stable courtyard was as empty as it had been last time she looked. When she realised what she was doing, she scowled. She’d offered to muck out the stables this morning to avoid seeing the young man from last night.
It would be far better for both of them if he headed off to whatever task had brought him to the city without them seeing each other again. There was no point pining over something that couldn’t be.
She forced herself to focus on the task at hand. Though the rain of the previous night had passed, its evidence was left behind in the form of wet, smelly hay. There was more than enough work to keep her busy for several hours.
After a while, the monotony of the task soothed her racing mind. She settled into a comfortable rhythm. Dig, lift, throw. Move onto the next stall, and repeat. Dig, lift, throw. She worked without pause.
Until a voice startled her. “I thought being a serving maid was beneath you—mucking out stables is even more so.”
His voice set her heart racing even before she glanced up and saw the man from last night, leaning against a pole watching her. He was dressed as neatly as the night before, a stark contrast to her muddy and smelly overalls. She turned back to dig one more forkful of hay, trying to give herself a few moments to calm the thumping of her heart before she turned to look at him again.
His dark hair was a little longer than the men in her village, and it arched in even curves on both sides of his forehead. He raised his right eyebrow slightly, his head tilted to one side. It didn’t help her composure any.
Leaning on the shovel, she focused on his words, not his looks. Feeling almost defensive, she said, “Nothing is beneath me. How can you possibly understand a job, or ask anyone to do it for you, if you have not done it yourself at least once?”
He looked taken aback. But after staring at her blankly for a few moments, a smile crinkled the corner of his mouth. “Wise words, beautiful Brianna. In that case, I think perhaps it is time I gave it a go then.”
That was not what she had meant. She couldn’t imagine him mucking out the stable in his spotless breaches and creaseless shirt.
But he was rolling up his sleeves.
“That isn’t what I meant. I…” Her voice trailed off as he came across and took the pitchfork from her. She was too surprised to stop him.
“You’ll have to give me some instruction though. I’ve never done this before.”
He shoved the fork into the muck, straight up, clearly proving her point. She felt a guilty sense of satisfaction as he struggled to force it through the thick hay. For a few moments, she watched him, too amused to offer any help. He wriggled the fork until the prongs went into the hay a little, then tried to lift it, but the prongs broke through the wet hay, and he ended up with only a few strands of hay still clinging to it.
He looked over at her. “Yes, I see exactly what you mean. I realised it was an unpleasant task, but obviously there is some skill to it that I lack. Are you going to teach me, or are you going to stand there and laugh?”

This information is very helpful
thank you very much because you have shared interesting things to all of us, greetings :)