Review: The Hobbit: The Desolation of Smaug 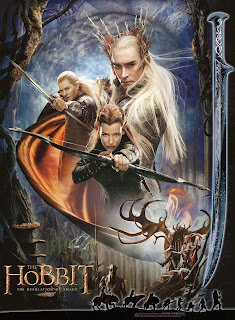 At this point in The Hobbit trilogy, I've come to realize it will not be The Lord of the Rings. The Hobbit just doesn't have the gravity or depth of the original movies. But, that doesn't stop me from enjoying these new installments for what they are. And it won't stop you, either if you put aside comparisons and enjoy the adventure and spectacle.

I love revisiting Tolkien's world even though much of it is rehashed from the originals. You have the spiders wrapping people up in cocoons, the Prancing Pony scene when scary people are staring across the tavern, the point at which Gandalf has to leave the group, and the entrance to the mysterious elf house. He even includes exact quotes from the originals- "It was but a dream," and "a sleepless malice," said by the Elf King- you can see where Legolas gets the phrase! Some of it is a little repetitive, but a lot of it is like revisiting an old friend.

I was surprised to admire Taurel's character so much. Played by Evangeline Lilly- Kate form Lost, I expected her to be the same frustrating, selfish character in Lost, but she's kinder, more noble, more graceful and more elegant. Adding her and a little romance made the story more interesting for me, even though the relationship between her and one of the dwarves seems rushed in my opinion. But it did create a moment of funny banter between her and Legolas when she comments on how the dwarf is "tall for a dwarf."

I was a little disappointed in the return of Legolas. He seems colder, meaner, and doesn't even crack a smile. He's lost the friendly, sarcastic wit of the originals. Maybe he doesn't develop it until later on when he's free of his oppressive father? 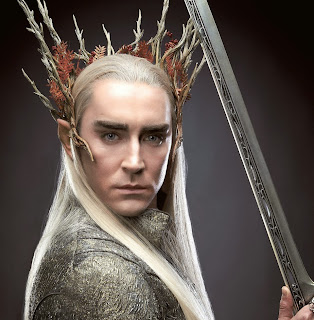 I liked how they explain why he's not fond of dragons, and how he hides that fact. He's a slippery character, and you're not sure if he's good or bad, or if Thorin Oakenshield can trust him. I hope he makes a return in the last installment.

Overall, the movie goes by at a quick pace that kept me interested throughout. Totally recommended.

I loved it. Yes, it's not LOTR. I find it rather odd that the LOTR only got three movies and the Hobbit gets three too. The Hobbit isn't nearly as serious as LOTR.

I loved this installment. Action and a dragon. I loved Bard...can't wait to see him fire his arrow at Smaug.

I think getting away from his father and probably meeting Aragon is what makes Legolas lighter.

The action guys had a lot of fun with this movie. There's a whole lots of suspension of belief for most of the scenes, but it was fun to watch.

I want to see it again....and I don't want to wait for the final part.

I'm hoping to see The Hobbit on Friday. And the book is not anywhere near as serious as The Lord of the Rings books, so it makes sense the movies wouldn't be either.

Hello there! This is my first comment here I truly enjoy reading through your posts. Can you suggest any other blogs/websites/forums that deal with the same subjects?