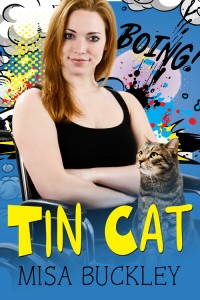 Where did you come up with the very original title, "Tin Cat?"
The title is a play on "tin dog", a reference to Doctor Who's K9.

Tin Cat sounds like the most original read I've ever heard of- android cats, cybernetic bounty hunters- wow! Where did you get the idea for it?
The ideas were drawn from several sources, including personal experience (of a comic book store, not a cybernetic bounty hunter!) and movie references from The Terminator to Breakfast at Tiffany's. My mind works in very mysterious ways, heh.

What is it like working with Champagne books?
Fabulous. My editor is always there if I need to bounce ideas about.

What's next for you as a writer?
I have three more single title releases this year - Bayne in May, Star Attraction in July and Archangel in August - as well as the first in a short story series released as part of an anthology.

Have you ever thought of trying a new genre?
I prefer the weird, so like writing those genres that let me play with the abnormal. SFR is definitely my favourite though.


What do you like to do when you're not writing?
I knit and bake, and am teaching myself violin and physics.

Where can we find you on the web?
I'm on Twitter as @MisaBuckley and my writing site is at misabuckley.com
About the author: 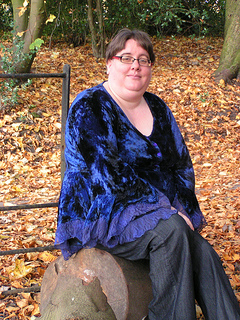 Born and raised in Manchester, UK, Misa Buckley grew up watching Doctor Who and Star Trek. She was fascinated by stars and space travel and avidly followed every Shuttle launch. But while TV fed her love of the future, books tapped into a fondness of fantasy, devouring books by Anne McCaffrey and David Eddings.
The extraordinary fascinated her, but growing up she’d rather be out horse-riding or practising her artwork than writing. It wasn’t until she’d married college sweetheart and had their first child that she discovered fanfiction, which offered her the chance to play in the universes she loved to watch.

After failing NaNoWriMo in 2007, Misa found another monthly challenge – JanNo – where she made some very good friends who encouraged her to break away from fanfic and write original. It took her a few years to take the step from writing to submitting, but her first novella was published in July 2011 (IRONHAVEN, Decadent Publishing).

A self-published novella followed almost a year later, after being aired weekly on her blog, with a second small-press contract released in July 2012 (ELEANOR’S HEART, Champagne Books). 2012 saw a further three contracts signed with Champagne, for releasing in 2013.

Though writing a much-needed haven from the crazy of raising five children and a Land Rover-obsessed husband, Misa also enjoys knitting soft toys and doll clothes, baking sweet stuff and cosplaying with the local Steampunk group. She has a motorbike that’s being loving restored and plans to take her test as soon as finances allow.