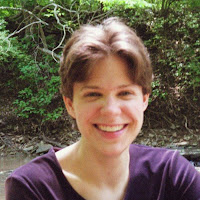 Lindsey and I have been blogger friends and critique partners for a long time! We also share a love for music, and we both do the professional musician thing as well. She's stopped by today to answer some of my questions about her new release, Flow.

1. Tell us about how your two careers (music and writing) go together/or don't go together. How do you make them work together?

I’ve always thought that music and writing require different kinds of energy. I don’t find the one interferes with the other – well, maybe if I’ve played for seven hours and my fingers are too sore to type, but other than that. Because the harp provides both melody and accompaniment, and because I play predominantly traditional music – where there isn’t a single set way to play tunes – I get to spend a lot of time creating arrangements. It’s a similar process to the way I write: I let the tune brew in my head, play around a bit, and when it’s ready, the arrangement comes out of my hands.

Bizarrely, I don’t compose new tunes. This has always bothered me as something I ought to be able to do. I can and have written lyrics to existing music. (In fact, the English lyrics for Winder Wie Ist on my CD, Rolling of the Stone, are my own composition … and when I finally found a translation for the original German, the theme is eerily similar.)

I don’t tend to directly include the harp in my writing – although there are some exceptions, such as Three Great Loyalties (recently printed in Niteblade). I feel as if I enjoy the technicalities of it too much and am concerned about lecturing a reader. However, the soul of music pervades my writing, and it makes frequent guest appearances.

Flow is a contemporary fantasy story – I call that distinct from urban fantasy because the term seems to be most commonly applied to a certain type of dark, first-person-centric story. Flow stems from two perspectives: teenaged Kit, bitter in the wake of the death of her mother and unable to control her budding powers; and Chailyn, a water-witch raised in the underwater Vale and only now sent to the surface for her first mission. The pair team up to uncover her mother’s killer and find more than they bargained for: predatory fairies, a rival organization to the water-witches known as the Borderwatch, and secrets buried in both their pasts. They also find Hadrian, a bizarre young man with hyper-accelerated perceptions who invites himself along on the journey.

I’ve written – and hope to see published – several other stories in this setting, some of which take the Borderwatch “side” of the matter.

The title “Flow” derives from the centrality and pervasiveness of water in the novel. Chailyn is a water-witch; the Vale has connections to Atlantis; fairies are the Unwashed, children of Eve who were never bathed in Eden; and even Kit has a connection to water in her past as a figure-skater. It can also be taken in the sense of “going with the flow” – something which is a struggle for the characters throughout.

3. Where can readers find you on the web?

(Shameless plug: two of my other stories can be found for purchase here:


These are both lengthy stories – which is what I trend to! I am a novelist at heart and squeezing myself into the short form has always been an exercise.)

4. What other genres have you tried to write?


I have always added a dash of magic (or occasionally, future science) to everything I write, so it all falls under the umbrella of speculative fiction. That said, I am particularly fascinated by the mystery genre and one of my long-term goals is to meld the two. The rules of fair play for mystery writers have had a huge influence on how I write, whether there is a mystery in the story or not. When applied to foreshadowing and twists, these rules make for strong build-up and avoid a reader feeling cheated. I have a novella sitting in my unsubmitted pile that’s best described as a fantasy mystery romance courtroom drama …


That Flow is contemporary fantasy is somewhat out of my usual vein. I tend to write secondary world fantasy – that is, fantasy set in a world other than our own. There are definite advantages to both. Extrapolating from mythology within our world has strong appeal for me. I also feel that it’s much easier to incorporate humor without reducing the story itself to the ridiculous – easy pop culture references and the like. Of course, a big disadvantage is how quickly everything becomes dated. Flow was originally written in (and is still set in) 2007, and you’ll notice the lack of texting, Twitter, Facebook … that practically makes it historical fiction!

And now for her gorgeous cover:

Kit Morgan has always known there’s more to the world than she sees – it’s hard not to, when her emotions cause objects to shift and glass to shatter. Then she encounters water-witch Chailyn, who reveals to her the existence of fairies, old and treacherous. Chailyn knows as little of surface life as Kit does of the supernatural – but both have to learn quickly, for Kit’s powers are surfacing.

Joined by Hadrian, whose hypersensitive perceptions have left him jaded, they rouse a hornet’s nest. They must also evade the Borderwatch – a supernatural agency that believes fairies are too dangerous to live and takes issue with Kit’s rogue abilities. Unable to take shelter with the water-witches, but with some unexpected allies, the three are forced to make a stand.

Buy from Amazon
Posted by Aubrie at 6:00 AM

Thanks for having me, Aubrie :-)

Very interesting interview. The cover is gorgeous and the story sounds intriguing. Thanks, Lindsey & Aubrie!