Interview with Katee Robert, author of Queen of Swords 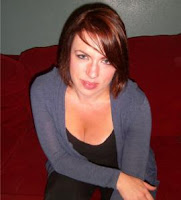 1. I'm so excited to welcome another sci fi romance author! Tell me: how is Queen of Swords like a typical Space Opera, and how is it different?

Queen of Swords is, at its heart, a character-driven story and Ophelia and Boone jump in and out of trouble in their pursuit of their goals. There's also an evil dictator to overthrow and an equally despicable hate-group who's trying to wipe out all evidence of Diviners in the universe.

And the Diviners are one of the things that make my books different. They are a species who use their tarot cards to commune with their goddess, the Lady. Since Ophelia (and her mother) are Diviners, the readings figure very heavily into the plot and introduce an aspect of paranormal into the sci fi world.

2. What are some of you favorite sci fi movies?

I absolutely am obsessed with Serenity. OBSESSED. River is one of my favorite characters of all time (and Mal, of course... *gusty sigh*). I also really love Aliens -- Ripley is so beautifully damaged and such a complete badass.

3. What do you think of the prequel to Alien, being released this spring called Promethius? (It stars one of our favorite actors: Michael Fassbender as the cyborg-Yay, I can't wait)!!!

You nailed it right on the head. Fassbender. That man can do no wrong as far as I'm concerned. I really, REALLY hope that it lives up to my expectations. And him as a cyborg? *bounces* Bishop was AWESOME in Aliens, so I'm hoping to re-up my cyborg love.

4. Is this your first foray into sci fi? If so, what have you written before?

The third book I wrote was sci fi, and it's actually the universe I used for Queen of Swords, though the characters are all different. The main heroine of that fiasco, Wrath, will actually make an appearance in Sanctify Book 3.

5. If you could be a sci fi character, who would you be? (cyborg, human, alien, space pirate, spaceship commander?)

I'd be a space pirate for sure! They have the coolest clothes (and a delicious tendency to ignore the universal laws at will).

6. Can you tell us a little bit about the other books in the series?

I have a novella out this month that's a prequel for Queen of Swords called The High Priestess. It's basically an origin story of the entire series-- How Ophelia's parents got together, why they hate Sanctify so much (beyond the obvious), and who the Big Bad is.

The next two books, Queen of Wands and Queen of Pentacles, tell the stories of Jenny and Sadie, respectively (both of whom are in the first book). Jenny is completely nuts and her book reflects that -- lots of running and fighting and shenanigans. Sadie is ice cold and on the path for vengeance, which is the driving force behind her book.

When the cards tell Ophelia Leoni she’s supposed to marry the Prince of Hansarda, the gunrunner grits her teeth and boards the starship that comes for her. It doesn’t matter if the ship’s captain is the gorgeous stranger whose bed she just spent a wild, drunken night in. As a Diviner, she’s painfully aware the cards don’t lie. Ever.

Boone O’Keirna knows Ophelia is trouble the second he sees the way she moves. Not about to let the deadly little hellact marry his sadistic half-brother, Boone pretends to be the Prince’s emissary and kidnaps Ophelia. Too bad they can’t be in the same room without him wanting to throw her out an airlock—or into bed.

Even as they fight each other—and their explosive attraction—Ophelia and Boone sense something is wrong. Too much is going their way. Soon, they realize while the cards may never lie, the truth is sometimes hidden between them…and the future king of Hansarda is not one to take defeat lying down.

Amazon
Barnes and Noble
Posted by Aubrie at 6:00 AM

Hi Aubrie,
You have been tagged over at my blog www.writersdolaundrytoo.blogspot.com. Hope you don't mind. :)

Great interview! Your book sounds fantastic - I can't wait to check it out. Have a great weekend! :)

Awesome interview! Congratulations Katee. Your story sounds fantastic. There's not enough sci-fi romance out there. I also have to give thumbs up to another Serenity fan!

Aubrie, I passed on the Lucky 7 meme to you today on my blog. :)

Great interview!!! I love the cover too!!! Wow!

Congratulations on the upcoming releases!

Hi Katee! I'm a huge Serenity fan too! I've seen the actress who plays River in a few other shows (Like The Sarah Conner Chronicles) but most recently last night on Gray's Anatomy. She's playing a nurse who's doing some hardcore flirting with another Doc's husband. Kinda smudged her gleam in my eyes. LOL I LOVE your cover. Your books sound awesome!! Putting it at the top of my TBR pile!!

What a great interview and I think your new series sounds incredble - big congrats!

Wonderful interview. Interesting concept using the tarot readings. Is there an excerpt available for your book?

Hi everyone! And thanks! :)

@Cher - There's an excerpt up over at GraveTells right now and I'm working at getting one up on my website. Here's the link:

Great interview... quite enjoyed it. Well done with your books.

Katee, thanks for the link.