I'm excited to welcome Bri Clark to my blog today on behalf of Bewitching Book Tours! Hello, Bri!!! My sister's name is Brianne, so it's nice to meet another Bri in the world!

Look at this gorgeous cover:

Lucien Lemione the clan leader of the feared and revered Eternals is faced with the ultimate betrayal. His second in command for two centuries has not only created the most grievous of offenses but also commissioned the creation of liquid silver. When poisoned by this toxin, an immortal suffers a fate much worse than death, frozen in an internal prison. After being wounded when found spying, he hides deep within the eerie woods that encircle the Triad Mountains. Desperate and in pain, he prays to an offended mother goddess for help. Her answer: a woman, but not just any woman. A witch.

After losing her entire coven at the hands of the Eternals, Aisleen is the last of her kind. She retreats from the world to Trinity Forest where she is giving the opportunity of a lifetime, or perhaps a test of principles. It’s there she discovers the man she heals is the Eternal that wiped out her people. Although she is bound as a healer, she could be creative in her revenge. Aisleen knows who and what Lucien his…but does not speak of it. There can be no future with Lucien for she can only be with a mortal man. Even if she wanted to be with him, can she forgive the man that caused the genocide of her people?

Lucien must act quickly for the survival of his clan is at stake. However, Aisleen’s ethereal beauty and emerald eyes keep pushing those thoughts far from his mind. Determined to find out what secret she hides, he prolongs his time with her. When his people need him most what will he choose…duty, desire, or will he make his own fate?

You can choose love but you can’t choose destiny.

Buy from the publisher

And now for an excerpt:

Lucien groaned. His head seemed to pound in a rhythm. He opened his eyes to survey his surroundings on instinct. He jumped up, alert. In the process, he knocked over a bowl of water and cursed. He was still in the little cottage. There was no sign of the woman. Bending over to clean up the mess he had made, he caught the fragrance of dried herbs. Sniffing the cloth, he found the source. Then, smelling his forearm, he realized he was the additional source.

A small mirror was positioned on a desk opposite the bed. He inspected himself. There was no trace of his shoulder wound. His skin had healed already. Nevertheless, the silver arrowhead had been within his body for too long. His insides would take longer to heal. It’s like recovering from a poisoning for a mortal. How long have I been asleep? In answer, his stomach ached from the lack of substance. Eternals didn’t have to eat much, but they still needed nourishment. The pounding rhythm started again and he cursed from the ache in his head.

That’s when he realized the rhythm was coming from outside the cottage. Lucien stood on stiff muscles. The smell of peony enticed him again and he followed, as obedient as ever. Walking through the low doorway, he knocked his head and swore again. Stumbling forward, the sun shone in his eyes, blinding him briefly as he went outside. When his vision cleared, he considered he might not be alive for the sight before him was nothing short of angelic.

A statuesque woman stretched her elegant body, turning her face to the sun’s rays. The ivory of her complexion was as soft as a cloud on the breeze. The beams colored her cheeks rose. Chestnut hair was pulled taut in a braid that ended at the small of her back. Her flowing white gown was almost see-through with the sunlight streaming behind it, revealing shapely feminine curves. He smiled in admiration. Lucien was an immortal, but at times, especially lately, he was more of a man than he had ever been. He continued to admire the view that temporarily distracted him from his aching body.

The angel stretched farther with something in her hands. His smile stretched, as well. Then, in one swift movement, she brought down an axe. Two pieces of wood fell over, adding to an already ample pile. The action was so unexpected, so unethereal, that Lucien swore and moved without thought. He stalked over to her and wrenched the axe from her hands. 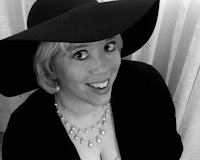 Bri Clark is a real example of redemption and renewal. Growing penniless in the South, Bri learned street smarts while caring for her brother in a broken home. She watched her mother work several jobs to care for their small family. Once her brother could fend for himself, Bri moved on to a series of bad choices including leaving school and living on her own.

Rebelliousness was a strong understatement to describe those formative years. As a teenager, her wakeup call came from a fight with brass knuckles and a judge that gave her a choice of shaping up or spending time in jail. She took that opportunity and found a way to moved up from the streets. She ended up co-owning an extremely successful construction business. She lived the high life until the real estate crash when she lost everything.
Posted by Aubrie at 6:00 AM

I love the sound of this one and definitely adding it to my TBR list. Thank you for sharing! :)

Hey Amy, thanks. I look forward to your review.

Aubrie thank you so much for having me here. My name is Briana. I love Brianne. All Bri's are great! LOL

If you love this cover the sequel's will knock you on your wanker. (Sorry been talking to some UK peeps) The Eternal Witch comes out at the end of April.

Nice cover. Like your writing style. This story sounds interesting.

I appreciate it. I hope you do enjoy The Familial Witch and it's sequel The Eternal Witch releasing in a few weeks.