I'm excited to share a new book by another Entangled Publishing Author!

A HELLSBANE BOOK - Book One - by Paige Cuccaro


Emma Jane Hellsbane just found out she’s not human—or, at least, not only human. She’s half angel, too, and now Heaven’s got a job for her: round up all the Fallen angels and their red-skinned, horned devil-demon minions and boot their butts back into the abyss. Only problem? The demons and their Fallen masters fight back…and they don’t fight fair.

Luckily for Emma, she can put a stop to the constant threat of having her head hacked off if she figures out which Fallen angel is her father—and then kill him before he kills her. Of course, in the meantime, she’ll have to avoid accidentally seducing her angelic mentor, help an old friend conquer his own Fallen sperm donor, and basically save the world from a cataclysmic divine smack down.

No one said being Heaven’s bounty hunter would be easy. But with a name like Hellsbane, Emma Jane was born for the job.

He snaked an arm around my waist, jerked me to him so our bodies were flush against each other. I gasped, my hands going to his chest on reflex.

A soft wind shifted through my hair, and the world around us blurred as if in motion. But our feet hadn’t moved. The overlook, the cars, the townhouses, the sky, everything raced past us.

Then it was gone. Darkness engulfed us, with only the distant stars twinkling in the vast emptiness. My hands leached around Eli’s neck, brought us cheek to cheek.

“You’re safe in my arms, Emma Jane. Always,” he said, his lips brushing my ear. A shudder traveled straight down to my center with the sweet sound of his words. The man had an orgasmic voice. What a waste.

His embrace loosened, and I leaned back enough to see his face. A soft glow lightened the shadows from behind me, just enough to cast a silvery glow over his expression. Time and space suddenly rushed in on me, and my brain spun like I’d been twirling around on my toes for an hour.

I let go of him with one hand, pressing it to my forehead to stop the spin and to keep my brain from coming out of my ears. “What was that?”

“Your mind is struggling to match speed with your body. May I help?”

I’d told him once never to use his power to give me false rapture, but it was like asking a fish not to swim. I nodded and he rested his hand over mine, the warmth of his skin heating through me. The nauseating twirling stopped.

“I hoped moving slower would help lessen the shock, but it seems the effect allowed your vision too much time to try and compensate,” he said.

“We moved at angelic speed?” I asked, guessing.

“No. I am able to travel at the speed of thought. We moved an increment slower.”

“Um, thanks.” I tried to see over his shoulder, to get my bearings, but I couldn’t push up on my toes. I moved the muscles, and nothing happened. I looked at my feet—there was nothing beneath us. No floor, no ground, no...anything, just more blackness and millions and millions of distant twinkly lights.

An icy bolt of panic shot up my spine and I clutched at Eli. My gut twisted and a scream caught in the back of my throat. Eli hugged me tight.

“Look behind you,” he said.

It took a few seconds of internal argument, but eventually my courage rallied, and I glanced over my shoulder. “Is that...”

Sheer awe loosened my grip. I shifted my feet to his—I had to stand on something—and turned, holding his hands to my hips to anchor me, my back to his chest.

The world looked exactly the way it does in all the pictures...but so much more. More beautiful, more breathtaking than any picture could capture.

There was a storm swirling over one of the oceans, and night was quickly approaching for half the world. A thick line of darkness crept over land and water as the planet spun. On the other side, brilliant light ate away the darkness at exactly the same pace.

“This can’t be real. How?” I asked, my brain fighting reason and everything I knew about space and time and reality.

His hands slipped over my belly, his embrace enveloping me. “In the arms of an angel, Emma Jane, all things are possible.”


And now about the author: 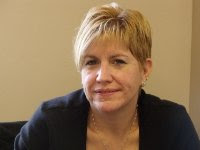 Paige Cuccaro lives in Ohio where she spends her days as a wife, mother, avid reader and obsessed writer. She loves writing everything from laugh-out-loud young adult stories to steamy hot romances with a twist of paranormal. Witches, demons, vampires, werewolves and angels, if they can fall in love, Paige will tell you their story.

That's a great excerpt - really makes me want to read the book!

I like the voice here. I'm looking this one up. Thanks, Aubrie. Good luck, Paige.