I'm excited to post an excerpt from another Entangled author's book. 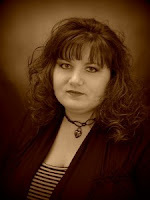 Rachel Firasek grew up in the south and despite the gentle pace, she harassed life at full steam. Her curiosity about mythology, human nature, and the chemical imbalance we call love led her to writing. Her stories began with macabre war poems and shifted to enchanted fairytales, before she settled on a blending of the two.

Today you’ll find her tucked on a small parcel of land, surrounded by bleating sheep and barking dogs, with her husband and children. She entertains them all with her wacky sense of humor or animated reenactments of bad 80’s dance moves.

She’s intrigued by anything unexplained and seeks the answers to this crazy thing we call life. You can find her where the heart twists the soul and lights the shadows… or at www.rachelfirasek.com.

And now for the excerpt:

A snow-sleet mix pelted the flapping windshield wipers and doused the inside of the cab with a bone-freezing chill. The driver ignored any discomfort and even cracked his window to belch through the seam, then took a drag off his cigarette.

Mon Dieu, she had to pick this taxi. Arabella Durand shifted away from the smoke that mixed with the irritating atmosphere. A more perfect mood couldn’t have been staged for her pending death.

The driver belched again, filling the car with his noxious stench. Much more of him and she’d find a way to hang herself now and hope her next soul found his or her own way to survive—to hell with Osiris and his orders. But she couldn’t. She was only allowed to die for him, the Egyptian god of the Underworld, and who knew what he would test her with if she failed? Probably another three hundred years of purgatory.

She had only one option: find her mark and die. It was a cruel trick of nature, and in all the years she’d been at it, she’d never understood. No one had been there to save her people—from her. No. The god obviously hadn’t thought them worthy of a second chance. And he sure as hell didn’t think she’d learned enough to find peace in death.

The cab rolled to a stop in front of the flickering Country Store sign that highlighted the cabbie twisting in the seat. Thank the Loa for answering her prayers to end the torturous ride. Long strands of hair fell against his face as he draped a beefy arm over the back of the passenger-seat headrest. He resembled Popeye with his bulging muscles and too-tight shirt—but instead of a pretty sailor tattoo, he had a dagger piercing a skull surrounded by snakes inked into his arm. The warning didn’t go unnoticed. Ari believed in the signs the deities chose to bless on her.

The driver grunted. “Lady, are you sure?”

Sure that she’d suffer? Yes.

Sure that she’d die? Yes.

Sure that what she was about to do mattered to someone else? Yes.

What an excerpt!!! Makes me want to read more!

Where can you buy this awesome book?
Here at Amazon

Here at Barnes and Noble

Thanks for sharing, Rachel!
Posted by Aubrie at 6:00 AM

Aubrie, Thanks for sharing my excerpt. This is a really special story to me. I hope your readers enjoy the excerpt!

This is a great excerpt! Reminds me I need to finish reading the first one too. Beautiful cover art too. Plus, I love the take on Egyptian mythology in this series.

Cherie, thank you so much. Aubrie sent me a Goodreads recommend on your book, and I've added it to my TBR! It looks awesome!

That's a great excerpt! And I love the Egyptian side to it. Egyptian mythology fascinates me. I'll definitely be adding this to my TBR list! (Sorry about the double comment.)

CD, Thanks!!! The Egyptian Mythos in this was fun to construct, but I tried not to let it dominate the story. :)

Love the feel of this book, Rachel. Really wonderful.

Kathryn, I almost considered keeping him on because of how gross he was. lol.

Thanks, Boone! And congrats on your new release!