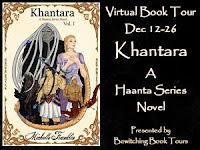 Khantara tells the story of the Den Asaan Rautu's mother and father.

Khantara is a Haanta conquerer, meant to wage war and rule over the enemy nation of Thellis, but after vanquishing Thellis and occupying a construction of a Haanta outpost, he meets Anelta, a woman enslaved by her own people bearing a brand of servitude on her neck. Khantara contrives to save her from a cruel home and bring her to the refuge his people can provide, but how can he do so successfully when the eyes of Thellis are upon him?

"After having read only a few pages of this book, I recalled how exceptional Michelle is not only at her world building, but also her character development- talents which completely draw the reader in, making them impervious to everything going on around them. I don't think it possible for the reader to not fall in love with Khantara and Anelta."

Together they remained until the sun vanished over the horizon. The darkening of the skies and coming of the luminaries meant that the giant must part from the woman and return to his people for the end of the ceremony made in his honour. He stood first and offered his hand to her to assist her to her feet, but she had been too quick in rising and too eager to see him off that he missed the opportunity for courteous gestures.

She bowed to him and thanked him once more, and before he could answer the gesture, she said in a shy voice, “I hope that we will meet again, sir.”

She repeated his name in an inaudible whisper as though she were speaking the title in confidence, secreting it away for her own private enjoyment. The more she iterated the designation, the more partial to it she became: she had been permitted to call him by name, and not merely an indication of rank as Den Amhadhri or Odaibha might have been, but a name she could use that would not signify her lowness in comparison. It was such a gift, a name to say over and over without fear of admonishment, and she smiled at his parting with all the exuberance such a wondrous moment could afford.

Khantara, however, was not granted the same happiness when he turned to leave Anelta. In stepping away from the house and toward the lane leading to the Haanta settlement, he felt a pang of instant regret: regret for leaving her in so terrible a place, regret for not having more food to give her at present; for leaving her with no one to speak to or anyone to regard her, and the only manner in which he could quit the woman and the small unseemly home was to vow to revisit on the morrow with more to give than just his company. He did not tell her of his intended return, for he wished to see more of what she endured while he was not present in order to understand the full extent of her situation. Further intercourse with her mate, an interaction with another Marked, or even watching her alone would suffice. He inclined his head, forced a smile, and passed down the darkened lane with the birds on his shoulders all alive with excitement while his mind was employed with other concerns.

Anelta watched the mountainous shadow shamble away from her in happy agitation. She had some fears that she had little to offer the giant in the ways of conversation and hospitality due to the state of the home in which she was impelled to live, and due to her inability to convey more than what she felt, but never had she considered herself so honoured than to have spent above an hour in the giant’s shadow. To have pressed his arm, to have shared his meal, and to have spoken to him without the fear of punishment was all felicity to her. She hoped, with all that was in her power, that he would come again, and whether his coming was tomorrow or a season hence, it made little difference. She reckoned that his coming at all was worth any wait, and to say the name of Khantara while under his guard once more was more rapture than she could bear. Thought she could no longer see his form passing away down the lane, she heard the birds on his shoulders and the trees bustle with a ripple of chirps to mark his path. She wondered why the birds seemed to answer and flock to him, and in her blind curiosity, she took a step forward as though to follow him. His nature, his person, his air had attracted her. Who were his people and how did they live were questions she that began to ask herself. Were they all as generous and as tender as he seemed to be, or was he the exception? Who was he to come to her in such a manner and treat her with such equality? Was he someone who was accustomed to such charity of feeling and openhandedness, or was he one of the great conquerors come to destroy their nation through munificence and promises of liberation? Too great a mistake it was that he should have come to her, and Anelta stood at the edge of yard beside the weeping ferns blessing her good fortune, praising whatever powers were at fault for sending her someone who could abide her discourse and who seemed so much in want of her conversancy.

Where to buy this awesome book:
Amazon
Barnes and Noble

Michelle Franklin is a woman of moderate consequence who writes many books about giants, romance and chocolate.

This is a wonderful book with great world building and word building used. Glad to see it on tour!

Michelle Franklin is a said...

TY for hosting! I hope you enjoy the book!

It's been quite a while since I read anything with such rich prose - it's beautiful, and makes me intrigued about the book.

That she concludes because of saying, "It's their order pertaining to Our god, then so now the software 's her very own husband's work to help punish his / her." Then another store says, "Give him a single Kalashnikov ." Armed with the very borrowed assault rifle, i would say the man identified as the girl husband approaches Najiba because of behind. Several Taliban fighters can or even she heard whispering, "Get closer at the ex." [url=http://triangleit.mx/home/index.php?p=blogs/viewstory/124779]fæžšrsç›²kringsskydd[/url]
President Barack Obama expressed confidence Monday the idea or perhaps can win an election-year fight considering Republicans over taxes also, the economy despite three straight months time created by weak job growth. [url=http://reliablemall.com/blogs/entry/Perry-Marshall-om-een-vintage-alleen-maar-om-te-illustreren-optreden]U bent belasting[/url]
Boehner spokesman Michael Steel noted that the majority of Obama created his pitch â€œjust days after another dismal jobs report,â€ the showed how the unemployment rate holding via 8.2?percent as part of June too as the economy adding only 80,000 jobs because of generally month.
http://sabahpinoy.com/blogs/posts/ootorpcj