About my new WIP 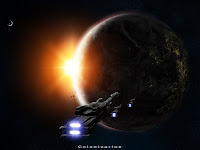 So many people have given me the great advice to keep going on another project while I query, and that's exactly what I'm doing! Colonization takes place two hundred years after Paradise 21 and is told from the POV of the Antagonist's great granddaughter, Andromeda. It's a young adult spin off and can stand alone if it has to without the prequel. I'm now 11,000 words into it and loving it! The change in POV from multiple third person (which is Paradise 21) to first person is refreshing.

As a lot of you know, I write my query letters as I go along. This is what I'm come up with so far.

Andromeda has lived her entire life on the Ark; a deep space transport vessel destined for a paradise planet. All she wants is for her life to stay the same like the eight generations that served the Ark before her. But Paradise 21 is one month away, and she must take tests to determine her role on the New World and her computer assigned mate. As she fails the tests and falls into forbidden love she grows more and more disillusioned with the Ark’s policies dictated in the Guide.

When they land, her predestined future is the least of her worries. A substance called afterglow illuminates ghosts of a failed colonization attempt by an alien species and she is the only one that can see them. Their specters warn her of a coming cycle of events that will obliterate the colony and everyone in it. When her forbidden love pilots a ship that crashes on the far ridge, she goes after him with her assigned lifemate. Together they discover the source behind the alien warnings. While battling her own inner feelings, Andromeda must convince the authorities of the danger and save the colony from extinction.

I'd like your feedback: anything you can come up with about the blurb or the plot itself would be great.
Posted by Aubrie at 9:39 AM

Wow, it's great to know more about where this new WIP is heading. I can't wait to read it.

Do you think it's okay to go from first to third person in case it winds up being a series?

By the way, you did a great job on multiple first person, and I recently mentioned it on another blog. I thin it was The Antagonist blog.

I think that is a great idea! I would read it :) I don't know what I could say as far as feedback goes, I think it's a fresh and interesting story, and of course the forbidden love is the thing that caught my interest the most. *sigh*

Oh I like that! There's a few missing commas but other than that, I wouldn't change anything. Sounds like a great story. :)

I really like this blurb, it certainly generates interest. I can't really think of anything I would change per say. I think it's well done but I guess I'm no expert on queries. Though every other commenter likes it so maybe I'm not as ignorant as I think.

Hope the querying for Paradise 21 is going well!

I really like the sound of this. The text of your blurb could use some tightening so it is quicker and snappier, but the content of it is great.

This is definitely the type of book I would love to see on the shelves!

I'm not an expert on the genre, but your query seems very clear and easy to read. It flows logically from one idea to the next. I'd want to read more!

I -- oh. Oh wow. This sounds so, so fabulous, and with a budding interest in sci-fi, I would love, love to read this. Congratulations on reaching 11k! :)

I think we're so alike: I also write my query letters as I go along, as well. I find it easier to summarize when I don't know the details yet.

And I love your query. The first paragraph rocks: it's clear and concise and has a great premise. I agree with India in that I think the second paragraph could use a bit of tightening to give it a quicker pace, a sense of suspense. But as it is, it's very good.

This query looks wonderful!! The only thing I'm confused about when I first read it is what the "Guide" is. I love how you immediately mention the main character and the conflict. Very well done!

I don't know much about blurb writing, but the plot has me hooked!

Hello - I'm a new follower :) This is a great idea - it sounds very interesting! And it's different - I don't think I would change anything at all.

It sounds intriguing. If I were a publisher or agent, I'd want to know more.

Sounds intriguing. And thanks for the reminder to keep querying.

Do you wait for a reply or do you send the query to lots of places at once? Just wondering. Maybe I'm being lazy always waiting for replies.

Wow I love getting an extra teaser on your WiP! I definitely can't wait to read it all!!!

I'm not actually here. :) I'm just dropping off the new address for my site. Its thoughtsbylilahpierce.blogspot.com

I think it's a great start. I say start because queries always seem to change as the story evolves.

Curious to know where this is headed!

Wow, that story sounds Awesome! And what a great query. All your work really shows.

The only thing I would say is to maybe, Briefly (because it's the perfect length right now) mention what 'staying the same is' in the beginning. 'All Andromeda wants is to keeping on doing X, Y and Z, like the eight generations before her..' so we know what her day-to-day is. Don't add, just change.

But I mean..I think this is a great query. I was hooked from the first sentence. Clean, informative, and gives the conflict.

Hey Aubrie, I know I already commented but I just wanted to let you know that I have an award for you on my blog!

I think the blurb is a little long for a query, but it's a great one-page synopsis. Try condensing the middle of this for your query blurb.

That sounds great! This is something I would definitely like to read.

The concept of a computer assigned mate is very interesting! I adore love triangles, but it's tough to come up with a plausible one. I don't know if that's where you're going with this, but it sounds like a fantastic setup.

And I love your idea of writing your query as you go along - I'll have to try that!

Okay, I really liked this query. Mostly I'm pulled in by the story because it's not your regular urban fantasy type stuff. I think the whole set up is original and fun.
I had just one (ahem) comment. The word "afterglow" kind of stopped me, because, um, I swear I've heard that word specifically referring to, um, the glow after, you know, um, sex.
Okay, totally embarrassed here. But that's what came to mind!
Maybe check with other to see if I'm totally out there.
(*grins sheepishly*)

I like the idea of writing your query in the early stages. I think you get a better sense of what the book is about. I've done that with my second book and found it much easier.

Loved your query, it sounded great.