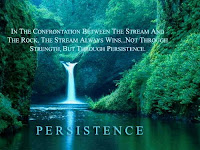 "In the confrontation between the stream and the rock, the stream always wins not from strength but from persistence."

I realized this week that I'm the least happy when I'm querying. I don't like soliciting people for anything. I'd be a terrible saleswoman. So I feel like I'm knocking on everyone's doors saying, "Listen to me, read my work." And it's hard to get turned down. This is the fourth book I'm querying, and I've had partial requests and full requests before on the other three, so it's hard not to think this one will end up the same way: close but no cigar. (Who wants a cigar, anyway?)

But I have to try. I got my third partial request this week.

Here are the stats:

And I'm up to 9,000 words in the Young Adult Spin off: Colonization.

Has anyone else been "close but no cigar?" How did you feel? Did it make you want to try again or give up?
Posted by Aubrie at 9:53 AM

Three partials though, that is awesome!

It's good you're working on another project, too. Thanks for updating stats...it's very helpful.

Don't you hate soliciting people? But your stats are great! Three partial - go!

Well, Aubrie, I don't know too much about getting published. The only thing I ever tried to publish was rejected so thoroughly that it now sits on a shelf...probably forever. But, you've done it. And you've grown. I just finished reading all the stories listed on the left (all the ones it would let me) and I have to say-you have too much talent and imagination to give up. Sea Storm's Castaway! Song of the Bard! Poseidon's Claim! And I'm ordering at least one book next week (payday)...I would be sad AND deprived...please keep trying. I know it's hard, but there's a reason for your talent...{{{hugs}}} to you...

I've been close but no cigar, too. I've had partials and fulls on stuff (even a revision request) but ultimately I am still agentless, and rewriting something huge before trying again.

I've only had two full requests from print publishers, none from agents. Only a couple of partial requests from agents. When I first started querying agents and publishers 10 years ago, it was tough. Now I don't think about it much. I get excited when I get a request, but I also get excited when I get a rejection. Someone actually wrote back! I hate the ones that only reply when interested.

I guess for me it's not such a big dream to be a professional fiction writer anymore. I would love it, but I would also love being a cat caretaker, which I am now! Seriously, you can hang in there and don't give up if the partials don't work out. Some authors write 10 books before grabbing an agent's attention. My attitude now is that - what else is there to do but keep going? I know the agents and publishers aren't rejecting me, but my presentation.

Don't take things personally and don't lose hope if your dream is to be a professional fiction writer. It's only a matter of time.

Remember that post I wrote on Friday that was all bubbles and sunshine?

Soon I'll be in querying hell, and someone will have to scrape me off the floor. Be lucky if reading my posts doesn't make you jump off a bridge!

Your stats look pretty good- someone told me you should get a request for every 15 queries you send out.

I've been miserable while querying- it's a nasty roller coaster ride. I finally made my peace with it just last night- what's meant to be is meant to be.

Querying is never easy. I received a lot of rejections for my fantasy YA, some partials and a full. I'm almost completely finished polishing it up for another query-go-round. Plus there's Hidden in Shadows that I am going to start sending out to agents in about a week. Don't lose faith and keep writing, that's all we can do.

First, the picture and quote for today are awesome.

I HATE selling myself too; I have no idea how I'm going to deal with querying. A small part of me is glad I don't have to do it yet.

Three partials is good. Even though it's hard you shouldn't give up. You are talented. It will happen for you one day.

Nice quote. Keep it up, Aubrie. You'll get there!

Hang in there Aubrie! You're still doing awesome! Three partials is a partial success!

I can relate though, I would make a terrible sales woman! I have faith in you!

I've only sent out 9.... and I"m having such serious doubts. I hate it. I put my letter up in QLH again... YAY ON THE THREE PARTIALS!

Persistence is definitely where it's at, even more so with the querying since that's where "rejection" comes in. Keep trying. Good luck. We learn a lot through the process of writing and querying; a lot about writing and a lot about ourselves.

You just keep pushing girl! It will happen. Concentrate on you WIP.

Think of the queries as mere paperwork. You've did the hard part. You've wrote the story and sent out queries. You have no control over the result from her. Place it in God's hands and hope for the best.

I've gotten close on two short stories. It made me want to work harder, because I fiqured if they were worth getting that close they are worth being published. Which to me means, I must have did something right. Right?

Congratulations on the partials! I'm sure more will be coming. *huggles*

I haven't been in the query trenches yet, so I haven't experienced such -- but I can sympathize. And soliciting: I'm the worst at it, really.

Yes, I've been there. I just got another request for a partial yesterday and I'm crossing my fingers. This agent actually READ the first chapter before requesting and I don't think that's every happened before. I just kind of revel in the feeling and tell myself it feel frickin fabulous, even if nothing comes of it later on down the road. I guess that's all we can do- revel in small triumphs until we catch the big one.

I agree with the others - three partials is awesome! Crossing fingers for you.

I have sent stories off before, and nothing major has happened. It did make me feel very despondant, and in some cases I put writing away for a while - 2 years or so - before going hell for leather on the next idea. I think to myself just keep going - some day my prince will come! :)

Congrats on the partial!

I did kind of come close with my last book, but I've shelved it and revising my WIP. I hope I'm as brave as you are. Querying makes my knees knock.

Yes! I've been there. And you're right. Who wants a cigar anyway? They might look nice, but they're smelly.

Hang in there. Persistence is key. Good luck with those partials!

I’m not a good with promoting myself either. That’s why almost none of my friends (or family) knows that I’m writing. I think you’re doing the best thing you can be doing query and write, query and write.

Yes, I've been close but no cigar, too. I know just how you feel. Gotta keep going, though. Never give up.

Congratulations with the three partials! That's awesome :) I know you'll get more!

I'm not even close to querrying, so I can't help there :)

But I can sympathize with not soliciting people, my stomach gets full of knots I hate it!

I'd so those are pretty good statistics. I haven't had any partials, but I should probably send out more. And I totally agree about trying to sell yourself. I hate when I read on an agent's blog, "Tell me why I should represent you." Ugh!

I've gone the same route as you before. What made it easier for me was when I started to work on a new project. By the time the last rejections on my full and partials had come in, I had already moved on. Also by then, I'd discovered (for the most part) where my weaknesses lay, and tried to work on them with my new wip. Fortunately I've had some great constructive feedback this time.

And now I have a new outline so that when I start querying later in the summer, I'll be busy with my new project.

Good luck, Aubrie. I enjoy hearing how things are going for you in queryland. :)

I'm also a lousy salesperson. But I'd be thrilled to have anyone request a partial. Sounds like you are on the right track!

Good luck with the partials - your stats are awesome! I think the best way to get through the difficult query stage is to be working on another project, just like you're doing. Thanks for keeping us updated!

Congrats on another request for a partial! That's great, Aubrie! :-)

Congrats on your three partials!! I think working on something else while you query is key. Good luck and keep us posted.

Three partials though, that is awesome!
Contextual Ad Network India

Yay partials!! Just focus on the positive and all will be well! :)