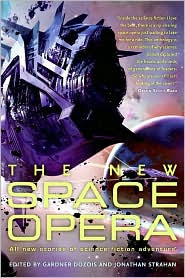 Okay, so I'm putting the finishing touches on my Space Opera for my submission to Samhain Publishing for their Space Opera Anthology and I've been thinking: what makes a good space opera? What is the definition of a space opera?

Wikipedia defines a Space Opera as a subgenre of speculative fiction or science fiction that emphasizes romantic, often melodramatic adventure, set mainly or entirely in space, generally involving conflict between opponents possessing powerful (and sometimes quite fanciful) technologies and abilities.

My favorite Space Opera: Star Wars, followed closely by Star Trek (The Next Generation ofcourse!) With Data being my favorite character.

I've tried to include all of the above in my Space Opera just to be safe.
Here is the blurb:

When Nebula plays the piano she experiences memories from a time before she was made. Her memories bring complex human feelings and a great desire to discover her origins. These mysteries are tied to one rebel fighter that is held captive aboard their ship. He is the long lost love of the woman from which she was made, and has taken it upon himself to avenge her death and rescue her sister from a fierce race enslaving the galaxy, the Gryphonites.

Nebula grapples with her identity and how much of her comes from the past. She is not the same woman that died, yet she is undeniably drawn to the same man. After she learns of her long lost sister, she decides to help him in his quest. Together they are taken prisoner of the Gryphonites and discover their newfound love while working together to defy the odds.

What do you think constitutes a great Space Opera?
How would you define the term?
Posted by Aubrie at 9:38 AM

I love space opera. Your story sounds good. I think your definition of space opera works. Ships, battles, romance, outer space -- all the things that make sci-fi so fun!