I played at a wedding at Robert Frost's House! 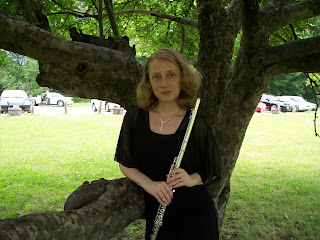 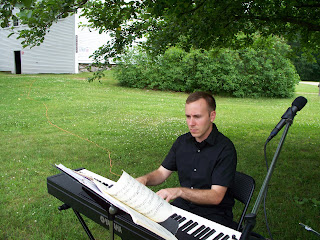 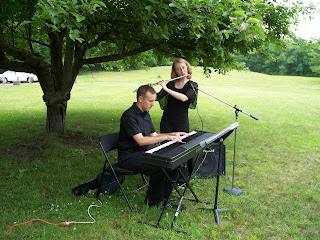 Yes, that's right, Robert Frost used to live right down the street from me in Derry, NH. Now his house is a public park, and people can go visit to walk in the meadow, take a hike on a trail, or even get married. What was especially cool about the ceremony was that one of the readers recited one of his poems.

A saturated meadow,
Sun-shaped and jewel-small,
A circle scarcely wider
Than the trees around were tall;
Where winds were quite excluded,
And the air was stifling sweet
With the breath of many flowers, --
A temple of the heat.

There we bowed us in the burning,
As the sun's right worship is,
To pick where none could miss them
A thousand orchises;
For though the grass was scattered,
yet every second spear
Seemed tipped with wings of color,
That tinged the atmosphere.

We raised a simple prayer
Before we left the spot,
That in the general mowing
That place might be forgot;
Or if not all so favored,
Obtain such grace of hours,
that none should mow the grass there
While so confused with flowers.

Here are the pictures! His farm is the white house in the back.
Posted by Aubrie at 9:31 PM