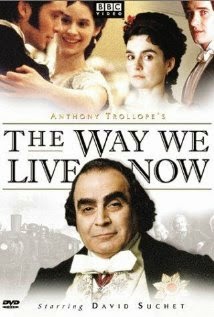 Everyone Gets Their Just Deserts

This is the oddest BBC mini-series I've seen yet. It has a lot of romance gone wrong and not much romance going right. But more so, it focuses on David Suchet's character, Mr. Melmotte- a French swindler with a pizzazz for great dinner parties. Perhaps the most interesting part is the twists and turns. I had no idea how it would turn out, and though everyone gets their just deserts, I can honestly say it was not the least bit predictable.

I was happy to see Mathew Macfayden in it (Mr. Darcy from Pride and Prejudice). But, I was disappointed to see him as such a loser. He drinks, plays cards badly, and professes love to girls for their money. He played the part well, but oh so I longed for Mr. Darcy to come back.

And Mr. Carson makes an appearance as an older Jewish man looking for a pretty young wife. I liked his character in this as well. The actor has such a great ability to show unexpected kindness. Too bad he's blinded by young beauty and the woman by a house in London.

I love watching Cillian Murphy in anything (Red Eye, 28 Days Later, Inception, Batman), and I loved how he got to play a sweet, albeit misguided young man in love. He has such beautiful large blue eyes that are so expressive.  I was frustrated with his character for letting that Southern Bell walk all over him, but he learns his lesson in the end.

Perhaps the character I loved the most was Marie Melmotte- the daughter of the swindler. She seemed silly and weak at first, but she has a few tricks up her sleeve. She grows and learns throughout this whole story, and makes the right decision in the end. And how could I blame her- being blinded by Mr. Darcy's professions of love. Any girl would. But she smartens up pretty quick. (And who knew she was moaning Myrtle in Harry Potter!)