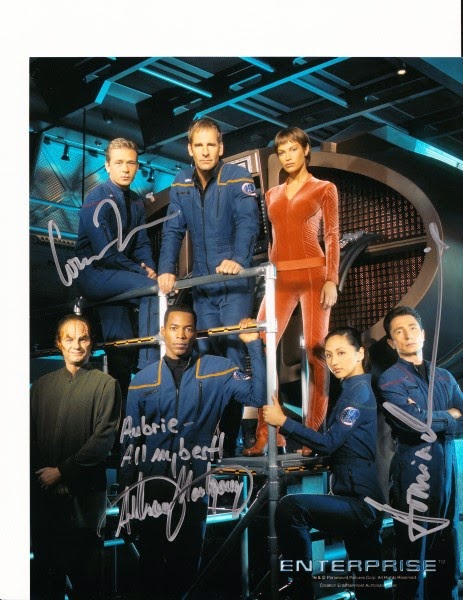 Last year I went to the Star Trek convention in Boston for the first time- for one day- and had a blast. I had so much fun, I'd wished I'd gone all out and stayed for the second day. This year I went for the full two days- even stayed at the Hilton overnight- and once again I had the time of my life. There were completely different guest stars, so the whole experience was different in a good way.

Last year they had guests from The Next Generation, and I got to meet and take pictures with the actors who played Data, Jordie, and Beverly Crusher. This was especially special for me, because I grew up watching this series. But, this year, I'd been watching Voyager and Enterprise, so it was soooo fitting I'd get to meet the guests for those series. 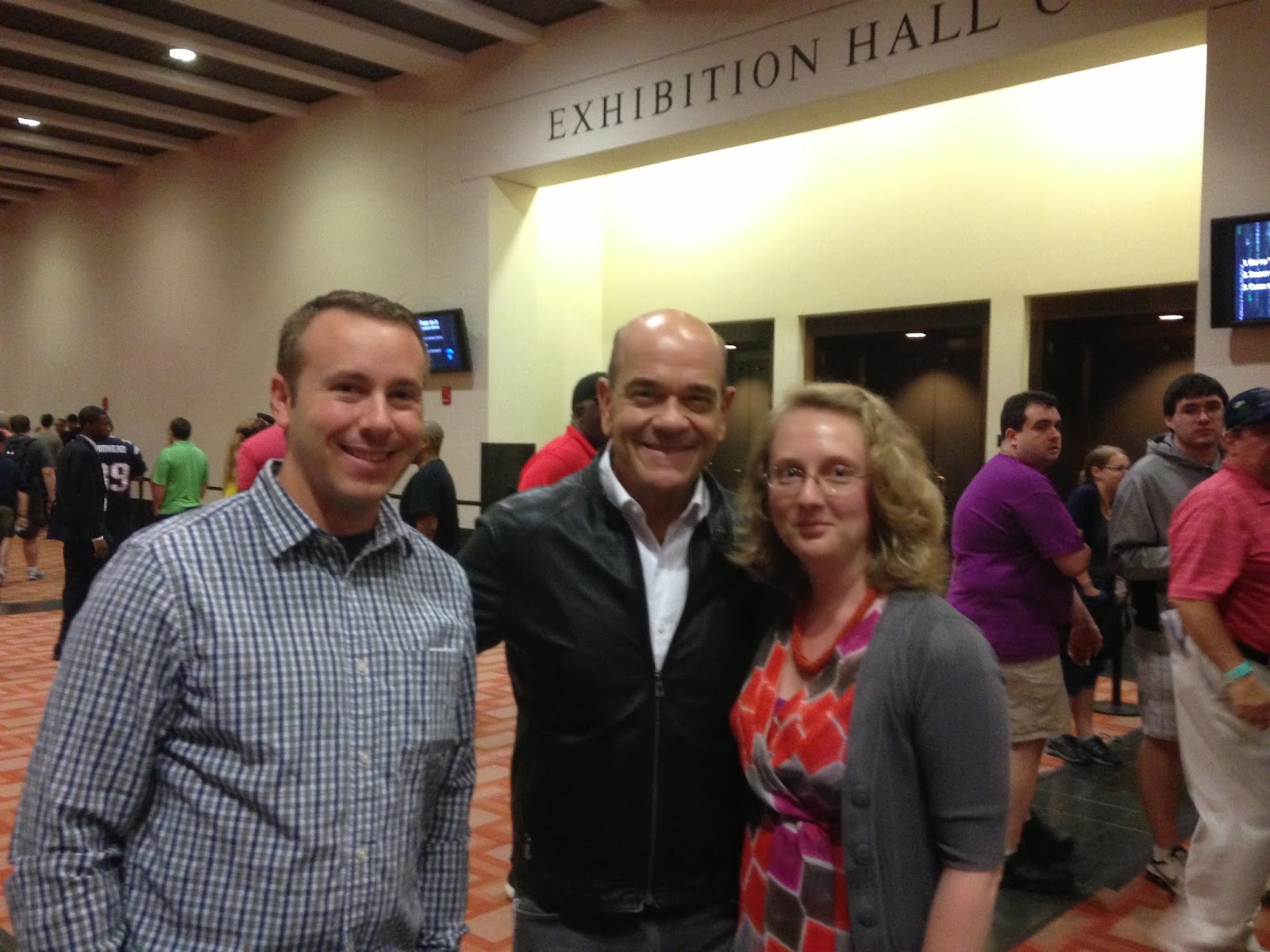 The first guest we met was Robert Picardo- AKA The Doctor- from Voyager. I told him my husband and I were both classical musicians and asked him if all of the opera he'd sang on the series was his real voice. He said that most of it was his real voice- except for a few times like when he went down to that alien planet and sang for his fans in that one episode- which I knew the exact episode he was referring to. This is very impressive considering he wasn't classically trained. I got to tell him he had a beautiful voice. And here he is in the pic above!!

Then, I met Connor Trineer  from Enterprise. I told him that I'd just watched that episode where T'Pol brings him to her home world and then tells him she's marrying that Vulcan guy. I told him that episode made me soooo angry! And he laughed and said, "What a tramp!" Then, he asked me if I knew what happened at the end and I told him I hadn't gotten through all of Season Four. He looked at me with surprise and said, "You don't know what happens in the in end???" I was like. "No." "Don't go to the talk," he said. Then he went into this "Should I tell her? should I not?" He didn't want to tell me because he was afraid to spoil it. But, my husband said, "It's better you tell her now- she should hear it from you." So Connor told me that his character dies!!! I was shocked. "That's awful," I said- so clever I am in these circumstances- NOT. After a few moments of getting over that, I told him, "Well, you do die a few times, don't you. Your clones dies..." But then he was like, "Yeah, but this time I really die." Then my husband says, "You look alive to me"- always the joker he is. Then, I finally had a comeback. I said, "They have to kill you off because you are the best." He looked over at the other crew member signing- Dominic Keaton- who signed mine later- and said, "Don't tell him that!"

Anyway, at least when I watch him die, I will have been forewarned by the actor himself- which is the coolest way to see a death scene I may say so myself.You can see Connor's autograph in the Enterprise pic above. He's the one on the left.

Then we watched Martok and Galron on stage as Klingons- which was very funny. They talked about how they'd like to see a bird of prey come down from the ceiling and how they should beam right off of it. Martok answered the people's questions very well- saying Soliders of the Empire was probably his favorite episode- which is why I should rewatch it. Anyway, here's our pic with Martok: 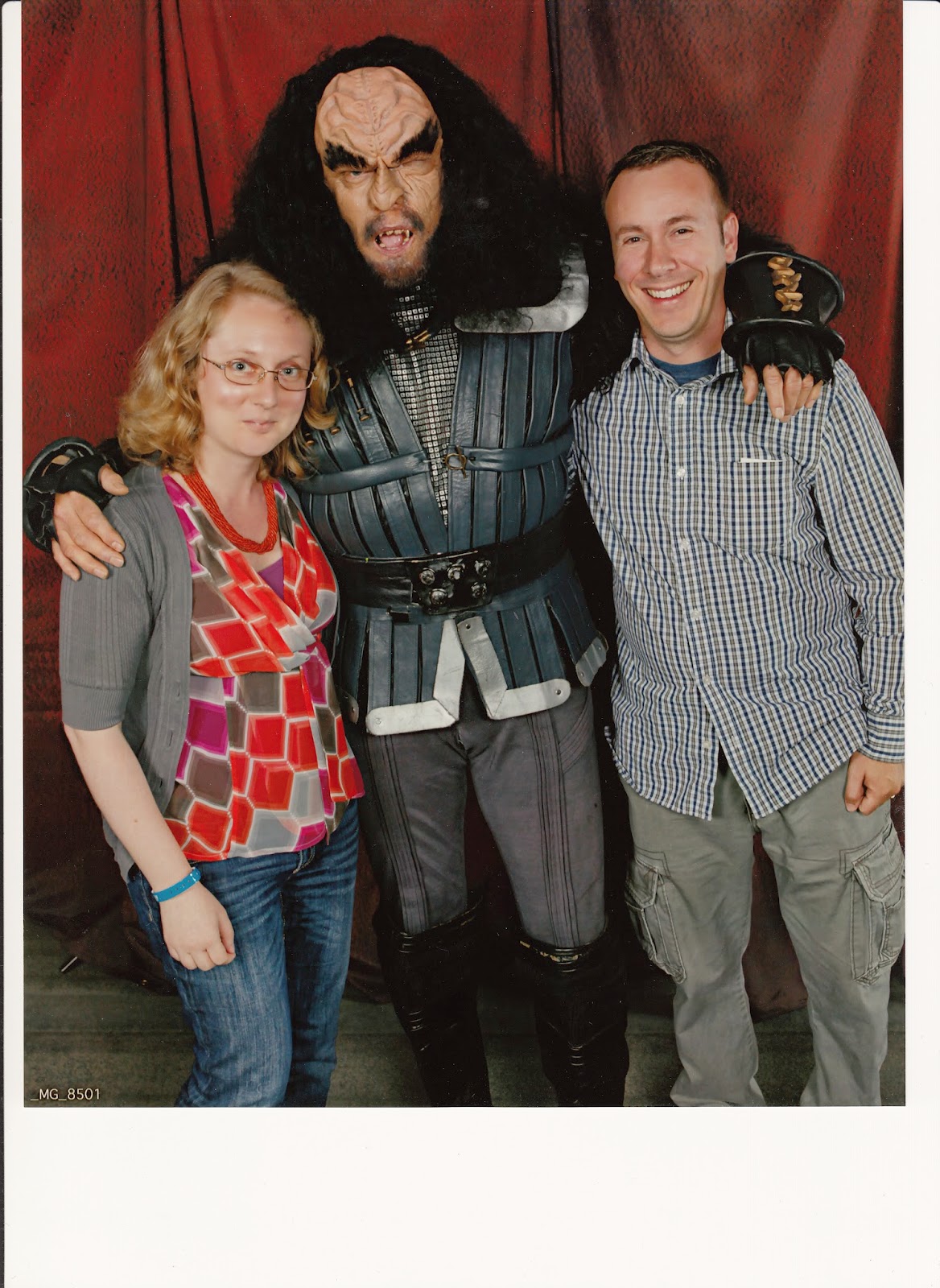 We also got Anthony Montgomery's signature- which you can see above in the middle of the Enterprise crew. He told us funny stories about how everyone was mistaking him for the other African American actor there- Tuvok from Voyager. He was very nice- shaking my hand and listening to where I was in the series. "So you haven't gotten to these episodes yet, have you?" He showed me some pics and explained how their characters go into the "mirror universe" later on and become evil versions of themselves. I told him I couldn't imagine his character being any other way, and he said, "Believe me, we are all human and we can all act evil!" It was great.

Anyway, on Sunday we watched Rom and Nog the Ferangis do a skit about how they beamed down to our century by accident and were trying to get back to their time. It was hilarious- very fun to watch. When I had my picture taken with Nog- he even remembered my name at the end and shook my hand. Very nice: 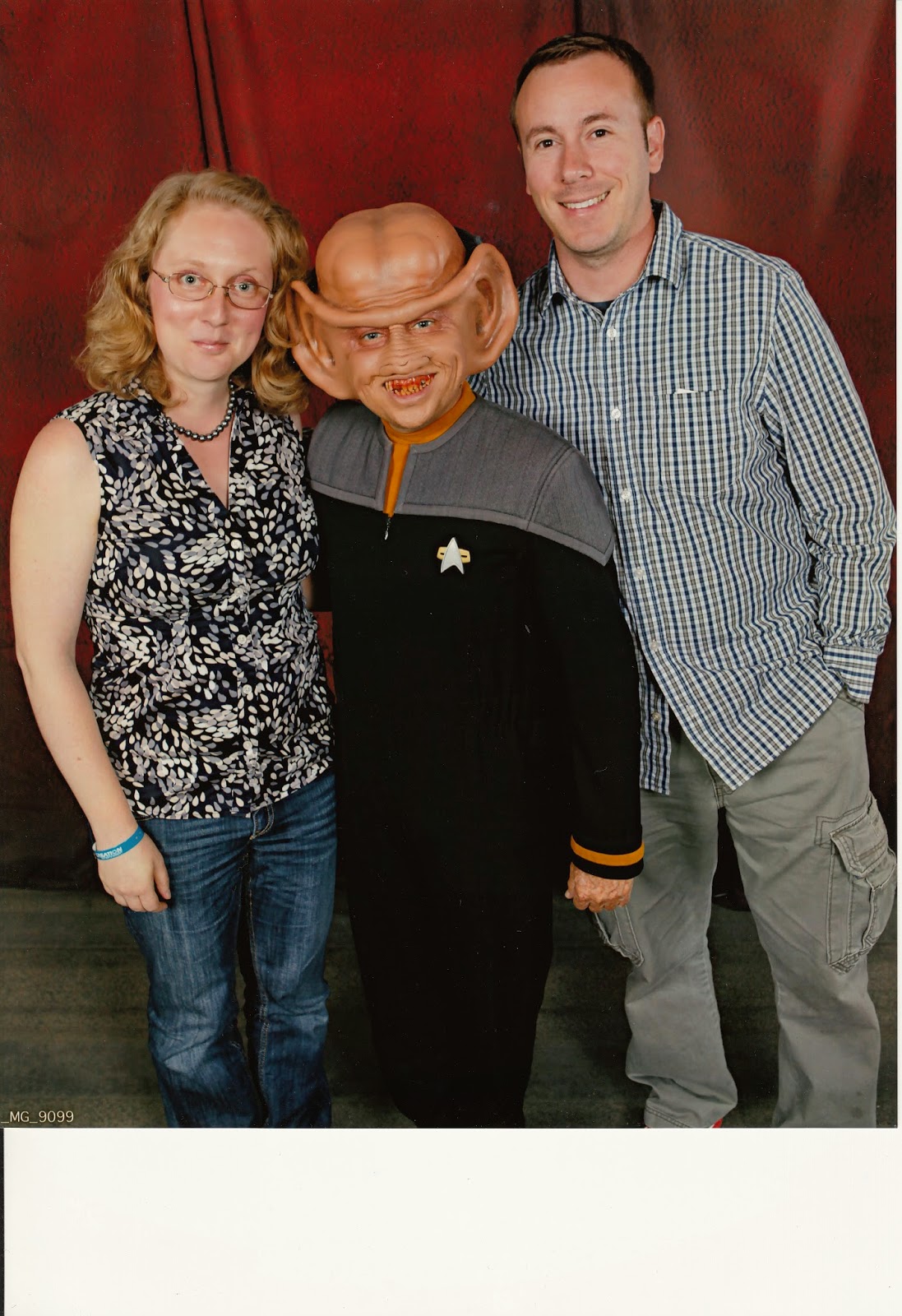 The final signature I got was Dominic Keaton's- which you can see on the bottom right side of the Enterprise crew. I told him I was a little afraid to get his signature because his character was so angry all the time, and he laughed. "You're not really like that in real life, are you?" I asked. "No. Not if you pay the money," he said. I think he was a little perturbed that the two people in front of me talked to him for forever and then didn't buy anything. Anyway- he was a little more edgy- JUST like how his character is. Hmmmmmmm.... I wonder. Still really cool to meet him, though.

Some of the best talks were from Tim Russ- who plays Tuvok in Voyager, The trio of men from Enterprise- Connor Trineer, Dominic Keating and Dr. Flox- can't remember his real name- Garret Wang and Robert Picardo's duo- and the skit with the Ferangis. Someone asked Tim Russ about his Spaceball line- all of four words- and he said that he's just as famous for those four words as he is for all seven years of Star Trek combined. He said it was just a job he took for the money, and he filmed for one day in the dessert and that helmet was so hot!! And now, people remember him for that one little moment of fame. Very neat insight. Robert Picardo told us he was second in line to get Al Bundy's job in that sitcom- but he's glad they didn't pick him because his version of Al Bundy was more acerbic and bitter. Very interesting. Dr Flox said one of his favorite episodes was the one where they clone Trip. He said they writers may have gone a little too far in the later seasons with making the Captain throw one man in the airlock- and I agree. I especially don't like the episode where the Captain has to steal the warp drive from the innocent ship. That just doesn't sit right with me, and it's not in the spirit of Star Trek. Oh well. Dr. Flox said that after 9/11 the writers made the show more edgy, and I hadn't thought about the relevance before today. I'd just started watching them this year, so I never went back and figured out the ones pre 9/11 verses post 9/11 and how that changed the tone of Star Trek. Very interesting.

Anyway, lots of great memories and stories to tell! I could go on forever, but I'll leave you for now with the Vulcan saying, "Live Long and Prosper." You can see the other conventions right here on Creation Entertainment's website. I know you want to go, so what are you waiting for!!