In honor of Star Wars Day today, I'm going to talk about my favorite three moments from all the Star Wars films. This was a hard choice to make, because there are so many fabulous moments. These three stick out in my memory as the best.

1. The Han and Leia kiss scene in Jabba's Palace after she frees him from the carbonite:

Han is temporarily blinded and touches Leia's face. He feels her helmet and pulls his hand away. "Who are you?"

Leia takes off her helmet and says, "Someone who loves you."

And then they kiss.  Too bad they are interrupted by Jabba's evil laughter.

Why do I like it so much? They are finally reunited after Darth Vadar freezes him and takes him away from Lando's cloud city. I can't imagine waiting until the third movie came out to see them together again. It must have been hard for all those fans back then! I could hardly wait just to pop in the next VHS tape when I was growing up.

2. Luke standing on Tatooine looking at the dual suns and considering his destiny. A french horn solo plays his theme in the background. LOVE this scene! 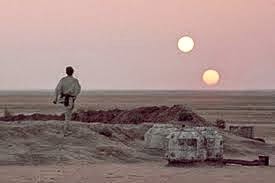 Why do I like it so much? Luke undergoes such a great character arc throughout these movies. He starts as a whiny boy who doesn't want to stay at home while his friends explore the galaxy, and ends up as a Jedi master. This scene is one of the first times he has to grow up and think about the choices he makes. My sister loved this scene so much, she had me take a picture of the television set when we were growing up. I can still remember her saying, "Take the picture now!"

3. The Jedi Ghosts in the Ewok Village at the end 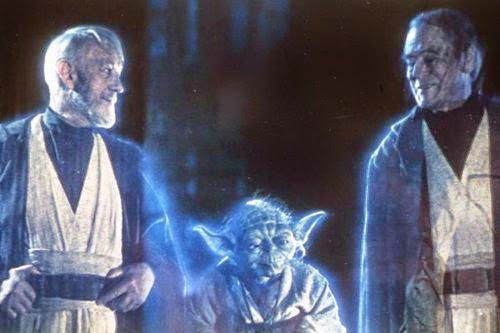 This scene gives me so much closure for the entire series. I finally got to see Anakin at peace the way he was before he turned to the dark side. I like the added touch of putting the new Anakin- played by  Hayden Christensen- at the end as well. Either way, it shows a silver lining to all the darkness. I'm glad they can all be friends again.

So what are your favorite Star Wars moments? Please share in the comments!

The famous scene in Empire Strikes Back where Yoda says "Do. Or do not. There is no try." And then after Luke fails to bring up the X-wing, Yoda does it.

Failure is all in our minds and even the smallest people can do amazing things. You just have to want it and go for it.

Ooh, good ones! There are so many great scenes to choose from in these movies. :)