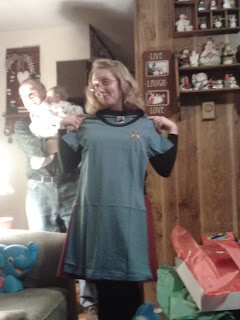 I was going to write two different posts, but I decided to combine them. Christmas and New Year's are so close, why not? So, here is my favorite Christmas present this year, given to me by my brother, Austin, and his wife, Danielle. It is my very own Star Trek outfit to wear to the convention this year! I love it. Blue is my favorite color, although a medical position is far from where I'd be if I actually graduated from Star Fleet Academy. I'd probably, in all reality, play in the band. 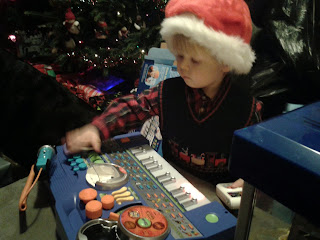 Here is my adorable nephew, playing with the DJ set I talked about in my last post. He loved it! He's even figured out how to record himself and play it back (at three years old!). At this point, all he records is babble and shouts. 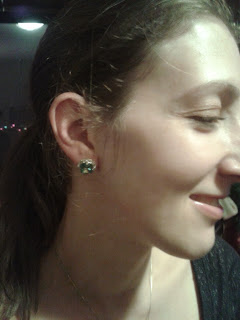 My sister loved the emerald/peridot earrings made with the birthstones of both her children. They look beautiful on her. She can't wear them right now because her 6 month old pulls at her ears, but in time, I'm hoping she'll get a chance.

Suffice to say, Christmas went beautifully, and I'm looking forward to starting a new year in 2014. Writing wise, I came in at 226,942- which is way below my goal of 365,000 and even less than last year (316,000). But, I had a lot of success with my flute career- joining the NH Philharmonic and a bunch of faculty recitals, so writing took a back seat for awhile.

In 2013 I only had two new releases: Playing the Maestro and Reconnaissance. Both of them had moderate sales. I'm hoping to really up the sales this year with a whole bunch of new releases:

1. Alliance, Book 3 of my Paradise Reclaimed trilogy, comes out January 31 from Inkspell Publishing- cover reveal on Jan 5. So, if you haven't read book 1 and book 2 yet, you'd better get moving!

2. Love on Love Ness comes out in February from Astrea Press. Get ready to read about the Loch Ness monster!

3. Pan's conquest comes out sometime this winter from Entangled Publishing's Covet line. This is about the story of Pan and Syrinx continued in contemporary times.

4. Duets with Michelangelo comes out in March from Harper Impulse. This is the sequel to Playing the Maestro told from the MC's bff's perspective.

5. Diva's Handyman comes out in June from Harper Impulse.

6. Minstrel's Serenade comes out from Lyrical Press in August. Be ready for dragons, swords, and quests!

7. Frozen comes out sometime in the fall from Spencer Hill Press.

So, if all goes well, 2014 should be a better release year and writing year for me. I'm continuing to play with the NH Philharmonic, but I don't think I'll have to devote quite as much time to flute. I'm really hoping to reach my 365 word goal. As for resolutions, I want to write and practice flute everyday, working steadily on building both careers. Personally, I want to continue to help my sister with her two kids and make sure I spend time with all my siblings and see my parents a couple times a month.

Hi Aubrie! Great goals and congrats on the new gig and all the books coming out! Hope 2014 is the best ever and I love your Star Trek dress!

It sounds like you have a busy year ahead of you!

Also, I love your Star Trek outfit! I've never been to a convention, but I'd love to go someday. :) Have fun!

Hi Aubrie! I hope you enjoyed the holidays! I was wondering if you would be willing to answer my question about your blog! I'm Heather and my email is Lifesabanquet1(at)gmail(dot)com :-)

Happy New Year and good luck on all those goals.

Wow! That's a lot this year. You're going to be busy! :) That's an awesome gift you got, and your nephew is adorable. It's amazing how smart kids are these days.