Happy Birthday to Me! The Pitfalls and Advantages of Turning 35

So today is the big day. 35. To tell you the truth, out of all my 30's birthdays, this one takes the cake! (Pun intended)  This year had a lot of changes, and I finally have the big things I've been searching for for the last ten years of my life.

The first half of the year crawled by on a plateau. I had two releases that didn't gain much traction, and only one orchestra concert in sight- a smaller gig that only lasted three days. But, in the last few months, a lot of things have happened for the good. So, I'm happy to say if someone was to go back to younger Aubrie and tell her she'd be in this place at 35, she would have been jumping for joy.

So the pitfalls first....

1. Yes, I have wrinkles. You can see them around my eyes, especially when I laugh and squint. Oh well, bound to happen sometime.

2. My metabolism has slowed down to a halt. I used to be able to eat a whole bag of cookies and put on my jeans no problem. Now, I don't even eat cookies anymore and I still have to jog and do pilates just to fit in jeans that were bigger than before. The day I had to swap out all my pants for a bigger size was a sad day indeed. But, it's part of growing up. Can't wear teenybopper jeans forever.

3. Young people look like babies to me. The first time I watched Lord of the Rings ten years ago, I was very interested in Legolas. Now, when I watch it, he looks like my younger brother, and I find myself thinking Aragorn doesn't look half bad. Hmmmmmm....that makes me feel pretty old.

But, the birthday I felt the oldest was last year when I realized I was the same age as Bill Murray in the Ghostbusters movies. When I watched those as a kid, I thought- look at those goofy old guys. I've never going to be as old as them. And here I am today.

Those disadvantages aren't that bad.

Now the exciting things I've been waiting for:

1. A contract with a BIG SIX publisher! This one is so new, I can't even announce it yet because I'm waiting on the final signature, but it is going to happen, and soon. I can't wait to tell you about it. I've been waiting for this ever since I started writing about 7-8 years ago. For a while, I thought it would never happen.

2. My principal flute orchestra seat! This has been ten years in the making. The last time I played principal flute consistently with an orchestra was back in 2004, and even then I was like a long term sub. Then, I lost the seat to someone else. For years I pieced together orchestra gigs as a sub, and now I finally have a home to call my own. This took many years of hard work, a few crazy stressful auditions, and a whole lotta waiting.

3. A New Flute! I've been playing on the same Brannen flute for the last twenty years of my life. Sure, it's a great flute, but I chose it when I was a teenager, and I wasn't sure what I'd be wanting twenty years down the line. Because of my orchestra seat, my husband and I scraped together the money to get me a deeper sounding flute with a 10k gold headjoint.  Sure, it's as expensive as a car, but I use it every day of my life, and it makes me sound so good. Isn't it pretty? 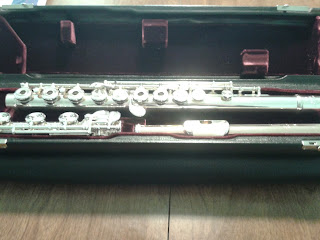 In conclusion, yes I'm older, slower, and wrinklier, but I have so much to be thankful for. Finally, my hard work is paying off. All I had to do was keep at it year and after and never stop believing in myself.

Wow! What an awesome next year's coming up for you - and that with such a ripe old age ;)
Happy Birthday!!!
I had to laugh at the cookie thing. Horrid that one can't splurge like that anymore without paying dearly. I miss it too *sigh*

That flute is gorgeous! And I think the pros outweigh the cons a lot. You can take Aragorn. I still want Legolas. ;)

So envious of the new flute. Congrats. And can't wait for the NY news.

I'm sorry, I've already claimed both Legolas and Aragorn. They're so pretty with the light and dark hair next to each other. ;)

Happy Birthday! What exciting and wonderful things have come your way! I'm one year older than you, so I completely understand everything you said about getting older. Enjoy all of your successes!

Happy Birthday!!! I totally understand the 'watching the stars grow up' or not - in the case of old movies. :)Congrats on everything. Just think, there's so much more to come. Best of wishes to you.

Oh dear, can we please not talk about the wrinkles? LOL!

It's wonderful to hear that all of your hard work is paying off. Congrats to you! Can't wait to hear the rest of your exciting news.

I'll say the pros far outweigh the cons! Good for you!