My Experience at the Boston Book Festival 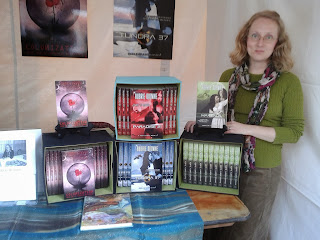 I found out about the Boston Book Festival last fall while searching through the internet for places to bring my books. Just the name Boston makes me excited, because growing up an hour away in New Hampshire, I always thought that was where the action was. If I was going to gain more readers and sell books, then Boston was the place!

At that point, I'd missed the deadline to sign up for a booth. So, I waited all the way until next spring, checking the website every so often for updates. I figured if I got a few other authors to share the booth and split the cost we could do it together.

Since the Boston Book Festival doesn't allow self published authors, I asked my fellow Entangled friends to share the booth with me. At first, I had two other authors interested. Eventually, one dropped out, leaving me and my author friend, Sarah Gilman. (Whose paranormal romances Deep in Crimson and Out in Blue are awesome- pick them up and read them sometime!) 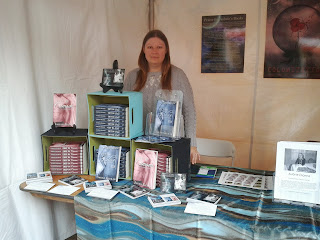 It's about five hundred dollars for a booth, so we split the fee. It worked out really nicely, because we could each set up our books at a separate end of the booth. I already had all of the supplies from my Castleberry Fairs signing last year. 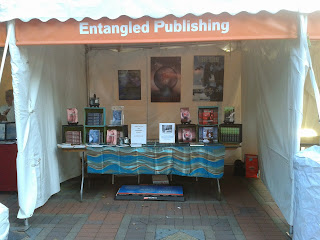 The neatest part was the location: right out in the middle of Copley square, where the Prudential Building is. You can see the Boston buildings in the back of the next picture: 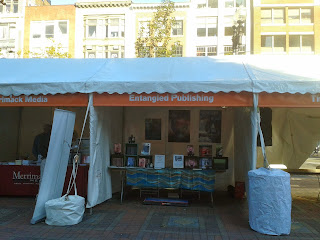 The Boston Book Festival claimed it gets 25k visitors in one day, and boy were they right. At times, it was hard to even walk by our booth there was so many people gathering. I wasn't sure how many of them were people just on the go in Boston, or people attending the festival. They had some big names doing lectures, and I'm sure that brought a lot of people there. In any case, at least I got a lot of exposure.

October in New England is a little chilly, and all they had was porta potties- which I loathe. You just feel dirty for the rest of the day until you can truly wash your hands. But, after settling in, I walked across the street to a bagel house, bought a nice hot cup of tea, and used their beautiful restrooms with real toilets.

The grand total books that I sold is 16- not bad for a days' work. It did not recap the price of the booth, so for those of you out there wanting to make money on something like this, you should consider something else. But, I'm happy with the results. The whole point is to get readership, and now there are 16 more people out there reading my books that had no idea I existed just a day before. I also passed out a lot of flyers. Sarah had gorgeous postcards of her new paranormal romance novella, and she gave out a bunch of those.

Will I do it again? I'm not sure. Getting down there, unloading the books, then finding the parking garage was VERY stressful. I went down a one way street- the wrong way- and at one point, Sarah had to move a police barricade so we could get back in to load up our books. But, I'm proud to say I did it once. Someday when I'm 89 years old, sitting in my recliner and wearing fuzzy pink slippers, I can talk about how I did exciting things like this and feel like I lived a full life.

Sounds like a really great experience!! So nice to see beautiful you and your fabulous books! Hope you are well!

That's great you found some new readers! That does help make it worth it, and your booth was so nicely set up! :)

Wow, that sounds like an exciting experience. 16 new readers, but that can expand as they spread the read about the amazing writer named Aubrie. :) So, down the road, the fee may just pay off. Congrats on the event.

Exposure is hue and you sold books. That's a win in my book. :) Love how the booth was set up!