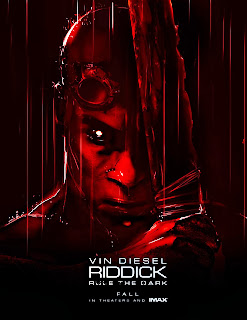 True to its roots, this next installment will satisfy the old fans while bringing in new ones.


So, I'm a big fan of the previous three Riddick movies: Pitch Black and the Chronicles of Riddick. I loved the first movie set on the desert planet where a ship crashes, and the survivors have to rely on Riddick- a prisoner and a criminal- to save them. It had shady characters, twists and turns, and enough noble actions to make all the dark parts worth it. The monsters were awesome- Pterodactyl like birds that could only survive in the dark.

The second movie was more of a space opera- with a race of Necromongers destroying planets. Riddick is the only hope of defeating them based on an old prophecy. He "keeps what he kills" and becomes the Necromonger King. Pure awesomeness.

Here is a pic of him as Necromonger King: 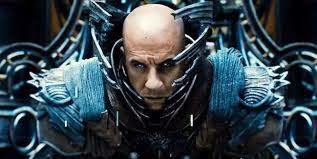 Gotta love that helmet- or is it a cape? Anyway, if I could have even a fraction of his bad boy toughness, it would be enough to last me for the rest of my life.

Now, I was afraid this new movie would disappoint. How can you top such perfection? And maybe it didn't top it, but "Riddick" did add to the legacy with enough ties to the originals to satisfy. True to his character, Riddick, whom we learn has a real name: Richard Riddick- doesn't want to take the oath that comes with being Necromonger king. He makes some enemies, and they leave him for dead on another barren world much like the first movie. (This ties into the last movie perfectly- with references to the Necromongers and even a cameo appearance by Karl Urban from movie #2.)

Riddick soon learns how to survive on this wasteland because he's just way too cool to die. He defeats the monsters, develops a tolerance to their venom, and raises one of the monster leopard dogs as his own.(Which is reminiscent of movie #2 when he tames the tiger monsters in the prison.)

But, just like the first barren planet of Movie #1, this one has its own wave of destruction. In the first movie, the creatures came with the dark. Now, they come with the dark and the rain. How cool is that?

So, Riddick finds a mercenary station, and calls in the mercs to come and get him, providing his only ticket off the planet before the creature onslaught begins. Two merc ships show up, both wanting Riddick for different reasons. The first ship wants him for the bounty on his head, while the second ship is manned by a character related to movie #1- a great tie in!

The best part- for me anyway- was seeing Katee Sackhoff from Battlestar Gallatica. She's part of the team for ship #2. 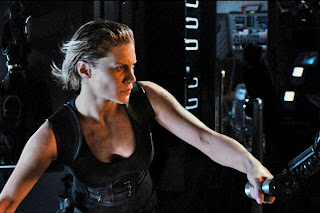 I love strong female characters, and boy does she kick butt in this. Go, Katee go! One reviewer said none of the characters have redeeming qualities, but I beg to differ. I really liked Katee's character. She showed empathy toward Riddick, and even a little attraction as well. We all know that Riddick is still in love with the late Kiera from Movie #2, so there's not much of a romance here, but one of the final scenes is enough for me. Also, another character twists from what you expect him to, just like the characters in movie #1, which makes him redeemable in my opinion.

In summary, if you enjoyed the previous two Riddick movies, you will definitely like this one. It is rated R, so there are some naked scenes and bad language. I wouldn't take the kids, but I'd go with an adult friend.