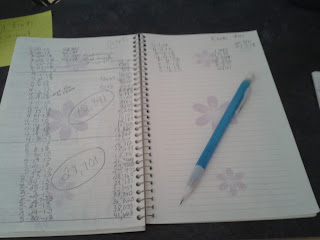 As much as I want to keep my Star Trek post up at the head of my blog forever, I must move on with my life. *sigh*

Last month was a good writing month for me. I clocked in at 27,701 words, which is only 3k under my goal for each month. I finished my Pan and Syrinx Greek mythology contemporary romance, and I submitted it to Entangled Publishing's Covet line. They've already read the first three chapters and synopsis and are very interested! For this one I'm keeping my fingers crossed!

This month I'm working on a new YA contemporary sci fi about the end of the world! Tentatively titled Earth: Population 2, it's about a girl who wakes up one morning and everyone is gone. Everyone except for the one person she'd least expect. It's going well. I'm on the third chapter and the writing is coming easily.

As for submissions, that's where the crickets come in. I haven't heard much of anything on all of my submissions. Out in submission la la land: My Loch Ness story, my epic fantasy, the sequel to Playing the Maestro, and now my Pan and Syrinx story.

TBR on my agent's list is the third book of the Paradise Reclaimed trilogy: Alliance.

And that's it. Not much of an update, I have to say. Hopefully, I'll have better news soon. What's going on with you?
Posted by Aubrie at 9:22 AM

I hope you hear some good news soon from your submissions. The new novel you're writing sounds awesome! :)

You've been busy! Hope you hear more than crickets soon.

Good luck with your submissions! I'm very interested in your Pan and Syrinx story too. :)

Good luck on your submissions. I'm sure waiting is the hardest part!