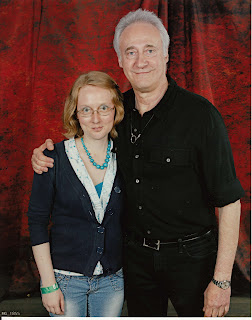 Me with Brent Spiner (Data) I totally freaked out and now he thinks I'm a crazy person.


On word to describe the convention: PHENOMENAL. I had the time of my life. OMG it was so special. Several times I just had to calm myself down from all of the fun overload and surreal "wow" moments.

So, we first get there, get out ticket wrist bands and the schedule of events, and start walking to the signature area where the stars are going to be signing pictures.

I'm with my brother, his girlfriend- both are dressed in Star Trek attire, and my sister. 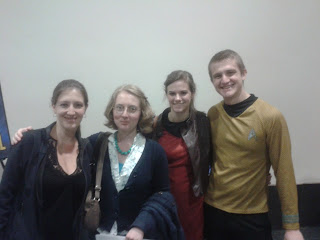 We're walking through the crowd, and this guy with a hat and sunglasses bumps into my sister, like really hard. I give him a dirty look, because I'm protective of my sister- she just had a baby a month a go, and how dare he bump into her. She apologizes, and he says really loud, "No. I'm sorry. You go ahead. You go." And it's so nice that we both think he's being condescending and totally thinks we're idiots.

So, we walk away and I make an offhand comment like, "Weirdos at Star Trek." then, we watch him take his seat at the signature tables. My sister bumped into Levar Burton- Jordie. Her face has never turned so red.For the next hour, we hassle her about bumping into Jordie!

The next thing we do is go into the vendors area to get pictures for the stars to sign. There are tables set out with TONS of star Trek merchandise. 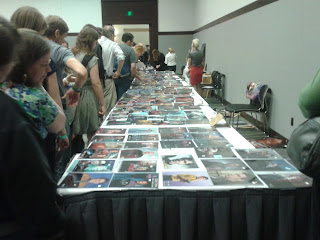 I buy a communicator pin, and my sister buys a shot glass. We debate buying a Star Trek hat for my dad, but he doesn't really like Star Trek- and I don't want him to get picked on at work- so we pass.

Some of the pictures are already signed. Like a signed picture of Jean Luc Picard goes for $80. They also have giant framed pictures with all their signatures on them. But, where am I going to hang that in my house, right? We buy a picture of Spock- not signed- for my mom because her birthday party is tomorrow, and I get one of the crew of the Enterprise for Brent Spiner (Data) to sign. I contemplated just getting a picture of him, but I thought that would be a bit too stalkerish and I want to play it cool, right?

So, we buy our pictures and look at the other tables. The writer of the Hugo award winning episode "The Inner Light" is selling Ressikan flutes and talking with people at his table. My first reaction is wow- he's just sitting there with no bodyguards or anything. So, we approach his table and I tell him I teach flute. He talks about his flutes, and actually plays the melody on one of his flutes for us! I buy the model that plays and a really cool necklace of the probe from the episode. Then, I figure- now's the time, I probably won't ever have another chance. so, I start asking him questions- writer questions- about the episode. (How cool is this??? Talking to a writer of a Star Trek episode???)

First I tell him the truth- how the episode made me think for days, how it kept brewing in my mind. And he seems to like that. Then, I ask my slew of questions: Were the people real or just real in his mind? Who built the probe exactly? He keeps trying to save the planet, but they keep waving away his suggestions. Is it because the planet is already gone?

And I get some great answers. The best one is to my last question: "No," he says. "It's not because the planet is already gone. It's because they wanted him to work for the community and his part in it." What a great answer. I'd never thought of that. He said it's not like a video that replays. It's more of an interactive model that reacts to his own actions.

That was probably the most special part of the whole convention for me- a sci fi writer talking to another sci fi writer about the ideas in Star Trek. WOW.

Then, I have my embarrassing FREAK OUT crazy pants moment.  We get in the line to have Brent Spiner sign my picture. It's about a twenty minute line, which makes the apprehension build up. I'm only meeting one the the most important influences in my childhood and one of my biggest crushes in high school. I start hyperventilating, my throat constricts. I'm not sure I'll be able to talk at all. 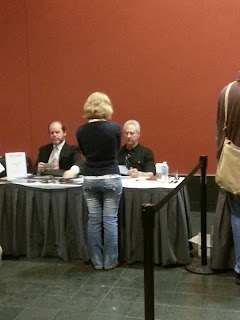 The first thing that pops out of my mouth is "I had the biggest crush on Data growing up." He says, "That's a good choice." I tell him my name- thank god I remembered it and how to spell it. Then, I start freaking out. I'm just blabbering, "OMG I'm so nervous, my hands are shaking..." And he tells me not to be nervous and signs my picture. My sister comes it with her picture and is SO cool- like we're just talking to a person off the street, making me look even crazier. She says, "You can sign it anywhere because you're our favorite and we're not getting any other signatures on it." He seems to like that, because he signs our pictures twice. :)

But, OMG I just flew off the rocker there. I could have had a more meaningful conversation- like telling him how much I enjoy his web series, or telling him about my favorite Data moment- but no- I had to freak out and now he'll think of me as a crazy idiot for all eternity. Oh well.

Next up is the costume parade. I was so impressed by people's dedication. There were a few Guinans, a Q, a lot of science officers, some Deep Space Nine costumes, and a really cool blue guy. The winner was an older man that looked almost exactly like Scotty from the original series. My sister overheard that he does it professionally- which I think is a little like cheating by entering this competition- but that's okay. His costume wasn't as intricate as let's say the woman Klingon, but he was the sentimental favorite.

Here's some of the contestants on stage: 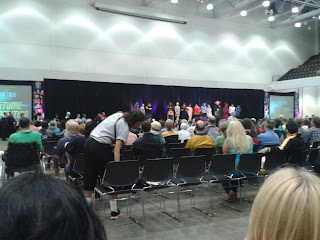 And then, we got pictures with the other crew members: 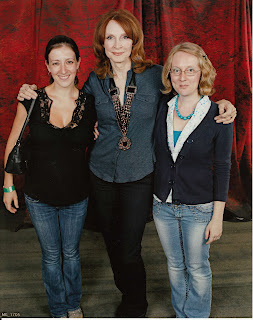 Gates Mcfadden looked amazing! She's so beautiful in person and was very friendly- and very tall. In her appearance on stage she talked about the time she had to have her appendix out, and how the doctor called her "Dr. Crusher" and started talking to her about everything involved in the procedure. She was like, "I'm not a real doctor- just do it!" 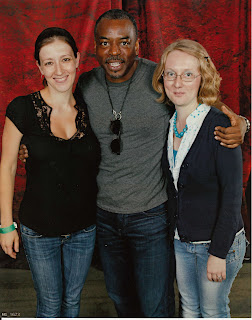 Levar Burton was so energetic and loveable. We just went "Hey!" and opened our arms to him and he hugged us both! His eyes are beautiful in real life, they pop right out of his face. So expressive. I saw him interviewed once and he said the challenge for him was not using his eyes as Jordie, because as a actor he relied on them so much to express what he was thinking.

Actually, the lines weren't so bad. Some of them were long, like the line to take a picture with Brent Spiner: 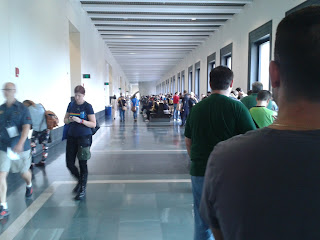 But, they moved very fast. One thing to consider: taking pictures is at the same time as some of the panels and presentations. Originally, I wanted to take pictures with everyone, but then I saw how much it conflicted with the schedule, so I had to pick and choose which ones to go to.

The reunion performance in the evening was great. William Shatner introduced the cast of TNG, and they all talked about working together. They said they were a feisty bunch and had a lot of funny stories. They teased Patrick Stewart a lot because he was so serious and down to business. They also talked about how some of the episodes in the first season were a little out of control, but how they really couldn't speak up too much because it was their first season on the show. All very, very interesting!

I had the time of my life yesterday, and I'll remember it always. I totally recommend going to one of these. It was expensive, but worth every penny!

Looks like it was simply awesome. Glad you had so much fun - and I bet a lot of people buckle under the excitement. I know I would ;)

Fascinating. Love the pics! Glad you had a great time. It really does sound like a fun thing to do. :)

What did I tell you?!

So glad you had a good time!

I went to the same one and also had a lot of fun. My first convention and it didn't let me down. Although I thought the vendor rooms were a big disappointment. I guess I expected a lot more merch.

As a huge fan of Denise Crosby, she made it extra special. She signed a huge banner of Tasha Yar that we won in one of the auctions (which turned out to have a huge black ink like flaw on her forehead, but being that is looked like an oil drip, she made it all better by refering to Armus and his evil ways on the banner as well as her sig.)
She then remembered us when we had the "Ladies of Star Trek" photo op, calling us "her guys."
She even said my name and wanted to know where we were sitting, while talking about the banner, on stage! Being an introvert, it freaked me out, but it also made it very, VERY special.

I'm glad you had a great time too!

I loved reading your descriptions of the convention. I've never been to one, but it sounds like a lot of fun! I'm sure I'd have no idea what to say if I met an actor from a show I loved too!

Hehehe! Sounds like a fabulous time. I think I'd freak a little for Data too.