Special Guest: Dixie Lee Brown, author of All or Nothing 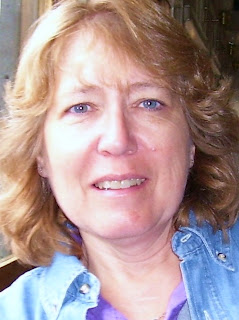 Dixie started writing romantic suspense nearly twenty years ago. Then life took a few unexpected turns, and the writing career was put on hold in favor of starting a new life and a new job.

One’s passion is not easily forgotten, however. Two years ago, Dixie started writing again—a YA novel—but, before she could finish, another idea pushed to the forefront and wouldn’t go away until a full-fledged novel was completed.

That idea became ALL OR NOTHING, first book in the Trust No One series. All or Nothing placed third in the 2011 TARA Contest (Tampa Area Romance Authors) in the romantic suspense category.

Dixie now lives in sunny Central Oregon with two small dogs and a cat for company while she writes the third book of the Trust No One series. When she’s not writing, she enjoys reading, movies and trips to the beach.

And now for her book! 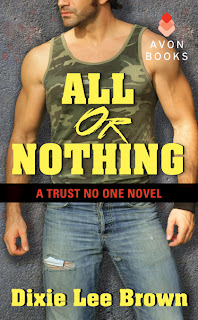 Somebody wants Cara Sinclair dead.  Joe Reynolds is determined to keep her alive, but that's not all he wants.

Divorcing one of the west coast's most notorious crime bosses is probably not the best idea Cara ever had.  If not for her half brother, Brian, convincing her abusive ex-husband to leave her alone, she'd have been dead six months ago.

Now Joe, a man she meets right before two gunmen try to kill them both, tells her it's not her ex-husband who's out to get her.  Joe just saved her life and she wants to trust him, but who else could possibly want her dead?  And why does she get the feeling Joe didn't appear in her life just by chance?
Joe's undercover investigation into Cara's family business reveals Sinclair Arms Distributing is selling illegal automatic weapons.  The investigation goes bad and one of Joe's operatives dies, but not before telling Joe that Cara's life is in danger.

Joe promises to keep her safe, but he also intends to use her to find the evidence he needs against her brother.  All he has to do is convince her to trust him.
Falling in love with her isn't part of the plan.

Excerpt – All or Nothing

“What is it about you’re not leaving you don’t understand?” Joe struggled to control his temper.
“Well, I see Tyler sold me out. It’s good to know who I can trust.” Tears welled in her eyes, and she swiped at them cursorily. She spun away from him and went to stand in front of the balcony doors, her body trembling.

“Ty works for me, Cara. Did you think he wouldn’t tell me?”

She continued to stare out the window. Joe sighed in exasperation and, that quickly, his anger was gone, diffused by her tears and her determination. Against all good sense, he wanted to take her in his arms and somehow make everything right. He stepped up beside her until their shoulders touched. She flinched away from him, moving closer to the glass. Damn it to hell! This just kept getting worse. Somehow he had to get through to this woman. Not an easy task with her mad and hurt and convinced she didn’t need his help.

“Where were you planning to go?”

“Where exactly is home right now?”

Her short, terse answers were getting them nowhere. He took a deep breath and resisted the urge to shake her. “Well, let’s think about this. You could go back to your apartment in Portland and wait for Sinclair’s hired guns to show up. That’s if Dennelli doesn’t get to you first. God knows what he’d do. You might be able to leave the country, but there’s no real guarantee one or both of them wouldn’t find you anyway.
Or…you could stay here until the threat is over.” Stepping in front of her, he lifted her chin so she was forced to look at him. “It’s not so bad here, if you’ll give it a chance. I promise I’ll take you home as soon as this is over.”

“When will it be over? When everyone’s dead?”

Her eyes were about to rim over with tears, and he wasn’t surprised when she jerked away and turned her back.

A moment passed as she brushed angrily at her cheeks, before she turned back, her arms crossed. When she met his gaze, he smiled, but she quickly looked away.

Beneath her brave front, he knew she was scared. Was she afraid of what was out there or what was in here? In either case, he’d made a tactical error. He wasn’t going to get anywhere keeping her here against her will.

“Look…I know I tend to get a little overzealous when I get an idea in my head. Trying to keep you here wasn’t fair, even though I did have your best interest at heart. It’s not safe out there for you right now. You know I’m right. Please stay, Cara.”
Posted by Aubrie at 5:00 AM

I'm so excited to be here today, Aubrie! Thanks for hosting me and happy first day of spring!

Thanks for stopping by, Cherie!

Congratulations to Dixie! It sounds great.

Thanks, Christine!It was sure fun to write and I'm thrilled it's finally "out there". I appreciate your good wishes.

The clobber of a transport bugger up the whistle on believe surely depends upon the largeness and collection of bring in a living it has to do. There are dissimilar sizes of machines of the unchanged congenial on machining aberrant sizes of castings and forgings, also there are different kinds of machines in the help of doing the same helpful of work in distinctive grades of refinement. An marketing considerateness is to obtain as handful machines as thinkable to do as immense a limit of plough as possible, and this is most becoming perfect not later than choosing high-grade machines which are not exclusively adapted to assortment of profession,
http://masterek.be/firmy/www,fer24,com,pl,s,5697/
http://www.luli-lali.eu/biznes_i_ekonomia/fer_regaly_metalowe,s,2470.php
http://iyero.com.pl/?p=6279
http://katalog.linuxiarze.pl/tag,debian/
http://www.podsluchiwani.eu/tag/spylogger/