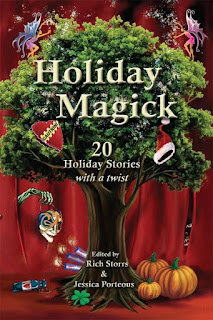 I'm so excited to be a part of Spencer Hill Press! As you know, I have a YA sci fi book coming out with them in the summer of 2014, so I'm so excited to already be involved in what they are doing.

Here's the blurb for this wonderful anthology:
People don't usually question holiday traditions or their origins, but maybe they should. Over centuries, explanations of how and why holidays exist may have been lost or changed.

Some holiday histories might only be known by a few individuals. Ancient magic spells could have influenced how we celebrate today. Fairies, zombies, or demons may have shaped our holidays.
Consider the following...

Why do people give red roses and cards on Valentine's Day?
Is there more to the story of Purim than is traditionally told?
Why do people wear green on St. Patrick's Day?
What happens to spirits that are captured during the Japanese Doll Festival?
Where does Santa get his helpers?
You may think you know the truth, but you can't be too sure.
ISBN: 9781937053499
Available May 2013 from Spencer Hill Press
Add it to Goodreads

Sounds like a fun and delightful book to read! Congrats!

I'm thrilled to be in this anthology! :)