Did you know J.A. Huss, author of the I am Just Junco series, played the flute?!


The Hidden Talents of Junco Coot

It’s the piano that trips up all her clients. “Piano?” They ask. “An assassin that plays the piano?”

Yeah, what’s wrong with playing the piano? Even baddie characters like Junco can’t be baddie all the time. That’s not cool, that’s boring.

I love to study characters in novels – I look for them in fact. Sure I love a good plot and I love good prose just as much as the next reader, but what I really love is character development.

Junco has many talents and yes, most of them are tied up in the various methods she uses to complete her jobs. She’s a heck of a knife thrower, she can shoot with amazing accuracy from long distances, and she can land a tornado kick on the chin of a guy three times her size.

But only her skill at the piano was enough to stun a room full of wanna-be warriors into silence on the eve of a death-match fight. The piano is a skill she relies on to keep her grounded and the beauty of the music is in sharp contrast to the roughness of the girl.

All characters need a hobby but Junco really needs her hobbies. It keeps her human even as her handlers draw out every last bit of humanity inside her to make her as immune to death and destruction as any one person can get.

I probably chose the piano for Junco for selfish reasons. I always wanted to play myself, but I played the flute when I was a kid. I never regretted that, but I always envied my friends who took up the piano because it seemed like an instrument where you could just lose yourself. Just sit down and play and totally lose yourself.

The scenes of Junco playing piano in the first three books of my new series, I Am Just Junco, are few and far between. None occur in the first book. Only two in the second – that’s when she makes the warriors cry with her playing. But in the third book we get a very intimate look at just how much this hobby has kept her sane over the years.

I love the piano scenes in Flight (the third book) because they reveal her inner character and they also reveal that her worth is not only tied up in her skills as a killer. There’s more to her than that. She needs this hobby, she needs to know this about herself – because if she can’t recognize the good inside her, how will she ever stop killing?

It’s the things like this that make characters stand out. Maybe playing the piano is not what Junco will be remembered for in the long run, but I know one thing for certain, she’d never make it to her end without it.

And don’t forget to enter the giveaway contest - each autographed copy of Clutch will come with some cool swag, too! 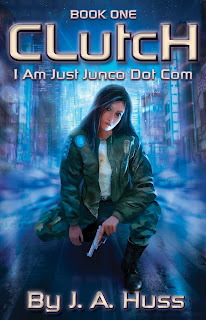 Clutch
Book One I Am Just Junco
By J.A. Huss

In 2152 the avian race is on Earth looking for something stolen from them decades ago – their genetics.  At the center of the search lies the Rural Republic; a small backwards farming country with high hopes of military domination and a penchant for illegal bioengineering.

19 year old Junco Coot is the daughter of the Rural Republic’s ranking commander. She’s the most foul-mouthed, wildly unpredictable and ruthless sniper the Rural Republic has ever trained.  But when her father’s death sparks a trip into forbidden places, she triggers events that will change everything she knows to be true.

As an elite avian military officer, Tier’s mission is to destroy the bioengineering projects, kill Commander Coot’s daughter, and return home immediately. There’s just one problem. Junco isn’t who she claims to be.

With no one to trust, not even herself, Junco must confront the secrets of her past and accept her place in the future, or risk losing herself completely. 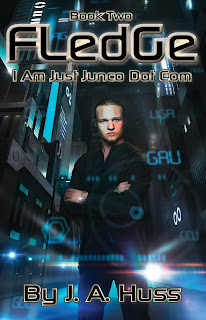 Junco Coot can’t even remember her trip off Earth; she was too busy being morphed into her new avian body.  But reality hits her hard when she wakes up to find her new life is not what she expected. Not even close. Tier is on trial for disobeying his commander’s kill order and only Junco seems to care.

In most places the avian coming-of-age Fledge ritual would be nothing more than mass murder, but here in the capital city of Amelia, it’s called growing up. Junco has no choice; either fight to the death to prove her worth or get sent back to Earth in the hands of her enemies.

Her new military team is hostile, her body is being taken over by an illicit artificial intelligence, the avian president wants her dead, and her only friend is a ten-year old throwaway boy.

On a foreign habitat, in a foreign culture, and surrounded by people she can’t trust or count on, Junco must find a way to save herself and Tier without losing her immortal soul in the process. 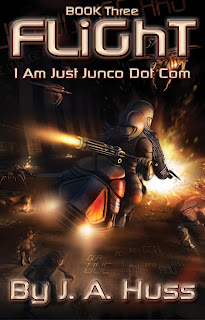 Morph into an avian body. Check.

Bring her Siblings back to Amelia and restore the avian race? Not so fast, darlin’.

There’s a new twist on an old prophecy and this one brings the End of Days. Junco must make a choice, but the choices all confirm her only worth is tied up in killing.

Lucan has secrets. Secrets that will make the Stag Camp look like playschool. And the lies are flowing like a mountain river during spring thaw. But he needs Junco to cooperate just a little bit longer or it all falls apart.

The Siblings on Earth are waiting for the Seventh to return and pull their clutch together. But Earth has secrets too -- secrets that change everything.

Junco has survived against impossible odds, but the cost of survival is higher than she ever imagined. Luck is about to catch up with Junco Coot and her debt must be paid. 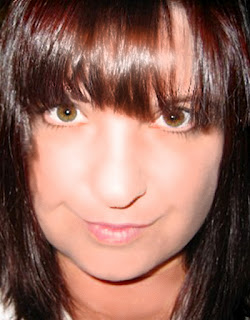 J. A. Huss never took a creative writing class in her life. Some would say it shows. Others might cut her some slack. She did however, get educated and graduated from Colorado State University with a B.S. in Equine Science. She had grand dreams of getting a Ph.D. but while she loves science, she hated academia and settled for a M.S. in Forensic Toxicology from the University of Florida.

She went on to write science curriculum for homeschoolers and now runs a successful home business that creates and offers online science unit studies. When she’s not writing science curriculum or fiction, she works as a farm inspector, traveling the Eastern Plains of Colorado in variety of environmentally friendly vehicles that never have four-wheel drive, so when she gets stuck in the mud in said vehicles, she has to beg for assistance from anyone who will help her. She is not bitter about that at all.

She’s always packing heat and she is owned by two donkeys, five dogs, more chickens and ducks than she can count, and of course, the real filthy animals, her kids. The I Am Just Junco series was born after falling in love with the ugliest part of Colorado and the Rural Republic is based on the area of the state she currently resides in, minus the mutants, of course.

Thanks for having me on your website! I did play the flute as a kid - far longer than it was cool in school to do so! (It was a lot of fun too!) :)