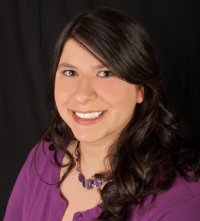 Thank you, Aubrie, for having me over. I do most of my plotting/scene work while driving in the car. Occasionally (or to be more specific, when I’m stumped on a scene), I’ll crank up the radio and listen to music. But bring a writer, I’m drawn more to the lyrics than the melody. Sometimes a line or two of a song will spark a scene, help me figure out a character’s motivation, or sometimes even inspire an entire story (ex – “Would You…” by Touch and Go).

The hardest novel I’ve had to write was a story I didn’t set out to write. It’s the sequel Tangled Web, so I needed to come up with a story that equaled the intensity of the first book. I knew who the book was about and what the basic plot was since I had to come up with a synopsis when I sold it, but it was all the filler that was rattling around in my mind during the daily commute.

Then Ace of Base came on (Yes, I’m that old :P). As I listened to the lyrics of “Don’t Turn Around”, a scene bloomed in my mind. I saw the Heroine presenting the Hero with a choice—go with her or complete his mission—knowing he would choose the latter even though it broke her heart. I saw her putting on a brave face for him, telling him not to worry about her and that she understood his decision. And then I saw him turning around as he walked away and the way that one final glance tore her apart on the inside.
One little song had the power to inspire such an intense, emotional scene, and I knew I had a great turning point for my story.

As I wrote the novel, I found songs here and there that helped me work through certain scenes. “Closer” by Nine Inch Nails set the tone for the first love scene (there’s a bit of a power-play between this couple), whereas “Your Body is a Wonderland” by John Mayer fit the final love scene. “Perfect” by Pink helped me develop those scenes between the couple (out of bed) as they both came to term with their imperfections and found the beauty in them.
Are there certain songs that immediately cause a scene from a book to pop into your head? If so, what are they?
And now for Crista's Awesome New Release! (4 stars Romance Times) 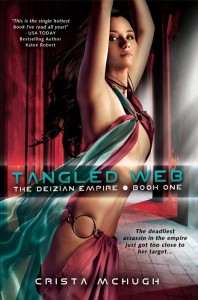 Azurha, a former slave turned deadliest assassin in the empire, has just been offered the ultimate challenge—seduce, then murder the new Emperor. But Titus is not the tyrant his forefathers were, and his radical ideas might be the glimmer of hope the empire needs.
Titus Sergius Flavus has yet to master the powerful magic of his ancestors—magic he must wield if he’s to protect his people—but his father’s death has left him no choice. Rule the Deizian Empire and attempt to right his ancestors’ wrongs, or watch her fall to his greedy kin.
More than just Titus’ ideas hold Azurha captive. Night after night, he awakens desires she thought lost, and uncovers the magic of her hidden lineage. As her deadline approaches, Azurha is forced to make an impossible decision—complete her job and kill the man she loves, or fail and forfeit both their lives.

Great post! I love hearing how music inspires other people. I have so many tunes on my playlist that are strongly identified with specific characters or scenes that it's now hard to hear them without flashing back.

Sarah Brightman's "Ghost In The Machinery" always reminds me of Kit from Flow, even though there's no direct correlation in the lyrics - more the attitude and implied situation. And Gloria Estefan's "Dangerous Game" has always been Miayde and Treddian's relationship (from Butterfly's Poison, still seeking a home) in a nutshell ... the advantage being it works equally well from both perspectives.

I also love pulling inspiration from music. Thanks for the fun post!