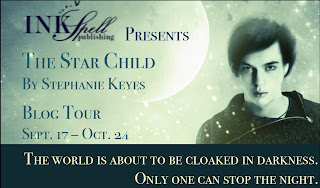 I'm very excited to host the Star Child by Stephanie Keyes on my blog today! Stephanie is a fellow author at Inkspell Publishing. I recently visited her blog as part of her Fall Fantasy Author Series. To read my post on Word Building and visit Stephanie's blog, click here.

Now about the Star Child: 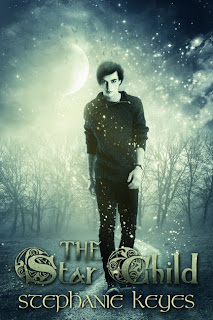 The world is about to be cloaked in darkness. Only one can stop the night.

Kellen St. James has spent his entire life being overlooked as an unwanted, ordinary, slightly geeky kid. That is until a beautiful girl, one who has haunted his dreams for the past eleven years of his life, shows up spinning tales of a prophecy. Not just any old prophecy either, but one in which Kellen plays a key role.

Suddenly, Kellen finds himself on the run through a Celtic underworld of faeries and demons, angels and gods, not to mention a really ticked off pack of hellhounds, all in order to save the world from darkness. But will they make it in time? 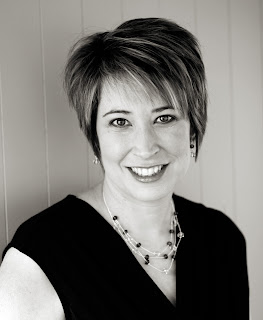 Stephanie Keyes holds an undergraduate degree in Management Information Systems as well as a Master's in Education. A seasoned, facilitator, Mrs. Keyes worked in Training and Development for an international telecommunications corporation for twelve years; spending the first eight years of her career as a Software Trainer and Technical Writer and the last four working in Human Resources and Employee Development.

In May of 2012, Mrs. Keyes left the corporate world to focus on her family and her writing full-time. She also operates a freelance graphic and instructional design business, Sycamore Road Design.

Inkspell Publishing will release her first novel, The Star Child, on September 21, 2012. She is now currently at work on the second book in The Star Child Trilogy, The Fallen Stars.

Keyes lives in Pennsylvania with her husband, two children, and Riley the dog.

Aubrie,
Thank you so much for hosting The Star Child today for the kick-off of what I'm sure will be a wonderful tour. It's so nice to spend day one with another Inkspell author! I wish you all the best on your new contract and with your writing!

The Star Child sounds like a great read. I love the cover. Very nice!
debby236 at gmail dot com

Sounds interesting... off to check more about the book...

You are so welcome! What a great book and a lovely cover!

Debby, thanks for stopping by!

Debdatta, thanks for stopping by and checking it out!

Thanks to Debby, Sheryl, and Debdatta! So glad you could pop by for a visit! So glad to hear that it piqued your interest! Sheryl, thanks for the "Good Luck"!