Natalie Damschroder Talks About the Release of Her 11th Book! 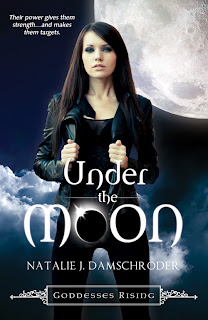 Thanks, Aubrie, for having me as a guest today!

I just celebrated the release of my 11th book, which is actually a re-release of a book from December, but with a new cover and national distribution. So I didn't expect it to be very exciting. Plus, I've had over 3 dozen release days, when you count short stories and novellas. *shrug*, right? Old hat. Same old, same old.

But I'm finding that none of that matters. There's still the "squeee, my book is out!" feeling when release day hits. Here are some of the specific elements that made this one so awesome:

1. New readers!
My fantastic publicist set up a short blog tour, breaking up chapter one into 7 pieces. It was really gratifying to get so many comments from new readers who thought the book sounded like something they wanted to read.

2. Increasing numbers on Goodreads.
With the blog tour and a giveaway on Goodreads, the book got added to about a hundred more "to read" shelves. Hopefully, that will translate, over the next few months, into more ratings and reviews. It's nice to see continued movement and interest in a book. Writers want longevity! :)

3. More followers!
With industry pressure on authors to promote via social media, pretty much non-stop, it's a relief to have a growth in the number of followers on Facebook and Twitter that are readers, and not just authors or friends. I love meeting new people online and seeing what else we might have in common.

Speaking of which, have you seen Under the Moon in the wild? If you have, send me a tweet, tag me on Facebook, or send it by e-mail to natalie AT nataliedamschroder DOT com. Pictures are best, but not necessary. I'll send you an Under the Moon magnet!

Natalie J. Damschroder grew up in Massachusetts, and loves the New England Patriots more than anything. (Except her family. And writing and reading. And popcorn.) When she's not writing romantic adventure for Carina Press and paranormal romance for Entangled Publishing, she does freelance editing and works part time as a chiropractic assistant. She and her husband have two daughters they've dubbed "the anti-teenagers," one of whom is also a novelist. (The other one prefers math. Smart kid. Practical.) You can learn more about her and her books at www.nataliedamschroder.com.

Under the Moon
Book 1 of Goddesses Rising

Their power gives them strength…and makes them targets.

Modern-day goddesses descended from the ancients live normal lives enhanced by their ability to tap into a variety of power sources. This ability has commercial applications of unlimited potential, kept in check by the equally ancient Society for Goddess Education and Defense.

Quinn Caldwell is the epitome of the modern goddess. Her power source is the moon, her abilities restricted only by physical resources and lunar phase. She runs a consulting business and her father's bar, serves on the board of the Society, and yearns for Nick Jarrett, professional goddess protector and the soul mate she can never have.

But someone has developed the rare and difficult ability to drain a goddess of her powers, and Quinn is a target. With the world thinking Nick has gone rogue (whatever that means) and that Quinn is influenced by "family ties" she didn't know she had, keeping themselves safe while working to find the enemy proves harder each day. But not as hard as denying their hearts…

Get Under the Moon at Amazon, Barnes & Noble, Books-a-Million, or your favorite retailer

Thanks, Theresa! Appreciate you stopping by!

I'm sorry about the failed code for the giveaway. You can go here to enter!

Thanks so much for hosting me, Aubrie, and CONGRATULATIONS on your additional sales to Entangled and Inkspell!