The Milestone Tapes by Ashley Mackler-Paternostro 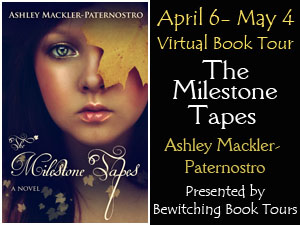 Jenna Chamberland never wanted anything more than to be a wife and mother. That is, until she realized that her life was ending after a three-year battle against breast cancer. Now, all she really wants is more time.
With 4,320 hours left to live, Jenna worries for her loved ones and what she knows awaits them on the other side: Gabe will have to make the slip from husband to widower, left alone to raise their seven-year-old daughter; Mia will be forced to cope with life without her mother by her side. In a moment of reflection, Jenna decides to record a set of audiocassettes — The Milestone Tapes – leaving her voice behind as a legacy for her daughter.
Nine years later, Mia is a precocious sixteen-year-old and her life is changing all around, all she wants is her mother. Through the tapes, Jenna’s voice returns to teach Mia the magic of life, her words showing her daughter how to spread her wings and embrace the coming challenges with humor, grace and hope.
THE MILESTONE TAPES is the journey of love between a parent and child, and of the bonds that hold them when life no longer can.
Amazon
Barnes and Noble

Heal Yourself With Your Words

“For your born writer, nothing is so healing as the realization that he can come upon the right word” - Catherine Drinker Bowen

The truth: Life is not without pain.  And in that pain, we learn lessons.  Some are about strength, others about weakness.  But, we learn ... we grow ... and we change.

When I was thirteen, in the late fall of nineteen-ninety-seven, my mother sat me down at the kitchen table to level a blow that would change for my whole world, define my coming years, alter the way I thought about things like life and the stability of home.  Her words would essentially dash the bubble of innocence I’d, until that point, survived in.

She -- my loving, funny, overly involved, endlessly supportive mother, had cancer.  Breast cancer, infiltrating ductal carcinoma.  Her chances of survival, less that sixty precent -- she was stage three.  The lump, was the size of a baseball, nestled in the pocket of her left breast, hovering over her heart.  She would begin treatment at the start of the year.  Twelve rounds of chemotherapy, thirty-three radiation treatments -- laser focused on pin-prick tattoos, chemically induced anorexia, all to save her life.  And then, a radical mastectomy which would not only steal her breast, but her lymph nodes leaving her with lymphedema for the rest of her life -- that is would wait for her on the other side of this disease.

I was a child when I sat down with her at the table that night ... and when I stood up and walked away, I was suddenly an adult. Thrust into a grown-up world where I would be told to face the mortality of my mother.  To understand that life is no more than a temporary gift and that what is given can also be taken away.

The following year was one of collecting and gathering for my mother and me.  We spent hours discussing the nuances of relationships -- the one I’d have with myself and the sort I’d share with other people.  She told me stories of her childhood; the wild, reckless things she’d done, the men she dated, the way she felt about marriage and how much she loved my father, her hopes and her dreams for her daughters.

The irony ... there was good in that period of sadness.  I was able to the understand who my mother was as a human being and not just love the woman who raised me ...but even with that, there was an ebbing undercurrent of pain.

I watched my sister, eight years old and scared to death, go through the motions of a new life that she couldn’t understand.  In our new reality was a place where nothing made sense to her, where things like ‘cancer’ and “chemo’ became everyday considerations, where coughs were met with watchful eyes, where good days were few and greatly out numbered by the bad.  And when I look back on it now, whatever I felt --  be it all the anger or frustration or fear -- it was never for me, or even my mom, it was for my sister.

Who would she grow up to be?  What memories would she have?  How would she move on not knowing what she could have known, had things been different.  At thirteen, those kept me up at night.

Pain like that, when it’s pain bred from fear, you don’t outgrow.  You don’t wake up one day with clarity, you never find a way to make sense of the senseless.  You learn to live with it because what else can you do.

Well, as I’ve learned, you can write.  Get it down on paper, give up the dark to the light, give your worries away with words and punctuation.

In the spring of two-thousand-and-eleven I sat down to write the story that would become THE MILESTONE TAPES. I called upon my thirteenth year, and I wrote every fear I had into the lives of my characters.  I wrote from a place that had haunted me for fifteen years until suddenly, I wasn’t haunted any longer. And that peace, it came from knowing how the story ended.  I’d always feared we’d broken people, defined by loss and cheated out of happiness.  But with each line of my story, I came to understand, what could have been wasn’t the dark, hopeless place I’d feared.  There was, in face of loss, a place hope and healing.

Each word that flowed from the tips of my fingers answered unasked questions.  With each new chapter I moved a little bit further on.  Until, after one-hundred-thousand-words, I was whole and my novel was finished.

Telling the story of the Chamberland’s through my own personal journey, blurring the lines of real and fiction under the guise of being literary, was the greatest gift I could have ever given myself.

In the summer of nineteen-ninety-eight, my mother went into remission. Her hair grew back in curls -- twisted strands of red and grey.  She looked different and we were all different for having made it through.  And this story, it’s ours.  But, we’re not alone.

Writing it down, letting your thoughts move the cursor, can be the greatest sort of therapy.  You can give yourself unfettered permission to acknowledge your fears and address the pain, and in time you’ll notice, as you give the words away to the paper, you’re giving your hurt away as well.

Ashley Mackler-Paternostro lives on the outskirts of Chicago with her husband and their three dogs.  The Milestone Tapes is Ashley’s first novel.

Brave and sad and well worth reading.

Thank you Carole for your kind words.

I enjoyed this book.