Today we have a special excerpt from Fighting Gravity, a novella that I was a critique partner for!


Take it away, Cherie!

Hello! I’m excited to announce the release of Fighting Gravity, book two of the Gravity trilogy. Each book is a novelette-length futuristic space fantasy following two main characters in their quest for freedom and love. Today I have an excerpt for you from Phoebus’s (an Aresian) point of view.

“Let them come.” Quiet rage bubbled within Phoebus’s veins. With his mind, he sensed the weapons upon his cruiser. The laser guns tugged at his heart. If he wanted, he would give into his daimon and protect himself.

A hiss rose from the vidcom, and Hara, his mother, filled the screen. Dark hair sprouted from her typically shaved head. Her cheek bones looked sharp enough to slice steel. Red eyes widened and focused upon him. Of course, they would use her. He should’ve known.

“You’re bleeding.” Her crisp voice cut across space and time.

“Not anymore. You won’t change my mind.” He folded his arms over his chest, now completely healed from his attempt to remove the daimon’s mark.

“They’re coming for your ship, Phoebus, and they’ll bring you home. What were you thinking leaving Aresia like that? You have a job to do. What does your daimon say?”

Of course, she didn’t really care about the blood, his attempts.

“It told me they’re coming.” His shoulders slumped. His escape hadn’t gone quite as unnoticed as he’d hoped. Why couldn’t his daimon be wrong? If his people were close, then he might not enter the wormhole in time. “I never asked for this.”

“Ask for it?” Her laugh burst from her lips in a harsh, high-pitched, and cold tone. “A daimon like yours is fortuitous. Only one every hundred years has the dagger and serpent.”

Lucky, sure, she’d believe that. “They have me killing Aresians.”

“Traitors to our cause and laws.” A sneer curled her lips. “You were always weak, like your father.”

His back straightened and eyes narrowed. “Dying isn’t weak.”

“His daimon rejected him.” She shot back, anger tainting her voice.

That got Mother. Always did.

A blip to his left alerted him to the monitor. Five dots, or crafts, chased him. Escape beckoned. A few more minutes and he’d enter the wormhole.

“As much as I enjoyed this chat, it’s time for me to go.” His fingers danced over the panels and summoned the force shield a mere nanosecond before the first blast.

“Just concede and return home. Don’t be like your father. He was a good-for-nothing—”

“No can do. This is good-bye.” He slammed his fist into the vidcom’s screen. It shattered and went black. Although glass embedded into his hand, he smiled. Yes, this was good-bye. He’d been waiting his entire life for this chance.

As a special treat, Defying Gravity, book one of the Gravity trilogy is free on Amazon until May 4th. Don’t have a Kindle? No problem. You can download the Kindle app for free on many devices.

For an excerpt of Defying Gravity, please click on the book cover on Amazon.

Thank you so much for having me today on your blog!

You're Welcome, Cherie!!! Thanks so much for being such a great critique partner and friend! 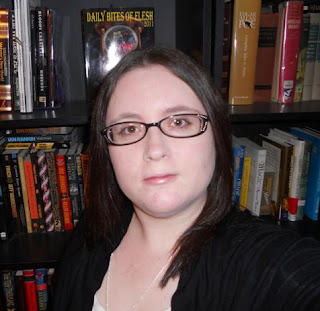 Cherie Reich is a writer, freelance editor and library assistant. She enjoys writing horror, fantasy, and mysteries, but she doesn’t let that stop her from trying other genres. Her short stories have appeared in magazines and anthologies, and her e-books include Once Upon a December Nightmare, The Best of Raven and the Writing Desk, and Defying Gravity. She is a member of the Virginia Writers Club and Valley Writers and placed third in Roanoke Valley’s BIG READ writing contest.

Thanks for introducing more from this individual author's work.

Thank you so much for having me, Aubrie!

*waves to Carole* Nice to meet you!

Great excerpt! It's a fantastic story.