New Release for my Critique Partner!!! 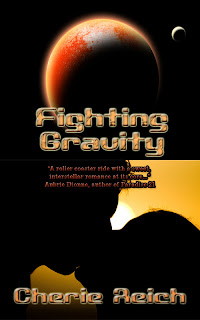 I'm so excited to announce my critique partner's new release! Cherie Reich has been my critique partner for so long, I can't imagine writing life without her. I'm so lucky to be able to work with her on these and read them before the whole world does! Defying Gravity is the first in this trilogy, but each book also stands on its own.

Forced into executing Aresia's people, Phoebus escapes the Aresian Guard by flying his spaceship through a wormhole.

The only single woman of marrying age, Marissa flees her prospects of becoming Elder McGee's third wife for a chance at freedom upon the New Atlantic Ocean.

When Phoebus's spacecraft crashes upon an asteroid-ravaged Earth, he is captured by a rogue Earthling youth and thrown into a cellar. Marissa stumbles upon the spacecraft, but it explodes before she can find any sign of the alien. When she awakens, she discovers the alien's whereabouts and vows to help him. They plot his escape when they learn Phoebus's Aresians have landed and are searching for him. Phoebus and Marissa must battle against their despair and their peoples in their quest for freedom and love. And through it all, an Earthling and an Aresian will find it easier to fight gravity than their love for each other.

Buy from Amazon
Buy from Smashwords 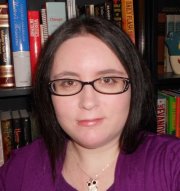 Cherie Reich is a writer, freelance editor, book blogger, and library assistant. She enjoys writing horror, fantasy, and mysteries, but she doesn't let that stop her from trying other genres. Her short stories have appeared in magazines and anthologies, and her novelettes are published as e-books. She is a member of the Virginia Writers Club and Valley Writers and placed third in Roanoke Valley's BIG READ writing contest.


A self-proclaimed bookworm, Cherie received her bachelors of the arts in Classical Antiquities at Missouri State University. She currently lives in Virginia with her family and four adorable pets: Cinderella the cat, Romeo the cat, Abby the guinea pig, and Dash the goldfish. Besides working in a library, she is surrounded by over 1000 books in her room at home. Can anyone say bibliophile?

Aww! Thank you for mentioning my book, Aubrie!