Why I'm So Excited About Promethius!!

A team of scientists journey through the universe on the spaceship "Prometheus" on a voyage to investigate Alien life forms. The team of scientists becomes stranded on an Alien world, and as they struggle to survive it becomes clear that the horrors they experience are not just a threat to themselves, but to all of mankind. Written by WellardRockard

As two superpowers fight each other on Earth for the remaining natural resources throughout the solar system, a giant spaceship, known as the Prometheus, is sent to the distant planet of Erix to terraform the world, but problems arise when the crew discover the uninhabitable planet's indigenous life of bio-mechanoid killers. Written by Anonymous


1. I am a big fan of the Alien series. Ripley is one of my all time favorite female sci fi role models! They are saying this movie is a PREQUEL to the Alien series. It will feature an Xenomorph ancestor/parent of the "alien" that we know so well!

2. They say this film will delve deeper than than the others, providing us answers to to big questions about life and the universe. I LOVE complicated sci fi.

and then he played Magneto: 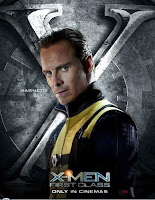 I can't wait to see him as a cyborg! 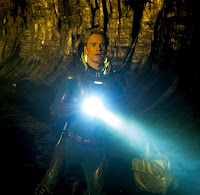 It's almost hard to recognize him with the blond hair!

4. Charlize Theron is also in it:

Ever since the film "Monster" I've had great respect for her. This is not her first sci fi, either! she starred in AEon Flux back in 2005. (Also a great movie)

I'm not sure. I'm not good with scary alien movies, but I know my boys are looking forward to it.

Sorry, not for me. I never got into the Alien movies.

Give me more Superheroes. ;) Although I'm not really sure about the Spiderman reboot. It didn't look that good from the preview I saw at Hunger Games.

Sounds like a movie my husband and two daughters would like to see. They're really into the alien thing. Me...not so much. :)

Prometheus looks awesome! I saw the trailer during The Hunger Games previews. I don't know if I'll get to see it in the movie theater, though, since I so rarely go to the movies.

I want to see it, but my chances of getting to a theatre any time in the next few years is tiny unless I go by myself. The movie looks fabulous. You'll have to do a review for it and let me know!