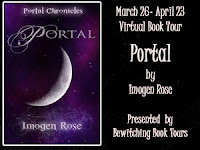 On behalf of Bewitching Book Tours, I'm excited to share this new sci fi release with you today!

Come Find Me Two Years Ago...

She suddenly found herself in the past. In one moment she went from being an ice hockey playing teenager in New Jersey to a glamorous cheerleader in California. She found herself transported from a happy life with her dad, Dillard, to a new, strange one living with her mother whom she hates. Apparently it's a life she's always lived in.

Everyone knows her as Arizona Darley, but she isn't. She is Arizona Stevens.

As she struggles to find answers she is certain of one thing- that her mother Olivia, a brilliant physicist, is somehow responsible...

PORTAL is the story of the repercussions of Olivia Darley's attempt at creating a perfect world for herself and her children. Arizona's quest for answers threatens to undermine the seemingly perfect world that her mother has so carefully constructed.

PORTAL is the first book of the Portal Chronicles. Fans of time travel, romance, and the supernatural will enjoy Arizona's quest for answers.

Imogen Rose is the author of the bestselling YA series, the Portal Chronicles. She was born in a small town in Sweden and moved to London in her twenties. After obtaining a PhD in immunology from Imperial College, she moved with her family to New Jersey, where she’s been based for the past ten years.

For as long as she can remember, Imogen has dreamt stories. Stories that continued from night to night, from dream to dream. So, even as a child, going to bed was never an issue, just an anticipation of the story to come.
PORTAL, Imogen’s first novel, would have remained in her imagination, to be shared only with her daughter, Lauren, had her eight-year-old not insisted that she write it down. In the course of a month, Imogen typed while Lauren waited eagerly by the printer for the pages to appear, and a novel took shape.

The warm reception PORTAL received encouraged her to continue with the story and the Portal Chronicles. The Bonfire Chronicles is Imogen’s new YA paranormal series.

Imogen is a self-confessed Hermès addict who enjoys shopping, traveling, watching movies and playing with her dog, Tallulah.

For the Portal Tour Imogen is giving away:


Open to US Shipping

Click here for the tour page giveaway!
Posted by Aubrie at 6:00 AM

Imogen got me with The Bonfire Academy book one, now I have read 3 of her other books and am onto Portal book 3. Portal is amazing it is such an amazing read you literally won't want to put the book down! 5 stars without a doubt!

I would die for any book signed (esp. if it is personally signed to me)!

Portal sounds very cool, and the cover is so pretty. Then again, I'm a sucker for purple covers.

I'm so disappointed that someone else beat me to setting up an account named imogenobsessed.

The cover draws me into a book usually, but it was her previous book that drew me into this one. You will not be sorry if you read it! Unless not being able to put a book down and reading the next book in the series immediately after is an issue for you! :)!

LOL, that is hysterical!

I have read all of Imogen's books and I love how she is tying the different worlds together! I can highly recommend all of her books!

And the new covers are AWESOME!

Oh - this sounds very good. I don't know how I'll ever read all these new great stories and new authors arriving.

I'll definitely check this one out, sounds interesting.

Aubrey, thank you so much for hosting me on you blog.