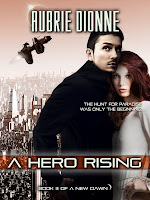 I'm so excited to announce the prequel to the New Dawn series is available on Amazon and Barnes and Noble.

This is perfect if you haven't read the series and want a place to start, or if you have read one or two of the books and would like to know what happened to the people left on Earth.

Or if you just like zombies. Because there's thousands of them in this book. I just went zombie crazy!

After watching his love leave on a colony ship, James Wilfred must save those left behind from a planetary apocalypse. Their salvation lies in an unfinished ship tucked away in a secret government base, and only James can break in and pilot him and his people to freedom on a nearby space station.

FIVE LUCKY COMMENTERS WILL WIN A COPY ON KINDLE OR NOOK.

Just leave a comment below with your email.
Posted by Aubrie at 6:00 AM

This looks awesome! Haven't read a good zombie book in a while :)

hi Aubrie! i already have a review copy. i just wanted to drop by and say hi. i'll be posting my reviews of Tundra 37 and A Hero Rising soon. have a good one! c",)

Excellent. I would love to snag a copy! I write new adult and love anything I can get my hands on in the genre. Thanks for the giveaway :)

I love that...like less than a sandwich. :D
It's perfect because I used to spend that hidden dollar on a quick run through the drive-thru or something... ya know? satisfying the urge to spend money when I only had a few dollars in my pocket.
Now I can actually get a book! haha.

I've never read a zombie book, but I do love the space opera.

Looks great!! :) Can't wait to read. Thanks for the chance.

Woo-hoo for zombies! I'm excited for your second release this month. :)

Zombies are always fun to read about!

It's an awesome read! Everyone should go read it. :) And yes, I already have a copy too.