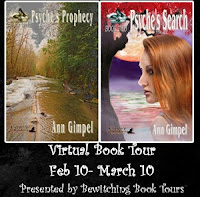 I'm excited to welcome fellow Gypsy Shadow Publishing author, Ann Gimpel, to my blog today! Ann is a good writer friend of mine, and I love her books. Ann has a great post on character development. Take it away, Ann!!!

The Psychology of Character Development

Welcome to my guest blog post! Thanks in advance for your time.

Since psychology is a comfort zone for me, it seems logical to blog about the psychology of character development. Have you ever wondered why some fictional characters feel so real it seems you could easily know them, while others feel wooden and contrived? Or worse, when an author builds a character who feels real up until they suddenly don't because of some event that simply jars your sensibilities; and you toss the book aside feeling cheated. Or, when you get partway through a book and all the characters feel alike? Or, they're two dimensional and it's difficult to understand why they're doing what they are. And you find yourself paging backwards to see if you missed something. Of course that's much harder to do with e-readers. (My only pet peeve w/my Kindle . . . I've never been a "linear" reader. So, to have lost my ability to go easily backwards and forwards in the Kindle is annoying.)

I'm sure all authors address character development a bit differently. And, truth be told, I wish I could because the way my characters come to life is intrusive. Once "born", they run about in my head like little mad things. If I try to make them do something they don't like, they let me know about it in no uncertain terms. That's why I'm an "organic" writer. I've tried outlining my material and found it to be a waste of time when my protagonist simply thumbs her nose at me if I push her in a direction she doesn't want to go. Patiently explaining about the plot has proven meaningless. Besides, people think I've gone bonkers when they see me having conversations with myself!

Before I started writing fiction, I didn't understand this at all. Years ago when I read an interview by Diana Gabaldon when she complained about her protag, Clare Randall, simply refusing to cooperate, I just rolled my eyes. Now I understand perfectly. Apologies, Diana!

I suppose most of my books begin in my head with a protagonist. Once I have the protag, I need to figure out which setting would work best for them. Is it modern day America? Or do they live in a high fantasy world, or a science fiction one? They usually let me know right away if I've gotten it wrong. If I’m going for high fantasy where I need to do extensive world-building, I usually try to have at least some of that mapped out first. Maybe it’s a built-in deficit, but I find I cannot build both worlds and characters at the same time. The credibility of my story suffers badly if I try.

Characters are just like us--except they're larger than life. What that means is, while you and I might think about an unusual act of heroism, my characters will actually do it. Oh, they'll be plenty scared; but they'll mow right ahead in spite of it. When you think about it, a working definition of courage or heroism is action in the face of fear. If I have a character in a situation that would scare me, of course it scares them too. Unless the character is a sociopath. They aren't particularly sensitive to the feelings that plague the rest of us. Things like compassion, fear, honor, etc. Sociopaths manipulate others and are able to do so without much in the way of emotional fallout . . . at least to themselves. Everyone around them suffers terribly.

So long as we're on the topic of sociopaths, the very best books have well-drawn, three dimensional antagonists as well as strong protags. Without digging too terribly deeply, I can generally find something in any antagnoist to at least try to link to a reader's sensibilities. For example, one of the antagonists in my novel, Psyche's Prophecy, had a perfectly wretched childhood. When he finally dies, my protag is able to engage in a believable moment of compassion when she thinks to herself that he never had a chance because some things that happen to children just can't be undone. Humans usually have mixed feelings about lots of things. It's important for characters to be able to see things from more than one point of view as well. That's one of the tools an author has to make characters feel believable.

While it’s fun to go to the movies and watch superheroes mow through one catastrophe after the next, guns blazing, readers want fictional characters they can relate to. I know what my process looks like. I’m interested in how others come up with their characters. From a reader perspective, which characters work best for you? Who have some of your favorites been and why?

And now for her books:

What if your psychotherapist could really see into your soul? Picture all those secrets lying hidden, perhaps squirming a bit, just out of view. Would you invite your analyst to take a peek behind that gossamer curtain? Read your aura? Scry your future…?

Classically trained at the Jung Institute in Zurich, Doctor Lara McInnis has a special gift that helps her with her patients. Born with “the sight” she can read auras, while flirting with a somewhat elusive ability to foretell the future. Lara becomes alarmed when several of her patients—and a student or two—tell her about the same cataclysmic dream.

Reaching out to the Institute for answers, Lara’s paranormal ability sounds a sharp warning and she runs up hard against a dead end. Her search for assistance leads her to a Sidhe and ancient Celtic rituals blaze their way into her life. Complicating the picture is a deranged patient who’s been hell bent on destroying Lara ever since she tried to help his abused wife, a boyfriend with a long-buried secret and a society that’s crumbling to dust as shortages of everything from electricity to food escalate.

Amazon Paperback Amazon Kindle BN Smashwords
ARe Books on Board

Born with the sight, Laura McInnis is ambivalent about her paranormal ability. Oh it’s useful enough some of the time with her psychotherapy patients. But mostly it’s an embarrassment and an inconvenience—especially when her visions drag her to other worlds. Or into Goblin dens. In spite of escalating violence, incipient food shortages and frequent power blackouts, Lara is still far too attached to the comfortable life she shares with her boyfriend, Trevor, a flight attendant who lost his job when aviation fuel got so expensive—and so scarce—his airline went out of business. Forced to seek assistance to hone her unusual abilities in Psyche’s Prophecy, Book I of this series, Lara is still quite the neophyte in terms of either summoning or bending her magic to do much of anything.

Reluctantly roped into channeling her unpredictable psychic talents to help a detective who saved her from a psychopathic killer, Lara soon finds herself stranded in the murky underbelly of a world inhabited by demons. The Sidhe offer hope, but they are so high-handed Lara stubbornly resists their suggestions. Riots, death on all sides, a mysterious accident and one particular demon targeting her, push Lara to make some hard decisions. When all seems lost, the Dreaming, nestled in the heart of Celtic magic, calls out to her.

Ann Gimpel is a clinical psychologist, with a Jungian bent. Avocations include mountaineering, skiing, wilderness photography and, of course, writing. A lifelong aficionado of the unusual, she began writing speculative fiction a few years ago. Since then her short fiction has appeared in a number of webzines and anthologies. Two novels, Psyche’s Prophecy, and its sequel, Psyche’s Search, have been published by Gypsy Shadow Publishing, a small press. A husband, grown children, grandchildren and three wolf hybrids round out her family.

Thanks so much for hosting me, Aubrie! Writing all the posts for this blog tour has been interesting. Made me feel like I was back in college and had lots of papers due.

Hi Ann, hi Aubrie! A big hello to you two!

Thanks Ann for the insight into how you create and bring to life your characters!

Good luck with Psyche Prophecy - Lara sounds like a most adventurous amazing woman with a most astonishing gift! Take care
x

I am drawn to deeply complex, intellectual characters with real flaws and real issues...who struggle with their morality, or question certain things in life. I think the worse thing in literature is a flat character with no depth. It doesn't matter how well a story is written, if a character is one-dimensional, the whole story is ruined for me.

Also, I write the exact same way that you mentioned. I've never been able to do outlines successfully (though I have found that organizing scenes and character traits is pretty darn fun--as long as its loose and easily changeable). And like you, I'd hear all these writers talking about the things their characters would tell them or make them write, etc., and I thought they were crazy (or knew something I didn't). Now though, I've been subjected to some pretty bossy characters who have flat out refused to do as I wanted!

I also think that's one downfall of the Kindle/e-readers. I literally fought with myself about getting one, and only gave in because I found it would be beneficial to me for when I edited and formatted clients manuscripts.

@ Kemari--To expand a bit on e-readers: My pet peeve about my Kindle is I tend not to be a linear reader. I like to skip back and forth sometimes and you just cannot do that effectively with e-readers without going through a complex book-marking process.

Enjoyed reading your post on the psychology of character development, Ann. It is SO important to know our characters very well if we want to write them well. In my novel, my protag starts out as timid and naive but her struggles turn her into a strong and courageous young woman, which is the kind of character I prefer to see in fiction. Some writers may think that psychological profiles, quirks and habits are not all that important in the development of our characters, but they really are because all that stuff makes our characters more human, therefore more realistic and even relatable, which helps readers connect to them all the more. Good luck with your books!

klonopin online klonopin dosage reviews - how to get high off klonopin

buy klonopin side effects does klonopin have - klonopin hydrocodone

ambien without a rx ambien side effects zoloft - ambien cr 12.5 not working

buy viagra professional viagra for women over the counter - viagra

buy cialis can you order cialis online - generic cialis from us