I'm excited to welcome author Ciara Knight to my blog. She's agreed to give one lucky commenter an ebook of Curse of the Gremdon. So, stay tuned to leave a comment with your email at the end.

You’re Going to Write What?!?

When I first decided to write The Curse of Gremdon, I was told by several reader and writer friends that I was crazy. You DON’T blend high fantasy with romance. It just isn’t done.

To give you an idea of some of the reactions, I thought I’d share two conversations with you.

First, a conversation via FB chat with a fantasy reader named Bob:

Bob: So tell me about this fantasy book.

Ciara: Well, I’m writing a world where a Curse falls upon the land. Elders arrive and save the people, but now they have to live locked behind the castle walls, or face murderous creatures that were once their family and friends.

Bob: So, people have to live behind the castle walls, or they’ll be Cursed, too?

Bob: What happens once they are trapped?

Ciara: In the castle, marriage is forbidden and sex is only granted to male warriors.

Bob: Sex? What does that have to do with fantasy?

Bob: You can’t mix a high fantasy, sword and sorcery type book, with romance!
It actually got a little more brutal as the conversation progressed, but you get the gist of it.

Second conversation with Betty Sue, a writer at a conference:

Betty Sue: So, there is forbidden love, and sex is only allowed when trained women are given as gifts to the men who protect others. Are they big strong men with lots of corded muscles? *licks lips and lifts eyebrows*

Ciara: No. It’s a fantasy romance.

Betty Sue: Well, that won’t sell, darling. You can’t mix those two. What romance reader will want to read about dragons?

Ciara: There are no dragons.

Betty Sue: Well, that’s just dumb. *shakes head* You HAVE to have dragons if it’s a fantasy novel.

Friend at my other side whispers in my ear, “Tell her two dragons do it and she’ll shut up.”

When I set out to write The Curse of Gremdon, I had no intention of creating something that crossed genres, or breaking ground on a new sub-genre. Heck, I still think there are other books out there like mine. But, perhaps they just haven’t made one of the cool top 100 Amazon lists yet. Maybe, The Curse of Gremdon will be the first. Hey, I can dream, right?

***Update on FB reader friend, Bob. He read and loved The Curse of Gremdon. After he finished reading his FIRST romance novel, he asked me if women really thought like that. If so, he knew why he was still single. He had no clue what women wanted.
All names have been changed to protect those who do not support high fantasy romance. We wouldn’t want any public stonings here.

Great guest post, Ciara! I write fantasy romance myself, so I totally get what you're doing. You go, girl!

Now a little about Ciara: 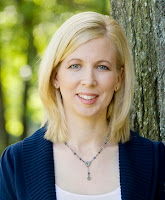 Ciara Knight always had a passion for storytelling. At an early age, she wrote several short stories and poems, and in college she started work on her first novel. It wasn’t until late 2008 that she returned to her true passion of writing. Over the past few years she has penned five novels and joined several professional writing organizations to better her craft.

When not writing, she enjoys reading all types of fiction. Some great literary influences in her life include Edgar Allen Poe, Shakespeare, Francine Rivers and J K Rowling.

Ciara is happily married and enjoys family time. She has learned to embrace chaos, which is a requirement when raising three boys, and utilizes the insanity to create stories not of this world including, Fantasy, Paranormal, Sci-Fi, and Young Adult Dystopian.

Her first love, besides her family, reading, and writing, is travel. She’s backpacked through Europe, visited orphanages in China, and landed in a helicopter on a glacier in Alaska.

Thanks for having me here today, Aubrey. I'm excited to meet some new friends and hang at your blog.

I'm sorry I meant to type Aubrie. :) I should have had morning coffee before trying to blog. :)

You have my attention I want to read it.
Theresa N
weceno(at)yahoo(dot)com

I love fantasy romance! It's why I wrote a fantasy romance trilogy. I know exactly where you're coming from. Sounds like a great read, Ciara, I wish you the best with it!

Nicole - Then you totally get it.

I'm so happy to see Ciara here. Hi, Ciara! I'm glad you didn't listen to what couldn't be done and just did it. Good luck with the book!

If there is PNR and SFR...why can't we have FR.

Ciara, wonderful post! I laughed and I could relate. I'm a big fan of fantasy romance. Yes, romance readers do like fantasy whether they have dragons or not!

Theresa Milstein - I'm glad I did too. :) It's nice to see you here. Thanks for commenting.

Christine - I'm so glad I posted this. I'll be honest for a minute I thought they were right. Thanks so much for commenting. Good luck. :)

Ciara--Good for you writing the story you wanted to tell. Of course you can combine fantasy with romance.Look at Elizabeth Vaughan's books and C.L. Wilson's, too.

My first fantasy romance will be out in July as well. I love cross-genre books.

Thanks for sharing Ciara. It's hard to be a writer that can't go into a bookstore and find exactly where you'd be - it seems to be such a defining thing for so many readers and publishers as it translates into how they'll market it. I'm so glad your story is published, I bought it already and cannot wait to read it! Congratulations on the book, the genre-blend and the success that will follow!

Thanks for sharing! I think we need more fantasy romances. Romance is found in all the fantasy books I've read either... Lord of the Rings? It contains a great romance between the elven princess and the near immortal warrior (though it's not the basis for the story....oops, I think my nerd is showing!). But I think romance is found in every story, it might be in the words, imagery, or the actions of the characters, but it's there. What is it called if there isn't romance?

Can't have fantasy and romance, what kind of crazy talk is that?! Silly people. The book sounds awesome!

Alexis - How exciting. I'll keep an eye out for it.

Sasha - Thank you so much. I hope you enjoy the story. Feel free to let me know your thoughts when you are done.

Cherie - I'm glad you agree. Good luck with the contest.

If the book is great and well written it doesn't matter if there is fantansy and romance mixed together. If nothing else it will make for an interesting read

I just found out about your book hop from Fangtastic book blog. I hope I'm not to late to join in. I'm about to go to all the sites and see what's going on =) What I've read so far about your book I've loved. I just dowloaded the sample from Amazon. Please count me in for a chance to win. Thanks
Tanyaw1224(at)yahoo(dot)com

buy klonopin online will .5mg of klonopin get you high - 2mg klonopin vs 10mg valium