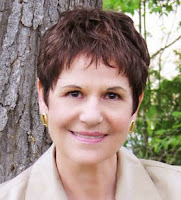 I'm excited to welcome author Barbara Kyle to my blog today! I've asked her to talk about the writing process because so many of my followers are fellow writers, and we're all in this together, right?

I was an actor for twenty years before I became an author, and that was excellent experience for writing. It gave me a bone-deep sense of dramatic structure, which is fundamental to creating compelling stories. And, of course, speaking dialogue in dozens of scripts was ideal for honing the skill of writing dynamic dialogue.

However, acting is an interpretive art – you re-create what the screenwriter or playwright made – whereas writing is a creative art. So I had to learn the creation the hard way, just like any beginning writer, by throwing out draft after draft, cutting the flab, until I’d distilled just the people and their story.

Nevertheless, writing is a lot like acting. You create each character to be as individual as possible, but each one will always be filtered through one’s own life experience and world view, one’s own heart and soul. I think that’s why very young writers often are rather one-note: they haven’t lived enough, seen enough of the human condition, witnessed the astonishing variety of people in our world to convey that variety authentically. Personally, I find it’s a treat to inhabit different people’s skins via writing. I must say, I love writing male characters for this very reason.

Perhaps paradoxically, I read more non-fiction than fiction, and on any topic as long as it’s well done. I recently read Adam Hochschild’s “To End All Wars,” a stunning and heartbreaking book about World War I and the brave Brits who refused to fight and went to prison for it. He’s such a fine writer, I then searched out his “Bury the Chains” about the English anti-slavery movement in the 18th century. I think today’s writers of narrative non-fiction do some of the best writing of our time, because they immerse the reader in morally ambiguous situations, and that’s exhilarating for the reader. I hope I’ve accomplished some of that with Entrapped.

And now for Barbara's New Release!!!

Entrapped is a thriller of high stakes: life and death, love, and oil.

Set in Alberta, Entrapped is the story of Liv Gardner, an ambitious young oil executive intent on stopping farmer Tom Wainwright who is sabotaging her rigs after a spill of lethal “sour” gas poisoned his wife. Desperate to save the company she built, Liv plants evidence to frame Tom. But when the evidence is used to indict him for a murder he didn't commit, Liv alone can save him.

"Kyle has peopled a landscape of smoke and poison and vast natural beauty with a cast of vivid characters, and none of them, from the slick oil baron to the vengeful radical to the not-quite-professional investigator are quite what they seem ... many jolts and twists and turns that will leave no one unsatisfied." Giles Blunt, internationally acclaimed author of "Crime Machine"

You can buy Entrapped on Amazon, and Barnes and Noble.

Super guest post. I had never considered acting and writing as being connected but I think you made several very valid points. Thanks for getting my mind chugging along this early! LOL

Aubrie, thank you so much for this opportunity to reach out to your readers. Emerging writers out there can also find lots of info for writers at my website. Thanks again! - Barbara

Very intriguing post. I'd never considered the connection between acting and writing.

Your book sounds fabulous. I can't wait to read it!

Thanks so much for sharing.

Sutton Fox, thanks for your kind words! Enjoy ENTRAPPED. (I enjoyed a look at your website - nice :)

Laurie, I'm happy to "get your mind chugging." That's what it's all about!

Cher, I'm glad you liked the post. I enjoyed a look at your blog and must say I love the deletion of "aspiring". Well done!