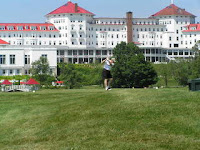 Yesterday I played a wedding at the Mount Washington Hotel, way up in northern NH. It was beautiful. The bride chose Canon in D by Pachelbel for the wedding party, and the traditional bridal march for herself.

Rumor has it this hotel is haunted. I've taken photos of orbs on their stairway before, but this time nothing happened out of the ordinary.

I know the movie got mixed reviews, but I'm not expecting anything really Oscar-worthy or the answer to world peace. I just want to have some fun.

I'm also working on a tie in novella to the New Dawn series called A Hero Rising. Novellas are usually 30-45k and I'm at 20k, so I'm getting close. My goal is to finish it in the next week or so and start the final book in the series, which is due in December. (AHHH! Don't want to think about that now!)

What's everyone else doing this weekend?
Posted by Aubrie at 9:50 AM

I so want to see Cowboys! You'll have to let us know how it was :)

And I envy any author that can write a novella. I've tried a few times and, by the time I finished, had something well over 80K. I can't write anything under that. I'm learning to deal :D Good luck! I'm starting PARADISE 21 tonight!

That hotel is really pretty.

You'll have to let us know how Cowboys vs. Aliens is.

Good luck finishing the novella and writing book three. I can't wait to read them.

I'm so excited your book is out. I just posted the Amazon link on Facebook. I started reading the book today and writing the review. I like the subtle changes, so far.

Oh, the hotel is gorgeous! Did it inspire any new stories in you? I can't wait to hear what you thought of the movie. I've heard mixed things too, but I still want to see it. Good luck with your writing!

Busy with a book tour of two counties until the end of October! Hope I have the energy...

Hope you liked the movie. I liked it a lot. It was fun. Good luck with your novella! Those are always fun to write.

True confession: every time I have a meeting with a bride and they want to hear Wagner's Bridal Chorus for preview, I kind of ... weigh down on it a bit and hopefully they choose something else. (I would never do this in a wedding if chosen, but I hate it SO much.)

Let us know how Cowboys and ALiens was!

Just read on Theresa's blog your book review. Congratulations on it's debut.
I also write. You are welcome to stop by my blog and look around.
Have a good weekend.

I really want to see Cowboys and Aliens but I'll have to wait. Husband was in a chess tournament at the weekend, and next weekend he's visiting his dad. Hope you enjoyed it.

Isn't that the hotel from "the shining"- although that one if I recall is in Colorado.. But looks an awful lot the same.

I haven't seen the movie and have heard it's actually alright.. But.. I can't get over the fact that it's.. Cowboys.. Vs. Aliens... Seriously?!