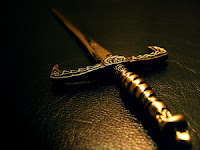 Thank you to everyone who commented on my last post with advice! I've been spending the last two days soaking it all in, every word of it, and here's what I came up with.

A low buzz in Artem’s inner ear distracted him from his verses. His eyes flitted in the shadows, searching for a gnat or an alderfly, but scant insects lived deep within the moss crusted temple walls and the drone seemed more complex than thin wings batting air. Beseeching him and disgusting him all at once, its dissonance reminded him of a mournful moan, tinged with a bittersweet aftertaste like stale wine on his tongue. As it gained force, the prayers of the other acolytes halted in mid sentence. They turned and stared wide eyed at the shadow hidden tomb in the back of the crypt.

Artem put his faith in Tefler, turning to the older monk. “Can it be time?”

Tefler’s once stoic face twitched with a zeal Artem did not recognize. “We must open it to be sure.”

The other acolytes backed away and fled down the torch lit tunnels, knocking candles to the ground with their long robes. Ignoring their retreat, Tefler rose from the kneeling position and cleared a pile of moldy tapestries from the tomb. He leaned over the crumbling stone. “Help me lift the lid.”

Artem contemplated escaping the narrow confines of the underground crypt before stepping forward. A kernel of determination held strong against the wavering currents in his heart. He had devoted his entire life to this event, and he would not abandon his purpose now.

The black ink of his painted head bled with sweat between the braids on his skull, trickling down his temples. Smearing it with the back of his hand, he joined Tefler at the foot of the tomb. Together, they pried the lid from the base and heaved. The cover shattered on the flagstone and a cloud of dust and decay wafted up from the depths. Waving his arms to clear the haze, Artem peered inside.

Sir Grismore’s armor clad bones stared back at him, his bare teeth grinning in a mask of defiance. The knight’s skeletal hands grasped a sword, thick as a mule’s leg with an olivine hilt decorated in crude malachite stones. The humming gained force and the vibration of sound shattered the boney fingers clutching the hilt to splinters.

Better? I think so! I'm planning on finishing the story today and sending it to my critique buddies.
Posted by Aubrie at 8:56 AM

Ooo...it's so cool! I like it a lot better than the first paragraphs. Can't wait to read it!

Very visual! You use the words well to paint a vivid picture.

I'd shrink the first paragraph. It's written well, but it would be better to get to the tomb faster. The only other comment I have it to use "scalp" or head instead of "skull" when he's sweating.

I could see the scene and feel the tension.

That's wonderful. A much stronger opening, though I liked the first one too. It makes it much more personal. I especially like the fingers breaking with the hum of the sword. I'd be happy to beta read, but I'd probably just say, "Ohhh love it!"

Oh yeah. This one grabs me. Good job.

Beautiful. I could really get into the story here and feel like I was there experiencing all of this!

Great job! I loved how you wove physical descriptions into the action (sweat on the skull between the braids). The tension was wonderful. I wanted to read on!

Good luck with your critique group!