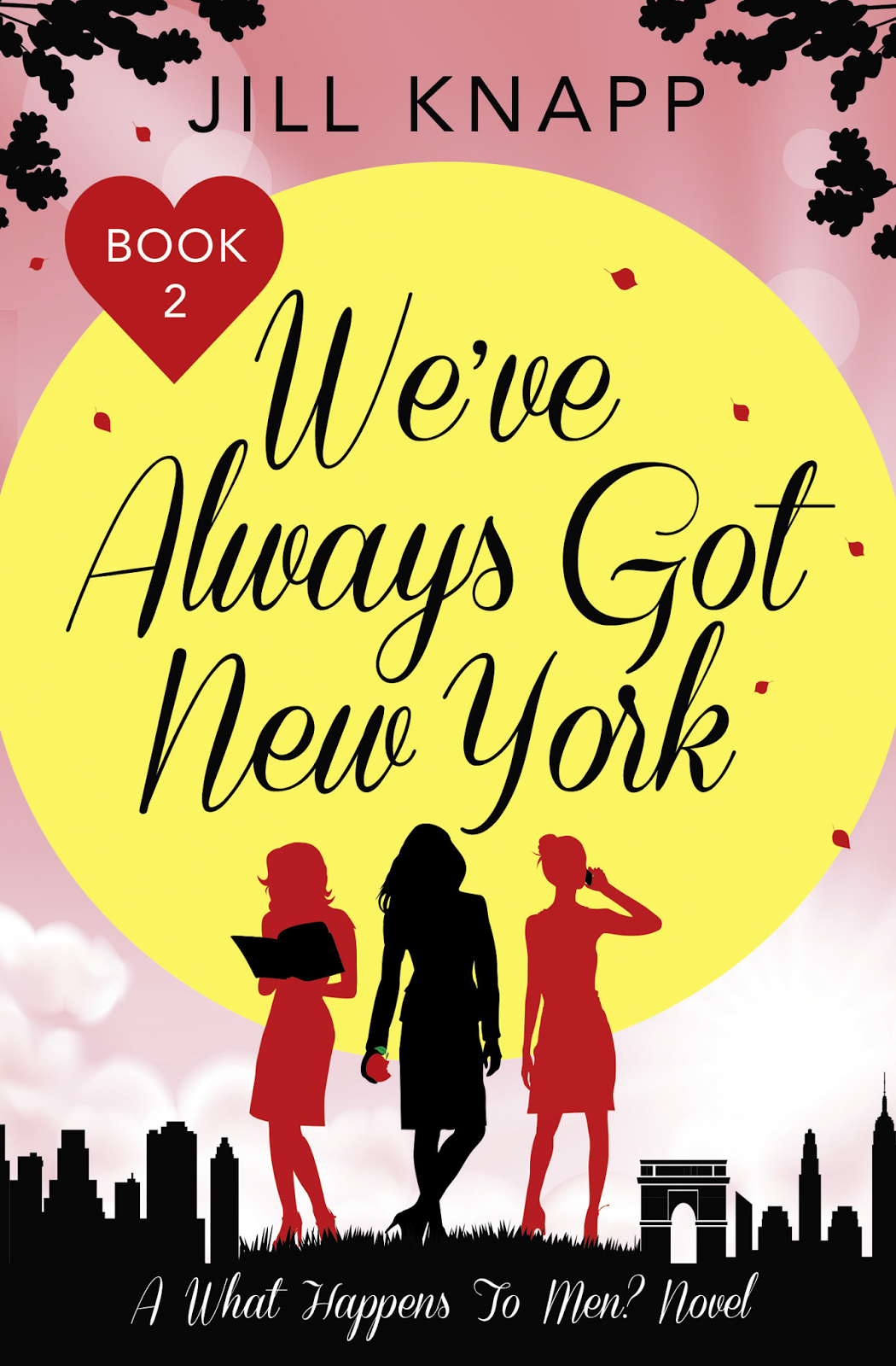 Today we have the first glimpse at the cover art of HarperImpulse author, Jill Knapp's next book, "We've Always Got New York", coming out November 20th! This novel is book #2 in the "What Happens To Men..?" series, which is now available in paperback in Great Britain. The first book has gotten rave reviews, and has divided its readers into two groups. Are you on Team Michael? Or are you on Team Hayden?

"We've Always Got New York" picks up after Amalia Hastings returns to Manhattan from her trip to Brazil to find that life has in fact gone on without her. Fresh off the plane, she is left feeling anxious and unresolved, left alone to pick up the pieces, and deal with the repercussions of choosing her own path over Michael. Amalia finds herself without an apartment, without a job, and starting to wonder if she's even without a best friend! 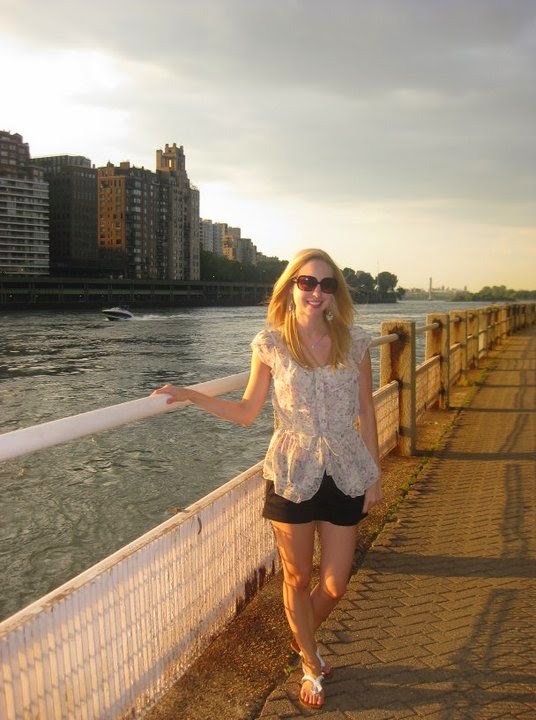 Now here's a sneak peak at the first chapter of "We've Always Got New York"!!

­­Chapter 1- Amalia
I could tell by the look on her face that she was expecting something from me. She was expecting something to be different. For me to be, in some way, changed.
I’m Amalia Hastings, and on August 20th at 9:17 pm, I was home.
Home. The word seemed funny to me because I didn’t have a home to go back to. I moved out of my apartment right before leaving for Brazil and after my friend-with-benefits, Michael, showed up at my apartment, asking me to stay. I hadn’t thought it through properly; I just knew I didn’t want to live in that apartment anymore. Before my trip to Brazil I packed up what little stuff I owned and put it in storage for when I returned, assuming I would deal with it then. Well, “then” has become “now”. So for tonight I was staying with my best friend Cassandra. Who was currently waving at me.
I knew what she wanted. She wanted stories. Juicy ones that involved hot hookups on the sand. She wanted to see pictures. Pictures of the places I went, the food I ate, and the hot guys I met. She wanted me to run up to her in a sun dress, hair braided and skin tanned, and explain, no, to pontificate, to her how life-changing my trip was. She wanted me to playfully link her arm around mine and gush about how amazing it all was. How I was changed forever. That I had a new appreciation for life, food, and music. She wanted me to tell her that I would never be the same.
But this isn’t the movies and I’m not Julia Roberts.
The florescent lights above me flickered, making the airport look dark and ominous. I looked down at my hand as I pulled my rolling suitcase across the sticky, tiled floor. Not even my hand had acquired a tan. Three months in the Brazilian sun and my skin remained as pale as ever.
Cassandra was looking right at me with wide, unblinking eyes. I walked a little slower.
For some reason I couldn’t pinpoint, coming off the plane felt like a surreal experience to me. Although I was relieved to have landed, and I wouldn’t have wanted to stay in Brazil any longer, I still wasn’t utterly happy with being back. I wondered if it merely had to do with the fact that I had no apartment to go back to and was feeling pretty untethered from not having a proper home.
There’s an old saying. I’m not really sure where it’s from or who said it first. Kind of the proverb equivalent of The House of the Rising Sun. It proffers, “Wherever you go, there you are”, and up until about one month ago I had no idea what it meant. But now it means everything. It rings in my ears like a scolding mother, repeating itself over and over again until I submit.
I finally stood face to face with Cassandra, who was grinning like a fool at this point. She was dressed down for the night, wearing a purple racer-back tank top that showed off her summer glow, jeans, and gold flip-flops. Her blonde hair was pulled into a loose, messy bun and her make-up was minimal, apart from the extra-shiny, coral lip-gloss she was wearing. She reeked of summer.
“Hey,” I offered, looking down at my sneakers. I wished I had more energy for her, but after ten hours on a plane it was all I could muster up.
Cassandra cocked her head to the side and smiled. Her hair swung back and forth and she popped her hip out like a model in training. She looked as fierce as ever, even dressed-down in comfortable summer clothes.
“That’s all I get? Get over here!” she said, pulling me in for a hug.
I hugged her back for a moment and then pulled away, overcome with exhaustion and jet-lag. I smiled at Cassandra. She smelled like a salty coconut and I realized she had probably come straight from Fire Island, a beach not too far from Long Island and just outside of the city. That explained the dressed-down attire, but not the lip-gloss. Unless, of course, we were going straight back there from JFK airport.
I looked back at the gate. Most people I knew hated airports, but I liked them. They offered a chance to escape. Get on a plane and in six hours from now you could be across the country. You could be in a different town, in a different house, with a different group of people. I think we all took that for granted.
I could go back to Brazil right now. Or I could go somewhere else. I’ve never been to Cincinnati; I wonder what it’s like there. Or maybe Savannah. I could definitely live in Savannah! I took a step backwards, away from Cassie. Back toward the inside of the airport. She just smiled.
“Very funny, Amalia!” she said through perfectly white teeth. “Don’t sneak away from me now. I’m so glad you’re back, I really missed you.”
Cassie threw her arm over me and smushed our faces together. She whipped out her iPhone and flipped the camera application around so the front lens could be used and snapped a picture of the two of us. Before I knew it, she uploaded the picture to Facebook with the caption “So excited, Amalia is officially home!”
Without glancing back, she walked a few feet in front of me and remained glued to her phone. The back of her Havaianas smacking onto her heels echoed throughout the now nearly empty hallway. I let out a long sigh that Cassandra didn’t hear and pulled my suitcase toward the exit. Yep, it was official. I was home.
Posted by Aubrie at 12:00 AM