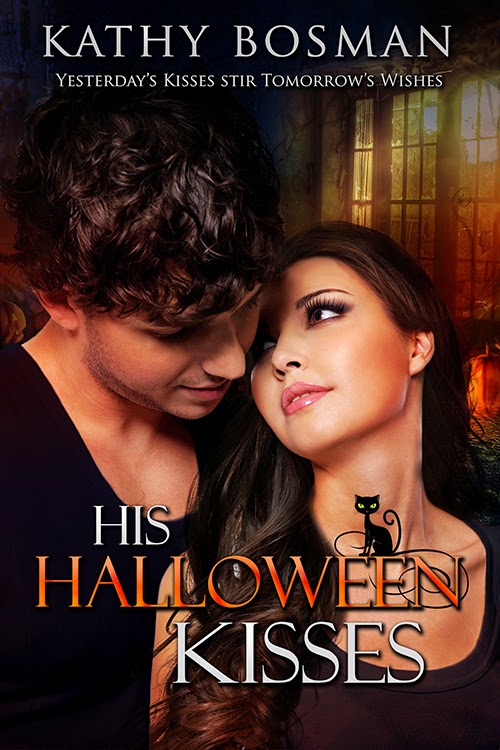 Ali’s never been so scared. She’s housesitting for a colleague on Halloween night, but the lights have gone out, and terrible noises and crashes send her imagination into overdrive. When her brother’s friend comes to her rescue, he kisses her in the dark three times. Once back in the light, Ali is embarrassed at allowing him to kiss her. Byron tries to ignore his strong attraction for Ali, especially seeing he’s not ready for a relationship. When Ali finds out why, she runs away, but life has other plans. What can bring them together? Fate, faith, or the memory of his Halloween kisses?

The TV made a fizz, and the light from its screen compressed into a small dot. All the lights in the house went out.
A power failure.
She sat frozen for a moment, unsure what to do next. This wasn’t her own home. Where did they keep candles and torches? At her place, she stored them in the kitchen drawer, and so did her parents in her childhood house. Wouldn’t that be the logical place? Blinking furiously, she hoped to find some light somewhere to guide her to the kitchen without bumping into something. Nothing. She couldn’t see a single thing. There was no moon tonight. Probably as overcast as it had been the whole miserable, rainy, windy afternoon. She spread out her hands in front of her and walked slowly, one awkward, terrifying step at a time.
In the darkness, the sounds were magnified. Wind whined like a strangled prisoner through every window, door crack, and ceiling board. Something tapped at one of the windows from the dining room. Tap…tap…tap. Probably just a branch from a nearby bush. It couldn’t be a ghost or a zombie, could it? Her quickened pulse didn’t believe any logical arguments tonight.
Images streamed through her darkened vision—pictures of real witches, zombies with bared teeth and deathly pale faces, and horrible creatures with horrific wolf-like snouts and sharp fangs. She shivered. For some reason, tonight, Halloween was getting under her skin.
And not in a nice way.
A crash sounded in the kitchen.
Her leg remained poised for the next step, but she couldn’t take it.
She couldn’t go in there.
What was that? Terror strangled her a moment, making it hard to breathe.
Possibly only the Bauman family cat, their little black and white tabby. A smile curled her mouth in response to the calming thought. Black cat—bad luck. Yeah, she sure was overthinking this whole simple inconvenience of a power outage.
Something brushed past her leg, something warm, soft, and silent.
Hot tears sprang to her eyes.

She felt his breath upon her face, heard him mumble something, not sure what. His voice was right by her ear, or so it seemed. The wind drowned out what he’d said, but all she wanted to do was feel him, sense him, allow him to take over her senses fully, so she didn’t feel any more fear.
Her heart went crazy. He was kissing her. His mouth pressed on hers, exploring her lips with such courage, such boldness, such impudence. How dare he?
She wanted to slap him, wanted to pull his hair, wanted to shout to him, “Get out! Who do you think you are?” but her body didn’t listen. Her lips sought his with fervor, with need, with joy. They moved up and down, exploring every texture of his mouth, the plumpness in the centre and the way they tapered out thinly to the edges; the moist, softer part just on the inside of his mouth and then horrors, she touched his tongue, just the tip, but it sent a swirl of pleasure through her, causing her heart rate to soar through the roof. She felt like she plunged the depths of mischief, of intrigue—kissing a stranger in the dark.
His hands brushed the back of her neck, and fingers ran through her hair. He stroked her wet cheek, oh so gently, while his mouth still remained on hers, locked in the sweetest kiss of her whole lifetime so far.
Should she pull away first?
She couldn’t. She didn’t want to.
She needed this. Needed to forget everything. The confusion of the last few months. The uncertainty. The fear.

Kathy loves reading and writing even more. She homeschools her three kids, so in between unsuccessfully explaining the difference between subject and predicate or how to divide fractions, she enters an imaginary world of troubled and passionate characters whose stories take over the page. Kathy lives in Kwazulu Natal, South Africa, where the summers are hot, the winters cool, and bugs thrive. Her first published novel, Wedding Gown Girl, came out in 2012 with Astraea Press. She belongs to the Romance Writers of South Africa Group (ROSA) which has been her greatest support and inspiration the last few years.

Thank you for hosting me, Aubrie!!

You are very welcome!

Love trick or treating w my kids, probably only a couple of yrs left as they are getting too old..then I have to wait for...grand baby time!!!!

I like everything about halloween. It brings out the kid in you.