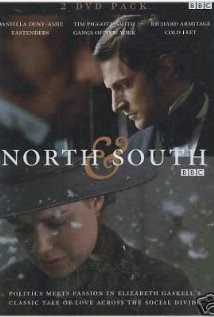 My goodness, how did this get past my radar in 2004? I loved, loved, loved it! It was like Pride and Prejudice all over again with the proud and mysterious Mr. Darcy character and the witty and smart Elizabeth. Except, this takes place in Northern England in the mills, and there aren't that many pretty dinner parties (which I did miss, though). Also, you get to see the poorer side of things, which really isn't discussed in Pride and Prejudice. There's more history and heart to it, making this mini series such a great tale to watch! I'd say it has a lot of the same atmosphere as Great Expectations but with a happier ending- thank goodness!

I did not know who Richard Armitage was before watching The Hobbit. He captivated me as Thorin Oakenshield, and it was so nice to see him act as the love interest- and a human- in a period piece. Who knew a dwarf could be so tall? He's also in a Robin Hood series, but he plays the bad guy- so that's not as much fun to watch as this. His character (Mr. Thornton) is not perfect, but it's his flaws that make him human. You can't prejudge him. It takes a while to realize why he is so severe, but when you do, your heart opens up.

And Brendan Coyle (Mr. Bates from Downton Abbey) is in it!! He's playing the same down on his luck, good-hearted, rough edged character in this. It was neat to see him as a younger man- although it's only been 8 years difference between now and then. He does look different, though. From his perspective, I understood every angle of this argument between the mill workers and the employers. It's a tough situation for everyone involved, and like he says in this movie, being on strike is like going to war.

There's a lot of sadness, and few terrible deaths. But, the last scene is soooo worth every minute of all that harsh reality. That is all I'll say on the matter!

If you haven't seen it, and you enjoy all those period pieces like Pride and Prejudice and Jane Eyre, then I suggest you give it a try! I'll be owning the DVD set of this so I can watch it over and over in the future.I watched it for free on Netflix.

OMG yes! I love this one. My heart explodes when Mr. Thornton says, "You don't need Henry to explain." *swoon*

I liked it so much I even read the book. Both are good but I adore the mini series.

I'm a HUGE fan of North and South. I loved the book when I first read it twenty yeas ago and Mrs. Gaskell became one of my writing heroes.
When I first saw the movie, all I could mumble for hours was, "Who... is... that... man???"

I'd been drafted into the Armitage Army and didn't even know it. :)

This is one of my favorite movies ever! I watch it on Amazon at least once a month. Just hearing the intro music soothes me ans I get ready to hear Richard's voice.