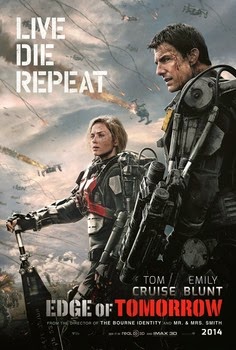 It's not everyday that I exclaim out loud- in the middle of the movie- several times- "Wow, this movie is awesome." Edge of Tomorrow may be the best sci fi movie since District 9. Even though it echoes Matrix, Alien, Starship Troopers, every video game out there, and even World War 2, it has enough originality to bend my mind with twists I never imagined.

This is spectacular writing. Tom Cruise is not the indestructible hero he's used to playing. This makes him more likable and gives him deeper material to work with, showing just what he's capable of. He turns a slick, PR representative for the military who's scared of blood and will blackmail the chief just to get out of fighting into a determined warrior who will die over and over again and give up his life to save the world. That is quite a character arc, and it was excellently written and excellently played. Well done, Tom Cruise. (As if he needs my praise)

Emily Blunt is fantastic. She makes me want to take up my own metal blade and slash some Mimics. Wow. She is the real hero of this film. She's the one who whips Tom Cruise into shape after stealing his battery pack from his dieing body. She's a no nonsense, get this done kind of gal. She's not into romance or even getting to know Cruise. All she wants to do is stop the Mimics. Her back story is awesome, by the way.

Perhaps as a nod to Alien, they had Bill Paxton. Except now he's not the whiny guy who thinks they are all going to die. He's the older, war hardened general who's not afraid to battle these Mimics head on. This is quite an ironic twist, and I was glad to see him involved.

There are poignant scenes interspersed amongst all of the brilliant action which makes this movie so wonderful. I can't mention too many here because it will spoil the movie. But, there's one where Cruise knows anything he does beyond a certain point with kill Emily Blunt, and the way he stalls, relishing every moment with her is excellently written.

Besides, that, there are so many philosophical musings I had during this movie. For instance, on the first day of the mission, a member of Cruise's squad is cheering because he made it to the beach. Then, without even seeing it, a ship squashes him. The second time, Cruise warns him, and he has just enough time to see the ship before it kills him again. I thought to myself: would I want to see it or would I want to die in ignorant bliss?

This kind of thought provoking sci fi is why I love the genre so much. Highly recommended.

Ahhh! I am so glad it's a good film! I read the book it's based on "All you need is kill" and really hoped they could bring it to life.