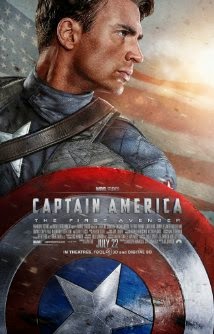 Okay, so I boycotted this movie because I learned somewhere that- spoiler alert- Captain America and the girl he loves don't end up with a HEA (Happily Ever After) at the end. I had heard something about him being frozen, and then I watched The Avengers and it was clear he wasn't in the right era. SO, I didn't want to be disappointed.

BUT, it turns out I missed out on a really cool movie all because of my prejudices. The best part about this movie is how it deals with bullying. Captain America doesn't like bullies, and that's why he stands up to them even if he knows he can't win. What a great message for kids. He's not a strong body builder from the beginning- he's actually a kid that got bullied a lot growing up- which made him extremely likeable and believable in the Captain America role.

I loved the flavor of history throughout. The 1940's period clothing, automobiles, and atmosphere grounded this movie in reality. Captain America is a cheesy role model meant to get people to buy war bonds, which is probably exactly what they needed at this time in history and exactly what Captain America would be doing. Very realistic. The only part that became a little too much over the top was all the random action scenes in the middle of the movie. I would have liked a little more story. But, we all know what sells movies nowadays. Got to have those big explosions!

Captain America's love interest, Peggy Carter, is a formidable soldier and a very cool character. I would have liked to know more about her- why she became a war general, and why she's over in America helping the program Captain America is in. And what happens to her!! What does she do when she never gets that dance? Does she find someone else or spend her whole life pining after him? Maybe they'll address this in the new movie out right now.

The other famous actors did not disappoint. Tommy Lee Jones is a fantastic hard-faced, no nonsense war general. Love every movie he makes. Stanley Tucci plays a role with much more heart than his comic, blue-haired television show host in The Hunger Games. It was nice to see him act in a role with more dimensions. When I saw Neal McDonough I couldn't quite place where I'd seen him before- until I found an old picture of him in Star Trek First Contact!!


Everything ties back to Star Trek, now doesn't it?

Anyway, I plan to see the second movie soon, so I'll have my review of that up when I do!

It's a good one for sure! I'm so glad you finally watched it.

They do have a scene with Peggy in the new movie. But there is also a Peggy One-Shot on one of the Marvel movie dvds. I haven't seen it yet so I'm not sure which one it is. (Heard about it when they did that Marvel special on ABC a few weeks ago)

I liked Captain America but Iron Man 1 and 2 were my favorites for the Pre-Avengers movies. But I have to say that Capt 2 is my favorite for the Post Avenger movies.

Neal McDonough also played on Scifi's Tin Man miniseries and he was in Red 2. He shows up in unexpected places. Loved him in Tin Man but not as much in Red 2 then again he was a bad guy so you weren't supposed to like him. ;)

I've been wondering about this movie. Thanks for the review.

Your book blurb is up on my blog!
http://theresamilstein.blogspot.com/2014/04/aubries-alliance.html