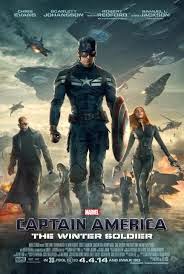 At first I thought the "Winter Soldier" referred to Captain America. I don't know why- maybe because he was frozen. But, the winter soldier is someone you'll never guess, and I won't say so here because I don't want to spoil it. But, his identity makes the movie all that much more interesting.

I really enjoyed the thriller atmosphere. Not all superhero movies keep you on the edge of your seat with plot twists, and the "who can you trust" game. But, this one did. I couldn't figure out who the real villain was. I would have given the evidence to the wrong guy and gotten killed in the first fifteen minutes! Good thing I'm not Captain America, eh? I did, however figure out the identity of the winter soldier before his mask came off. There are hints from the first movie, and that's all I'll say here.

Scarlett Johansson was fantastic and looked awesome in her Black Widow outfit. She played the "not quite" love interest which brought a lot of humor to the movie because we all know they're not meant for each other. He's way to proper and pure for her slippery spy girl persona. He seemed more like a little brother to her in my opinion. There is talk the Black Widow get her own movie, which I think would be great.

I'm so glad they brought back Agent  Peggy Carter. They did such a nice job with the make-up making her look older, yet still the pretty girl from his time. I'm so glad she led a fulfilled life and that he gets to see her again. This scene was one of my favorites.

The over arching theme of freedom verses oppression/dictatorship is a little overdone. But, they did put a new spin on it with the thought they could predict everyone's path and eliminate the baddies from the do-gooders. It was a little preposterous. But, it's a super hero movie, so what did I expect, right?

I can't wait to see where the third movie goes from here. Captain America has some loose ends to tie up, no love interest in sight, and  the world is pretty messed up with what happens with SHIELD. The three movie series arc is shaping up rather nicely.

I loved Winter Soldier (saw it twice opening weekend. May try to go again before it leaves the theaters. My favorite of this Marvel sequence.

I wish Maria Hill had more screen time. I love her snarky attitude. Not sure what I think of Emily VanCamp's character. I liked the central room standoff but I still have a hard time seeing her as anything other than her character on Revenge.

I want more of the Winter Soldier. Definitely improved this movie. Oh and the flying suit for Falcon was awesome. I want one.