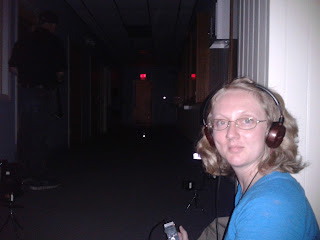 Okay, for those of you out there that don't believe in this kind of thing, READ NO FURTHER. As for me, I love watching those ghost hunter shows on the Syfy channel, and I wanted to try it for myself.

My sister-in-law is the resident spiritual medium for the North East Paranormal Associates, so she let me and my brother go on one of their private investigations of the Newmarket Town Hall.

NEPA have events for the public, but there are usually so many people at those events, you can't get the same experience. So, I felt very lucky to have a "connection."

If you are interested in what my sister-in-law does, here's her website!  She does take clients over the phone, so you don't have to live in the area to meet her. Some people say she looks like me, but wait until you see my brother. He's like a guy version of me!

Here he is listening to the recording we're taking down in the basement. It's pitch black, so his eyes are closed. This picture is taken with a flash. 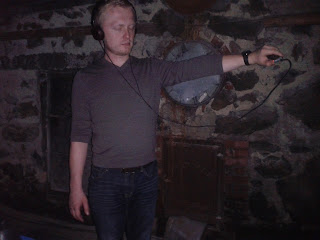 The Newmarket Town Hall has a rich history. From Wikipedia: Incorporated in 1727, Newmarket is one of six towns granted by Massachusetts in the last year of the reign of King George I. It started as a parish of Exeter, and was granted full town privileges by the legislature in 1737. It was probably named for Newmarket in Suffolk, England. The Lamprey River, running through the town, was named for John Lamprey, an early settler. For a while, the town was called Lampreyville. Newmarket was a center of the New England shipping trade with the West Indies, including importation of sugar and African slaves.[2]

Here is a post card from  1912 when the town hall used to be a Catholic Girl's school.

What surprised me the most about my experience was how alike it was to the TV shows I watch. These people are real professionals. They have all the equipment needed to record evidence, and a "home" station set up where someone is watching all of the cameras in every room. I did manage to take some orb pictures, and we did get some activity in the girl's bathroom on the bottom level of the building. The device I'd brought with me to measure EVP's flickered, and even went on and off in response to some of my sister-in-law's questions. Very neat.

Whether you believe in this kind of thing or not, if you enjoy watching the TV shows or even just enjoy historical places, then this would be a great experience for you!

Ooo, that sounds so cool, Aubrie! I've always wanted to go on a ghost hunting excursion. :)

That's so awesome! I'd love to go ghost hunting. Even neater that you got some activity while you were there. I know there're times when ghost hunters go to places and absolutely nothing happens.

What fun! I happen to believe in spirits and psychic phenom, even though there are certainly some wacko cons out there. And hey, my sister is a licensed hypnotherapist. :)
I'm following your blog now.

Sounds awesome! I don't really like the shows on television, seems every time I tune it NOTHING happens. But, I do believe. I'm sure this was an amazing experience.

Nice Site I Am Impresed