My Vacation at Foxwoods 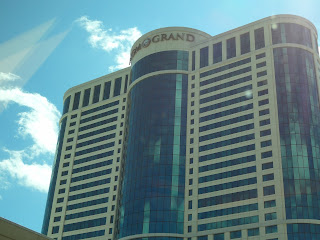 So, I've always wanted to check out Foxwoods, since it's only a two hour drive from where I live in NH to CT. They have summer packages that include a hotel room and a show for as little as $209 for two people for one night. So, we decided to go down one day, stay the night, watch a show, then drive back up the next day. It was a great! We didn't win anything big (just played the 1 cent slots machines), but the show was excellent, and it was fun to walk around and see everything going on.

There are three giant hotels at Foxwoods. We stayed in the MGM Grand. Our room had a nice view of the woods surrounding the facility and the swimming pool down below: 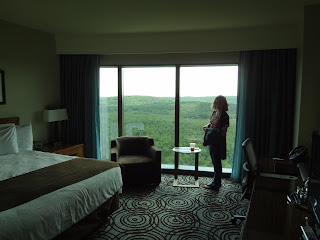 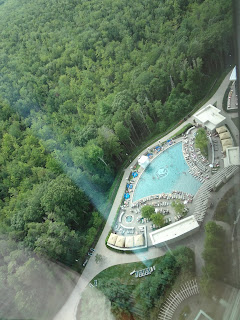 As you can see, we were up pretty high on floor 26. Although the pool looked nice, and the water was warm, we didn't have time to go in. Maybe next time? 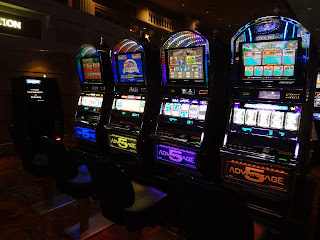 There are slot machines everywhere, and I was surprised to see so many people playing them. It shows on the screen how many credits people have. (We had 500 which amount to 5 bucks) Some people had thousands of $ in credits! Do they just stand there all day and play? Maybe. Who knows? The slot machines weren't all that much fun for me, because there is no skill involved, only chance. I'd much prefer a game where I could get better and have some control over the outcome. I'd feel like I had earned my money instead of just getting "lucky." but that's just me. 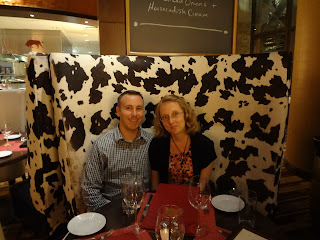 We ate out at a fancy gourmet steakhouse, which (thankfully) had options for vegetarians. I had a tasty salad with goat cheese and walnuts, and some spicy mac and cheese with apples. Yummy! I did not, however like the bread, which smelled like cheesy old socks: 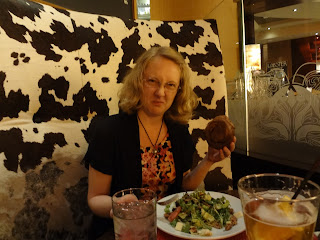 The waiter claimed it was a garlic and cheese popover, but I could have sworn they'd left it in the basement all month. 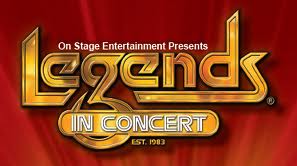 The show was excellent. We saw, Legends in Concert: celebrity look-a-likes that not only looked like the legends, but sounded like them as well. There was a Neil Diamond, a Lady Gaga, Barbara Streisand, and Donna Winters, all singing the hits they are famous for like "She works hard for the money" and "Sweet Caroline." I couldn't believe how close they were to the originals and what phenomenal voices they had.

The best part was, you got to meet them afterwards:

Guess who this is: 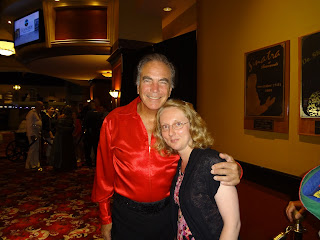 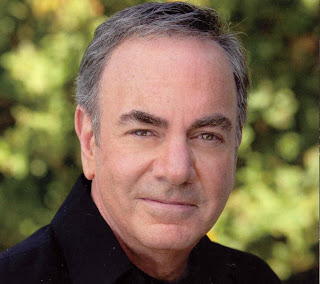 And you know who this is: 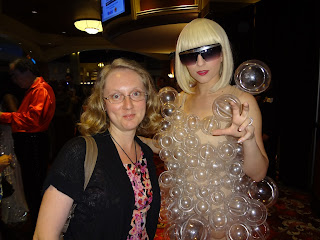 Would I recommend Foxwoods? Totally. But, not for the gambling, unless you're a poker player- because they have a whole room for that downstairs. There's much more to do there, including swimming, a spa, bowling, great restaurants, and great shows. Watch their calender, and choose a night for a show you'd like to see. They have famous comedians, singers, and shows straight from Las Vegas. The hotels rooms are beautiful and clean, and the atmosphere is very safe- like a big mall. The shopping is expensive, but there's a lot to look at.

Thanks for reading about my trip!

Sounds like you had a great time! I wouldn't mind trying the slot machines, but you have to wait until someone's been playing for a long time and then leaves. That way you can have a better chance of winning. I do enjoy Poker and Blackjack, but I think those types of things are more for people who gamble more than once. LOL!