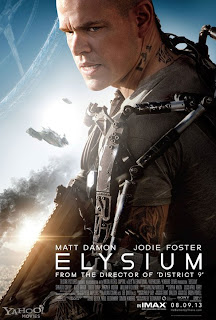 Elysium takes us into a future where the have-nots live on Earth, and the have-it-alls live on a star shaped space station called Elysium. Matt Damon's character, Max, grew up in an orphanage with a little girl who read him stories. He dreamed of living on Elysium and promised her he'd take her there with him. What he didn't count on were the dismal circumstances they'd be under.

After an accident at work exposes him to a lethal dose of radiation poisoning, he has no other choice but to force his way into Elysium. They have special medical machines there that can fix ANYTHING- even reconstruct a face after a grenade has blown it off.  This is an allegory to the ongoing argument of universal heath care. If noly it were so easy as bringing down a bunch of special machines.

I watched this in Imax, and maybe this is part of the reason why the movie didn't work for me. The camera work is jagged and jumpy, much like Blair Witch Project, which made me dizzy for the second half of the movie and the rest of the day. I had to guess at what was going on during much of the action scenes because of the bumping around. And there were A LOT of action scenes. In fact, I would have liked a few more in depth talking scenes- like how the world got to be so over populated, and how Jodi Foster got her narrow vision of annihilating everyone else to preserve Elysium for people's kids and grand kids. Does she have a family of her own? We never get to find out. Maybe one little romantic scene between Matt Damon and his childhood sweetheart would have been nice. Let them go out for coffee....at least once.

The one thing that held the entire movie together was Matt Damon's performance. He always manages to get right to my heart. I really felt bad for him the whole time and wanted his character to succeed. He is an exceptional actor, and he raises this movie above the traditional sci fi action flick. Kudos to you, Matt Damon.

As a rated R, there are a lot of bad words and violence, so I don't recommend this movie for young ones or if you want an uplifting end to your day. It does challenge you with a striking polarity of the rich verses the poor, immigration issues, and the universal health care argument, so there's some meat to this sci fi, which always makes it more intriguing than the norm.
Posted by Aubrie at 8:53 PM

Guess I'll still be on fence about this movie after your review. I'm really starting to dislike over the top action movies. Wolverine kinda went over the line for me on action vs. entertainment. I don't need another movie to do that.

Thanks for the review.